Challenges in Machine Generation of Analytic Products from Multi-Source Data: Proceedings of a Workshop (2017)

Get This Book
Visit NAP.edu/10766 to get more information about this book, to buy it in print, or to download it as a free PDF.
« Previous: Appendixes
Page 45 Share Cite
Suggested Citation:"Appendix A: Biographical Sketches of Workshop Planning Committee." National Academies of Sciences, Engineering, and Medicine. 2017. Challenges in Machine Generation of Analytic Products from Multi-Source Data: Proceedings of a Workshop. Washington, DC: The National Academies Press. doi: 10.17226/24900.
×

RAMA CHELLAPPA, Chair, is a distinguished university professor and a Minta Martin Professor of Engineering and chair of the ECE department at the University of Maryland. Prof. Chellappa is a recipient of an NSF Presidential Young Investigator Award and four IBM Faculty Development Awards. Prof. Chellappa received the K.S. Fu Prize from the International Association of Pattern Recognition (IAPR). He is a recipient of the Society, Technical Achievement, and Meritorious Service Awards from the IEEE Signal Processing Society. He also received the Technical Achievement and Meritorious Service Awards from the IEEE Computer Society. At UMD, he received college and university level recognitions for research, teaching, innovation, and mentoring of undergraduate students. In 2010, he was recognized as an Outstanding ECE by Purdue University. He received the Distinguished Alumni Award from the Indian Institute of Science in 2016. Recently, he received the inaugural Leadership Award from the IEEE Biometrics Council. Prof. Chellappa served as the editor-in-chief of PAMI. He is a Golden Core Member of the IEEE Computer Society, served as a Distinguished Lecturer of the IEEE Signal Processing Society and as the president of IEEE Biometrics Council. He is a fellow of IEEE, IAPR, OSA, AAAS, ACM, and AAAI and holds six patents. His current research interests span many areas in image processing, computer vision, machine learning, and pattern recognition.

THOMAS DIETTERICH (A.B., Oberlin College, 1977; M.S., University of Illinois, 1979; Ph.D., Stanford University, 1984) is professor emeritus and director of Intelligent Systems Research in the School of Electrical Engineering and Computer Science at Oregon State University, where he joined the faculty in 1985. Dietterich has dedicated his career to machine learning and artificial intelligence. He has authored more than 180 publications and 2 books. His research is motivated by challenging real-world problems ranging from personal information management, to drug design, to sustainability, and most recently to problems in safe and robust artificial intelligence. Dietterich has also devoted many years of service to the research community. He is past president of the Association for the Advancement of Artificial Intelligence, and he previously served as president of AAAI (2014-2016) and as the founding president of the International Machine Learning Society (2001-2008). Other major roles include executive editor of the journal Machine Learning (1992-1998), co-founder of the Journal for Machine Learning Research (2000), and program chair of AAAI 1990 and NIPS 2000. He is currently the moderator for machine learning on arXiv. Dietterich is a fellow of the ACM, AAAS, and AAAI.

ANTHONY HOOGS is the senior director of computer vision at Kitware, a small scientific computing R&D firm based on open source software. Dr. Hoogs leads Kitware’s computer vision group, which he started in 2007 and now has 35 members including 15 PhDs. For more than two decades, he has supervised and performed research in various areas of computer vision including event, activity, and behavior recognition; motion pattern learning and anomaly detection; tracking; remote sensing imagery analytics; image segmentation; object recognition; and content-based retrieval. At Kitware he has initiated and led more than two dozen projects in image and video analysis, involving more than 20 universities and sponsored by government institutions including DARPA, AFRL, IARPA, ONR, OSD, NGA, and others, ranging from basic academic research to developing advanced prototypes and demonstrations installed at operational facilities. Previously at GE Global Research (1998-2007), Dr. Hoogs led a team of vision researchers on projects sponsored by the U.S. Government, Lockheed Martin, and NBC Universal. He has published more than 80 papers in computer vision and has served as general co-chair for the IEEE Conference on Computer Vision and Pattern Recognition (CVPR) 2017; general co-chair for the IEEE Winter Conference on Applications of Computer Vision (WACV) 2016 and 2018; area chair for CVPR (2009, 2010, 2012, 2018); Workshops co-chair for CVPR (2012); corporate relations chair for CVPR (2009, 2010) and the International Conference on Computer Vision (2013); program co-chair for WACV (2009, 2011); organizer for various CVPR and ICCV workshops; member of the Computer Vision Foundation Advisory Board and Industrial Advisory Board; member of the steering committee for WACV. He has served on technical panels for NSF and DARPA, including DARPA Information Science and Technology (ISAT) panels in 2007, 2009, and 2013 and has recently started a 3-year term as an ISAT member. In 2014 he served as an organizer of the National Academies’ National Research Council Workshop on Robust Methods for the Analysis of Images and Videos for Fisheries Stock Assessment, sponsored by NOAA, then joined the NOAA Automated Imagery Analysis Strategic Initiative Steering Committee. Dr. Hoogs received a Ph.D. in computer and information science from the University of Pennsylvania in 1998; an M.S. from the University of Illinois, Urbana-Champaign in 1991; and a B.A. magna cum laude from Amherst College in 1989.

JOHN E. KELLY III (NAE) is IBM senior vice president, Cognitive Solutions and IBM Research. Dr. John E. Kelly III is focused on the company’s investments in several of the fastest-growing and most strategic parts of the information technology market. His portfolio includes IBM Analytics, IBM Commerce, IBM Security, and IBM Watson, as well as IBM Research and the company’s Intellectual Property team. He also oversees the development of units devoted to serving clients in specific industries, beginning with the April 2015 launch of IBM Watson Health. In this role, Dr. Kelly’s top priorities are to stimulate innovation in key areas of information technology and to bring those innovations into the marketplace quickly; to apply these innovations to help IBM clients succeed; and to identify and nurture new and future areas for investment and growth. He works closely with the leaders of these units to drive business development, accelerate technology transfer, and invest for the future. Dr. Kelly was most recently senior vice president and director of IBM Research, only the tenth person to hold that position over the past seven decades. Under Dr. Kelly, IBM Research expanded its global footprint by adding four new labs (including IBM’s first in Africa, South America, and Australia), creating a network of approximately 3,000 scientists and technical employees across 12 laboratories in 10 countries. During his tenure, IBM maintained and extended what is now 23 straight years of patent leadership. Most notably, Dr. Kelly and his team were responsible for advancing the science of cognitive computing through his support for Watson, the groundbreaking system that defeated two standing Jeopardy world champions in 2011. He also led the strategy, negotiations, and transition of IBM’s semiconductor manufacturing business to GlobalFoundries, while maintaining a commitment to leading-edge microelectronics research. Prior to joining IBM Research in July 2007, Dr. Kelly was senior vice president of Technology and Intellectual Property, responsible for IBM’s technical and innovation strategies.

KATHLEEN R. McKEOWN is the director of the Data Science Institute and the Henry and Gertrude Rothschild Professor of Computer Science at Columbia University. She served as department chair from 1998-2003 and as Vice Dean for Research for the School of Engineering and Applied Science for 2 years. A leading scholar and researcher in the field of natural language processing, McKeown focuses her research on big data; her interests include text summarization, question answering, natural language generation, and multilingual applications. She

has received numerous honors and awards, including AAAI Fellow, a Founding Fellow of the Association for Computational Linguistics, and an ACM Fellow. Early on she received the National Science Foundation Presidential Young Investigator Award and a National Science Foundation Faculty Award for Women. In 2010, she won both the Columbia Great Teacher Award—an honor bestowed by the students—and the Anita Borg Woman of Vision Award for Innovation.

JOSEPH L. MUNDY is president and chief executive officer of Vision Systems, Inc. Dr. Mundy joined General Electric’s Research and Development Center (CRD) in 1963. His early projects at CRD include high-power microwave tube design, superconductive computer memory devices, the design of high density integrated circuit associative memory arrays, and the application of transform coding to image data compression. He is the co-inventor of varactor bootstrapping, a key technique still widely used today in the design of CMOS integrated circuits. From 1972 until 2002, Dr. Mundy led a group involved in the research and development of image understanding and computer vision systems. In the early 1970s his group developed one of the first major applications of computer vision to industrial inspection. A system was developed to inspect incandescent lamp filaments at the rate of 15 parts/second and achieved classification performance of less than one error per thousand. The system operated in production for many years. His more recent research themes at CRD included industrial photogrammetry for machine control, theory of geometric invariance, change detection in satellite imagery, and CT classification of lung cancer lesions. In 1988 Dr. Mundy was named a Coolidge Fellow, GE’s highest technical honor. He applied the fellowship to a sabbatical at Oxford University, working with Sir Michael Brady and Professor Andrew Zisserman on applications of invariant theory to computer vision. This work led to the Marr Prize award in 1993. In 2002 Dr. Mundy joined the School of Engineering at Brown University as professor engineering (research). His research at Brown, under sponsorship of DARPA and NGA, includes video and image analysis, with emphasis on change detection and 3D volumetric modeling. In 2011 Dr. Mundy co-founded Vision Systems, Inc., and is president and chief executive officer. At VSI, Dr. Mundy has managed the DARPA Tailwind and Visual Media Reasoning projects that are aimed at aerial video processing and scene analysis. Dr. Mundy also provides general project management of current VSI efforts in 3D modeling from satellite imagery, geo-location of ground-level imagery, and facial recognition. Dr. Mundy received his B.E.E. (1963), M.Eng. (1966), and Ph.D. (1969) from Rensselaer Polytechnic Institute. He has published over 100 papers and articles in computer vision and solid-state electronics.

Next: Appendix B: Workshop Agenda »
Challenges in Machine Generation of Analytic Products from Multi-Source Data: Proceedings of a Workshop Get This Book
× 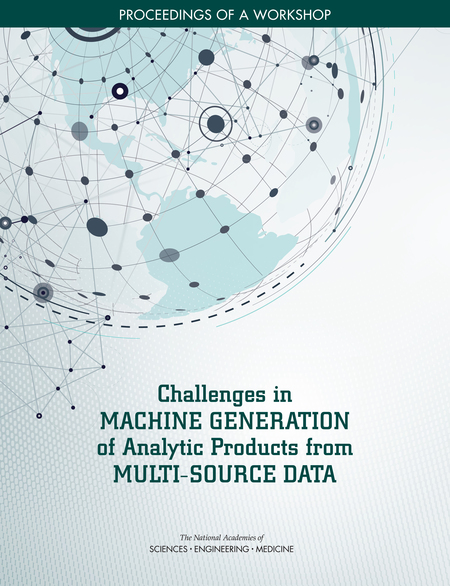 The Intelligence Community Studies Board of the National Academies of Sciences, Engineering, and Medicine convened a workshop on August 9-10, 2017 to examine challenges in machine generation of analytic products from multi-source data. Workshop speakers and participants discussed research challenges related to machine-based methods for generating analytic products and for automating the evaluation of these products, with special attention to learning from small data, using multi-source data, adversarial learning, and understanding the human-machine relationship. This publication summarizes the presentations and discussions from the workshop.