Get This Book
Visit NAP.edu/10766 to get more information about this book, to buy it in print, or to download it as a free PDF.
Page i Share Cite
Suggested Citation:"Front Matter." National Academies of Sciences, Engineering, and Medicine. 2018. Modernizing Crime Statistics: Report 2: New Systems for Measuring Crime. Washington, DC: The National Academies Press. doi: 10.17226/25035.
×

A Consensus Study Report of

The project that is the subject of this report was supported by the Bureau of Justice Statistics, Office of Justice Programs, and the Federal Bureau of Investigation, via a grant from the National Science Foundation (No. SES-1024012) that permits a consortium of federal agencies to support the work of the Committee on National Statistics. Any opinions, findings, conclusions, or recommendations expressed in this publication do not necessarily reflect the views of the organizations or agencies that provided support for the project.

Copyright 2018 by the National Academy of Sciences. All rights reserved.

For information about other products and activities of the National Academies, please visit nationalacademies.org/whatwedo.

ROBERT M. GOERGE, Chapin Hall at the University of Chicago

JAMES P. LYNCH, Department of Criminology and Criminal Justice, University of Maryland (Consultant to the panel)

PAUL K. WORMELI, Wormeli Consulting, LLC, Ashburn, Virginia (Consultant to the panel and liaison from Committee on Law and Justice)

* Served as member of the panel from formation through December 8, 2014.

† Served as chair of the panel from formation through December 8, 2014, following appointment as executive director of the Justice Research and Statistics Association.

ROBERT M. GROVES (Chair), Office of the Provost, Department of Mathematics and Statistics, and Department of Sociology, Georgetown University

COMMITTEE ON LAW AND JUSTICE 2018

KAREN MATHIS, Institute for the Advancement of the American Legal System, University of Denver

SUSAN B. SORENSON, School of Social Policy and Practice, University of Pennsylvania

THE PANEL ON MODERNIZING THE NATION’S CRIME STATISTICS is pleased to submit this second and final report on modernizing the collection of data on crime in the United States. Of necessity, because most of the data gathering for this final report took place during preparation of our first report, these acknowledgments are virtually identical to those in Report 1. We trust that it will be understood that the repetition is not meant to diminish our appreciation of the time and talent of all those who have contributed to the panel’s work.

Both of our sponsoring agencies—the Bureau of Justice Statistics (BJS) and the Criminal Justice Information Services (CJIS) Division of the Federal Bureau of Investigation (FBI)—committed considerable resources and attention to our study, for which we are greatly appreciative. Former BJS director William Sabol, deputy director Gerard Ramker, and deputy and acting director Jeri Mulrow provided constant support; we owe much to senior statistical advisor Allen Beck for his discussions of his participation with the United Nations Office on Drugs and Crime (UNODC) expert work group on crime classification; and we thank the other BJS staff who gave unyieldingly of their time, including Howard Snyder, Michael Planty, and Erica Smith. At FBI/CJIS, Amy Blasher provided valuable assistance and liaison to our panel as Uniform Crime Reporting (UCR) Program manager, Crime Statistics Management unit chief, and UCR Modernization manager; Samuel Berhanu provided updates to the panel after succeeding Blasher as Crime Statistics Management unit chief. Michelle Klimt was instrumental in the creation of this project during her time as chief of the CJIS Law Enforcement Support Section, and John Derbas has continued to provide assistance. We have also benefited from extensive interaction with statisticians James Noonan and Cynthia Barnett-Ryan, from the engagement of Randall Thysse in our work, and from a discussion with executive assistant director for the Science and Technology Branch Amy Hess

during her tenure in that position. The U.S. Office of Management and Budget provided the essential encouragement for BJS and FBI to jointly sponsor this review; we are particularly grateful to Rochelle Martinez and the Statistical and Science Policy Office.

The production of a modern classification of crime, in Report 1, is arguably the major product and weightiest conceptual lift of this project. In the development of our proposed classification—from which stems the discussion in this second report—we remain greatly indebted to the work of a UNODC expert work group established to draft an International Classification of Crime for Statistical Purposes. Angela Me, chief of the UNODC’s Research and Trend Analysis Branch, traveled to speak to our panel in person at our second meeting, and Michael Jandl (research officer in the Statistics and Survey Division) graciously stepped in on short notice to give a brief overview of the UNODC work by teleconference at our first meeting. We note that the UNODC work group is continuing to work out the methodological and implementation issues of the kind we address in this report and look forward to continued cooperation, and have appreciated the opportunity to discuss the work at conferences on international crime, justice, and governance statistics.

With continued appreciation, we refer readers to Appendix B of Report 1—the detailed list of participant stakeholders from our panel’s data-gathering meetings. We again thank all the speakers and participants who enriched our discussions with their wide-ranging perspectives (and shared interest in high-quality crime and justice data), and look forward to continued collaboration in implementation stages.

At the National Academies of Sciences, Engineering, and Medicine, Michael Siri provided expert and always considerate assistance in managing the logistics of this very active study panel. For a little more than 6 critical months in 2015, the panel had the invaluable assistance of Seth Hauser, who took to a short-term assignment as senior program officer with gusto and deftly constructed the agenda for two of our panel meetings. Program officer Jordyn White assisted with our proceedings. Daniel Cork served as study director for this project and deserves special recognition. His skills for incorporating large amounts of technical and organizational data on crime statistics with insights from data users, providers, and panel members were inimitable and invaluable to the writing of this report.

This Consensus Study Report was reviewed in draft form by individuals chosen for their diverse perspectives and technical expertise. The purpose of this independent review is to provide candid and critical comments that will assist the National Academies of Sciences, Engineering, and Medicine in making each published report as sound as possible and to ensure that it meets the institutional standards for quality, objectivity, evidence, and responsiveness to the study charge. The review comments and draft manuscript remain confidential to protect the integrity of the deliberative process.

Although the reviewers listed above provided many constructive comments and suggestions, they were not asked to endorse the conclusions or recommendations of this report nor did they see the final draft before its release. The review of this report was overseen by Alfred Blumstein, H. John Heinz III College of Public Policy and Information Systems, Carnegie Mellon University, and Philip J. Cook, Sanford School of Public Policy, Duke University. They were responsible for making certain that an independent examination of this report was carried out in accordance with the standards of the National Academies and that all review comments were carefully considered. Responsibility for the final content rests entirely with the authoring committee and the National Academies.

1.1 The Panel and Its Charge

1.3 Limitations of This Study

1.4 Structure of This Report

2.2.2 Putting Crime in Context, Alternative Metrics for Crime, and the Harms Imposed by Crime

2.2.4 Using the Crime Classification as Blueprint

3.1.2 Who Should Coordinate and Govern, and How?

3.2.2 Examples of Federal-State Cooperative Programs in the Statistical System

A Charge to the Panel

B Historical Themes in the Development of U.S. National Crime Statistics

B.1 Early Days: Crime Statistics as Tool for Discovery

B.2 Push for More Detail, Almost From the Start

B.4 Ossification of Concepts, Divergence of Crime Statistics from Their Use, and the 1958 Program Review

B.5 Emergence of the National Crime Victimization Survey

B.6 The Blueprint and the Development of the National Incident-Based Reporting System

B.7 The Status Quo: “New” Crimes in “Old” Structures

B.8 National Crime Statistics Exchange, Sunsetting the Summary Counts, and the Path Ahead

D.4 Businesses and Organizations as Actors in Crime Statistics

2.1 Sequence of events in the criminal justice system.

3.1 Principles and Practices for a Federal Statistical Agency

3.2 Current Legal and Regulatory Mandates for the Collection of National Crime Statistics

B.2 Recommendations of the Uniform Crime Reporting Study Task Force, 1984

B.3 “Benefits of Participation” in the National Incident-Based Reporting System, 1992 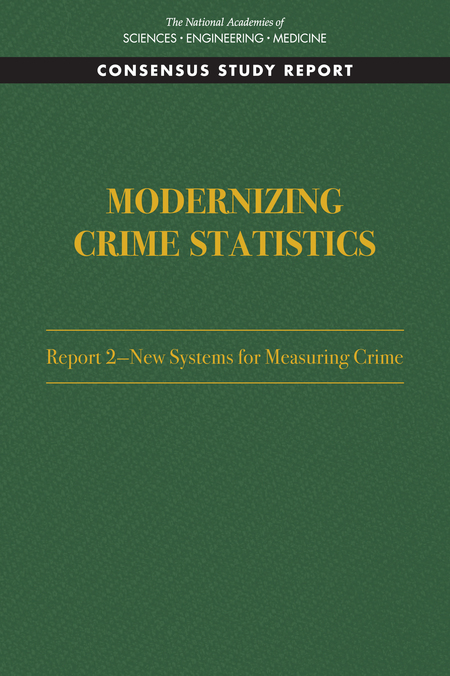 To derive statistics about crime – to estimate its levels and trends, assess its costs to and impacts on society, and inform law enforcement approaches to prevent it - a conceptual framework for defining and thinking about crime is virtually a prerequisite. Developing and maintaining such a framework is no easy task, because the mechanics of crime are ever evolving and shifting: tied to shifts and development in technology, society, and legislation.

Interest in understanding crime surged in the 1920s, which proved to be a pivotal decade for the collection of nationwide crime statistics. Now established as a permanent agency, the Census Bureau commissioned the drafting of a manual for preparing crime statistics—intended for use by the police, corrections departments, and courts alike. The new manual sought to solve a perennial problem by suggesting a standard taxonomy of crime. Shortly after the Census Bureau issued its manual, the International Association of Chiefs of Police in convention adopted a resolution to create a Committee on Uniform Crime Records —to begin the process of describing what a national system of data on crimes known to the police might look like.

Report 1 performed a comprehensive reassessment of what is meant by crime in U.S. crime statistics and recommends a new classification of crime to organize measurement efforts. This second report examines methodological and implementation issues and presents a conceptual blueprint for modernizing crime statistics.