Visit NAP.edu/10766 to get more information about this book, to buy it in print, or to download it as a free PDF.
Page i Share
Suggested Citation:"Front Matter." National Academies of Sciences, Engineering, and Medicine. 2018. Admissibility and Public Availability of Transit Safety Planning Records. Washington, DC: The National Academies Press. doi: 10.17226/25144.
×

Transportation Research Board Special Report 326 Subscriber Categories Public Transportation (PT), Law (LAW), Safety and Human Factors (SHF) Transportation Research Board publications are available by ordering individual publications directly from the TRB Business Office, through the Internet at www. TRB.org or nationalacademies.org/trb, or by annual subscription through organi- zational or individual affiliation with TRB. Affiliates and library subscribers are eligible for substantial discounts. For further information, contact the Transporta- tion Research Board Business Office, 500 Fifth Street, NW, Washington, DC 20001 (telephone 202-334-3213; fax 202-334-2519; or e-mail TRBsales@nas.edu). Copyright 2018 by the National Academy of Sciences. All rights reserved. Printed in the United States of America This publication was reviewed by a group other than the authors according to the procedures approved by a Report Review Committee consisting of members of the National Academy of Sciences, the National Academy of Engineering, and the National Academy of Medicine. This study was sponsored by the Federal Transit Administration and by the U.S. Department of Transportation. International Standard Book Number-13: 978-0-309-47755-0 International Standard Book Number-10: 0-309-47755-7 Digital Object Identifier: https://doi.org/10.17226/25144 Library of Congress Control Number: 2018946496

ix Preface Section 3021 of the Fixing Americaâs Surface Transportation Act of 2015 calls on the Secretary of Transportation to contract with the Transportation Research Board (TRB) to convene a committee of experts to evaluate whether it is in the public interest, including public safety and the legal rights of persons injured in public transportation accidents, to withhold from discovery or admission into evidence in a Federal or State court proceeding any plan, report, data, or other information or portion thereof, submitted to, developed, produced, collected, or obtained by the Secretary of Transportation or the Secretaryâs representative for purposes of complying with the requirements under section 5329 of title 49, United States Code, including information related to a recipientâs safety plan, safety risks, and mitigation measures. The U.S. Department of Transportation (USDOT) contracted with the National Academies of Sciences, Engineering, and Medicine (the National Academies) to conduct the study. The study charge is presented in full and discussed in detail in Chapter 1. To conduct the study, the National Academies convened a seven- member committee of experts in law, public policy (including public ben- efits of transparency and disclosure), transit operations, and safety, led by Michael S. Townes, currently retired. The content and findings of the report represent the consensus effort of the members, who served uncompensated in the public interest. Committee members convened four times from April 2017 to December 2017. Data-gathering sessions included briefings by the

x PREFACE Federal Transit Administration (FTA), transit agencies, congressional staff, transit union representatives, and lawyers engaged in relevant work. ACKNOWLEDGMENTS The committee thanks the many individuals and organizations who con- tributed to its work. The USDOT liaison for the study was Roy Chen of FTA. Chen pro- vided contract oversight. Kim Burtch, Michael Coplen, Candace Key, Aloha Ley, and Lynn Spencer of FTA also provided briefings to the committee. Congressional staff briefing the committee included Homer Carlisle and Jen Deci of the Senate Banking Committee and Caryn Lund and Auke Mahar-Piersma of the House Transportation and Infrastructure Committee. Transportation industry representatives briefing the committee included Linda Ford of the American Public Transportation Association, Jennifer Mayo and Hannah Needleman of the Federal Highway Administration, John Milton of the Washington State Department of Transportation (who later joined the committee as a member after another member stepped down), and Jordan Multer of the USDOT Volpe National Transportation Systems Center. Transit agency representatives included Dave Goeres of the Utah Transit Authority, Rita Roberts-Turner of the Nashville Metropolitan Transit Authority, Karen Seimetz of the Chicago Transit Authority, and Gregory Skillman of TriMet (Portland). Members of the legal profession briefing the committee included Paul Rheingold of Rheingold Giuffra Ruffo & Plotkin LLP; Lawrence Simon of Javerbaum Wurgaft Hicks Kahn Wikstrom & Sinins, PC; and Kirk Van Tine of Baker Botts LLP. The committee invited other individuals to make presentations on mat- ters relevant to the study: Sawyer Baker of the Washington Metropolitan Area Transportation Authorityâs Ridersâ Advisory Council for a public perspective and Keira McNett of the Amalgamated Transit Union for a labor union perspective. Katherine Kortum and Thomas R. Menzies, Jr., were the principal project staff. Kortum managed the study and drafted the report under the guidance of the committee and the supervision of Menzies, acting director, Consensus and Advisory Studies, TRB. Stephen Godwin provided con- ceptual and drafting support. Amelia Mathis provided extensive support to the committee in arranging its meetings and in managing documents. Kathi Grasso of the Committee on Law and Justice and Steven Kendall of the Committee on Science, Technology, and Law provided input and assistance with regard to the reportâs content and findings. The committee acknowledges Norman Solomon, who edited the report.

PREFACE xi This report was reviewed in draft form by individuals chosen for their diverse perspectives and technical expertise. The purpose of this indepen- dent review is to provide candid and critical comments that will assist the National Academies in making each published report as sound as possible and to ensure that it meets the institutional standards for quality, objectiv- ity, evidence, and responsiveness to the study charge. The review comments and draft manuscript remain confidential to protect the integrity of the de- liberative process. The committee thanks the following individuals for their review of this report: Richard Bacigalupo, Cardinal Infrastructure, LLC, Orange, California; Sara Rollet Gosman, University of Arkansas School of Law, Fayetteville; Jordan Multer, USDOT Volpe National Transportation Systems Center, Cambridge, Massachusetts; Robert Peck, Center for Con- stitutional Litigation, New York City, New York; Bruce Smith, Apperson Crump PLC, Memphis, Tennessee; and Mike Tardif, Freimund Jackson & Tardif PLLC, Olympia, Washington. Although the reviewers listed above provided many constructive com- ments and suggestions, they were not asked to endorse the conclusions or recommendations of this report, nor did they see the final draft before its release. The review of this report was overseen by Ellen Clayton, co- chair of the National Academiesâ Report Review Committee, and National Academy of Sciences member Susan Hanson, Clark University (emerita), Worcester, Massachusetts. They were responsible for making certain that an independent examination of this report was carried out in accordance with the standards of the National Academies and that all review comments were carefully considered. Responsibility for the final content rests entirely with the authoring committee and the National Academies.

Next: Executive Summary »
Admissibility and Public Availability of Transit Safety Planning Records Get This Book
× 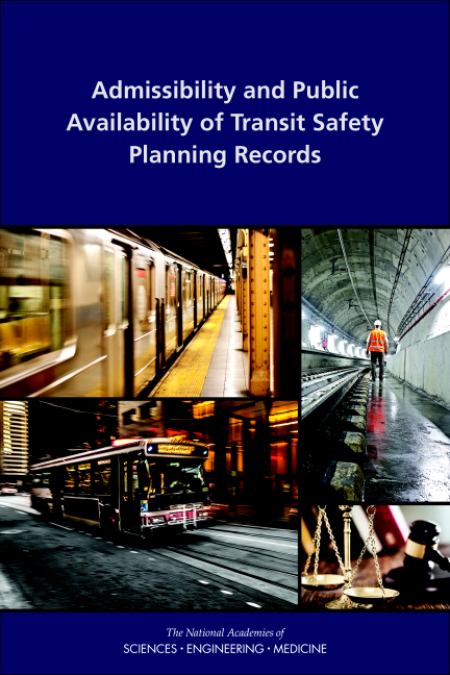 In 2012, Congress gave the U.S. Federal Transit Administration (FTA) the authority to establish a new comprehensive framework to oversee the safety of the country’s public transit systems. As part of that framework, state and local transit agencies are required to engage in safety planning. In the Fixing America’s Surface Transportation Act of 2015, Congress asked the National Academies of Sciences, Engineering, and Medicine to evaluate and provide recommendations on whether it is in the public interest for transit agencies to be allowed to withhold from civil litigation all records developed in compliance with this new federal safety planning requirement.

TRB Special Report 326: Admissibility and Public Availability of Transit Safety Planning Records considers the arguments favoring and opposing evidentiary protections for safety planning records and the rationale for Congressional decisions to grant such protections in other transportation modes. The report examines factors that Congress must consider when deciding where the public interest balance lies. They include a desire for transit agencies to engage in high-quality safety planning without fear of the planning records being used against them in court and the preservation of a tort system that deters unsafe conditions and allows injured parties to be justly compensated. Recommendations to Congress and FTA are offered with these and other important factors in mind.