Chapter:Appendix A Statement of Task

Get This Book
Visit NAP.edu/10766 to get more information about this book, to buy it in print, or to download it as a free PDF.
« Previous: 7 Conclusions and Findings
Page 127 Share Cite
Suggested Citation:"Appendix A Statement of Task." National Academies of Sciences, Engineering, and Medicine. 2018. An Assessment of U.S.-Based Electron-Ion Collider Science. Washington, DC: The National Academies Press. doi: 10.17226/25171.
×

The committee will assess the scientific justification for a U.S. domestic electron ion collider facility, taking into account current international plans and existing domestic facility infrastructure. In preparing its report, the committee will address the role that such a facility could play in the future of nuclear physics, considering the field broadly, but placing emphasis on its potential scientific impact on quantum chromodynamics.

In particular, the committee will address the following questions:

Next: Appendix B Committee and Staff Biographical Information »
An Assessment of U.S.-Based Electron-Ion Collider Science Get This Book
× 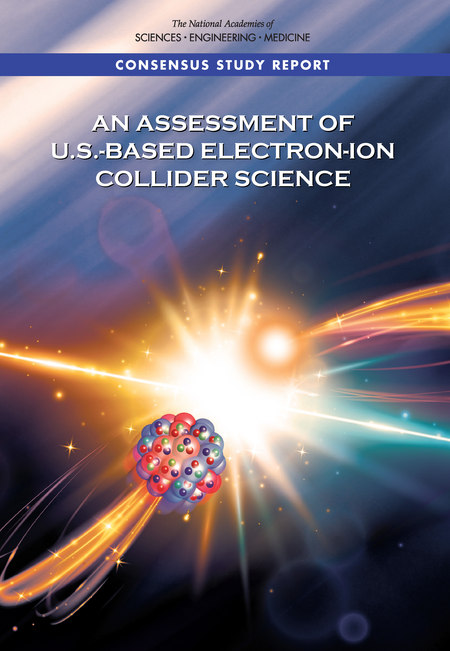 Understanding of protons and neutrons, or “nucleons”—the building blocks of atomic nuclei—has advanced dramatically, both theoretically and experimentally, in the past half century. A central goal of modern nuclear physics is to understand the structure of the proton and neutron directly from the dynamics of their quarks and gluons governed by the theory of their interactions, quantum chromodynamics (QCD), and how nuclear interactions between protons and neutrons emerge from these dynamics. With deeper understanding of the quark-gluon structure of matter, scientists are poised to reach a deeper picture of these building blocks, and atomic nuclei themselves, as collective many-body systems with new emergent behavior.

The development of a U.S. domestic electron-ion collider (EIC) facility has the potential to answer questions that are central to completing an understanding of atoms and integral to the agenda of nuclear physics today. This study assesses the merits and significance of the science that could be addressed by an EIC, and its importance to nuclear physics in particular and to the physical sciences in general. It evaluates the significance of the science that would be enabled by the construction of an EIC, its benefits to U.S. leadership in nuclear physics, and the benefits to other fields of science of a U.S.-based EIC.