Chapter:Appendix B: Copyright Issues of Interest to NASA Investigators and Developers of Software

Get This Book
Visit NAP.edu/10766 to get more information about this book, to buy it in print, or to download it as a free PDF.
« Previous: Appendix A: Statement of Task
Page 80 Share Cite
Suggested Citation:"Appendix B: Copyright Issues of Interest to NASA Investigators and Developers of Software." National Academies of Sciences, Engineering, and Medicine. 2018. Open Source Software Policy Options for NASA Earth and Space Sciences. Washington, DC: The National Academies Press. doi: 10.17226/25217.
×

Copyright Issues of Interest to NASA Investigators and Developers of Software

Copyright law is complicated. NASA investigators and software developers would benefit from having some basic awareness of and training in how copyright applies to them.1 This appendix is not a comprehensive overview of the law, but instead presents some of the key aspects not already covered in Section 2.4. As experience levels in this realm vary, the information is presented in question-and-answer format.

What is copyright and how it is it obtained?

Copyright law grants creators a bundle of exclusive rights that allow the owner of a creative work to prohibit others from copying, distributing, performing, adapting, or otherwise using the work in violation of those exclusive rights. Copyright comes into existence the moment an original work is created. Registration of a copyright is not necessary, and there is no need to include a copyright notice on a work. Creators automatically own an “all rights reserved” copyright at that moment whether they want it or not.

What is the purpose of copyright?

There are two primary rationales offered for copyright. One view is that copyright is designed to provide an incentive to create new works. In many cases, individuals will not invest in the creation of new works without knowing that the work can be exploited by them only for a period of time. Another view, more dominant outside the United States although it is offered by some scholars in the United States, is that copyright ensures attribution for authors and preserves the integrity of creative works.

How is copyright enforced?

The owner of a copyrighted work can bring a lawsuit against any person that violates one of the exclusive rights that copyright grants them. Unauthorized use constitutes infringement and gives the holder of the copyright the right to recover damages. If the work has been registered with the U.S. Copyright Office, the owner is entitled to either actual damages and profits or statutory damages, injunctive relief, and attorney’s fees, among

other remedies. Damages can be extremely high depending on the number of infringing copies made, if statutory damages are sought in lieu of actual damages, and if the infringement is willful or innocent.

What is fair use and does it protect scientists and researchers?

Copyright law has built-in limitations designed to ensure that the rights of the public are not unduly burdened by copyright. One of those limitations in the United States is fair use. Fair use is designed to promote the creation and sharing of knowledge. It is a defense to a claim of infringement, allowing the public to do certain things with a copyrightable work without infringing the rights of the owner. Fair uses can include using a work in commentary, research, and scholarship. Fair use is a highly factual analysis—there are no fixed and certain categories of uses on which a user can always depend. Courts look at the particular facts before making the determination. For example, not every use of another person’s copyrightable content in a research paper is a fair use.

Fair use applies to a particular user and his or her use of the work; it does not automatically apply to reuse of the work by subsequent users. For example, if a scientist includes a colleague’s copyrightable chart in slides presented at an educational conference, the scientist’s use may be a fair use. But if the slides are then posted on the Internet and downloaded and sold by a researcher, the researcher cannot depend on the fair use made by the scientist for that particular use and may be liable for infringement.

What is the public domain?

Copyright terms vary by country. While the general term of copyright in the United States for works created by individuals lasts for the life of the creator plus 70 years, in much of the world the term is life plus 50 years, and in a few countries life plus 100 years. Because copyright terms differ, a work in the public domain in the United States may be not be in the public domain everywhere.

What is the role of standardized licenses in advancing research and science, including software development?

Standard licenses and the routine release of copyright interest to software contributions are critical to the success of community-developed software, often including scientific software. If these are not organized in advance, it can be essentially impossible to unencumber the work later. In some cases, institutional intellectual property offices are focused on exploiting work for profit, and they are slow to agree to the open sharing on which science depends.

What related career risks are there?

Most scientists work for employers who administer funds (such as NASA grants) to them. The work-for-hire clause puts the ownership of essentially all their creative work into the employer’s hands, not the scientist’s. If a scientist moves to another organization, the original organization has the right to take full possession of everything the employee created, and even to give it to another employee for further exploitation, or to sell it. The sponsor (e.g., NASA) has limited rights in such cases. In some organizations, employees have negotiated the right to keep ownership, or to have it transferred to follow them wherever they go, but this is not universal. It is important for all scientists to know the ownership status of their work, and it is in their best interest to negotiate favorable terms upon hire. Some NASA-funded scientists have lost access to their life’s work because they left an employer who retained ownership of the work. 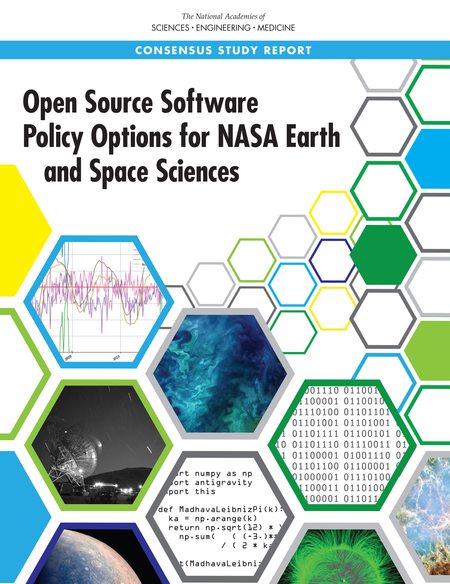 Modern science is ever more driven by computations and simulations. In particular, the state of the art in space and Earth science often arises from complex simulations of climate, space weather, and astronomical phenomena. At the same time, scientific work requires data processing, presentation, and analysis through broadly available proprietary and community software.1 Implicitly or explicitly, software is central to science. Scientific discovery, understanding, validation, and interpretation are all enhanced by access to the source code of the software used by scientists.

This report investigates and recommends options for NASA’s Science Mission Directorate (SMD) as it considers how to establish a policy regarding open source software to complement its existing policy on open data. In particular, the report reviews existing data and software policies and the lessons learned from the implementation of those policies, summarizes community perspectives, and presents policy options and recommendations for implementing an open source software policy for NASA SMD.