An Assessment of the Center for Neutron Research at the National Institute of Standards and Technology: Fiscal Year 2018 (2018)

Get This Book
Visit NAP.edu/10766 to get more information about this book, to buy it in print, or to download it as a free PDF.
« Previous: Front Matter
Page 1 Share Cite
Suggested Citation:"Summary." National Academies of Sciences, Engineering, and Medicine. 2018. An Assessment of the Center for Neutron Research at the National Institute of Standards and Technology: Fiscal Year 2018. Washington, DC: The National Academies Press. doi: 10.17226/25282.
×

The National Institute of Standards and Technology (NIST) Center for Neutron Research (NCNR), with an annual budget of $50 million and a total staff of 217, is one of seven NIST laboratories. In 2017, NCNR served 2,769 users at the facility. It is an efficiently run neutron-scattering facility delivering 228 days of operation in 2017 with 98 percent reliability. It has a robust safety program with no regulatory violations since the last panel assessment in 2015.1 Its reactor’s hydrogen cold source is scheduled for replacement with one based on deuterium in 2022, an operation that will require an 8- to 12-month shutdown, during which time several existing beam lines will be equipped with more efficient supermirror guides. The commissioning of the Very Small Angle Neutron Scattering (vSANS) instrument is substantially complete, with the polarization capability still in progress at the time of this writing; vSANS will significantly improve the capabilities that the NCNR can offer the soft-matter community. The Chromatic Analysis Neutron Diffractometer or Reflector (CANDOR), which is scheduled to come on line in 2019, will enable new experiments to probe shorter timescales and improved polarized neutron measurements. The NeXT (Neutron and X-Ray Tomography) system, which began operation in 2016, cements NCNR’s continuing world leadership in neutron imaging. The Stress Diffractometer, which provides a platform for the noninvasive study of inhomogeneous stress and strain, is undergoing a series of upgrades that will increase its data acquisition rate by a factor of 20 and increase its value to its industrial users. The NCNR has an aggressive program to upgrade software and to make it more user friendly and deployable across platforms. The NCNR and its users conduct world-class and highly cited research in soft matter, hard matter (particularly magnetic materials), biology, and chemical and engineering physics. It runs the Center for High Resolution Neutron Scattering (CHRNS), an important partnership, the funding for which must be renewed in 2020 with the National Science Foundation. Because of its investment in beamline and special-environment staff and equipment, this partnership is critical to the NCNR’s ability to offer an effective user program. The NCNR established in 2012 a unique and creative consortium, called nSoft, that is designed specifically to engage industry in neutron scattering, and it runs cooperative agreements with four universities that provide funds to support technical staff, postdoctoral researchers, and graduate students. It also has a robust education and outreach program that features a very popular neutron scattering summer school run through CHNRS.

The Panel on Review of the Center for Neutron Research at the National Institute of Standards and Technology determined that the following issues merit attention. More detailed explanations of them appear in the final chapter of this report.

The reactor is 50 years old. Loss of this facility would have a strongly negative impact on neutron science within the United States and the scientific disciplines that NCNR serves.

RECOMMENDATION: The NCNR should commission a detailed assessment of the current facility and begin the conceptual design of a new reactor. NCNR would do well to elaborate a systematic succession plan in concert with NIST leadership.

External reviews conducted less frequently than annually are not able to provide sufficiently current or detailed evaluations of the NCNR or to track its technical and operational issues.

RECOMMENDATION: The NCNR should establish external reviews that assess its technical and operational issues on an annual basis.

The NCNR plays a critical role in both fundamental and applied industrial research within the United States but does not currently have representation on the NIST Visiting Committee on Advanced Technology.

RECOMMENDATION: The NCNR leadership should work with NIST leadership to address the absence of VCAT representation in neutron applications.

The panel was not provided with a document that clearly articulates the NCNR’s vision, mission, and strategic plan complete with contingencies.

RECOMMENDATION: The NCNR should prepare a guiding document on vision, mission, and strategic plans and update it regularly.

The United States significantly lags the European Union in neutron scattering facilities, and it is in jeopardy of becoming internationally noncompetitive. NCNR represents a large fraction of the neutron scattering capability within the United States, and it remains a world-class facility, even though its funding has been stagnant in recent years. Continuation of current funding trends will inevitably lead to a trajectory of decline.

The Neutron Physics group has a long history of studying the fundamental properties of the neutron. It is currently running experiments to measure the lifetime of the neutron, which is an important parameter in models of how atomic nuclei were formed in the Big Bang, and the magnetic moment of the neutron; test the so-called Standard Model of elementary particle physics; search for new mechanisms that might help explain the matter-antimatter asymmetry in the universe; and search for a possible elementary particle called the sterile neutrino, which responds only to gravitational forces. These are important measurements that require great care and often take a long time to complete.

RECOMMENDATION: NCNR leadership should work with NIST leadership to ensure the support of the NCNR at a level of resourcing that will enable it to develop and support world-class neutron scattering instrumentation.

The nSoft consortium is developing a more facile engagement with industry.

RECOMMENDATION: The NCNR should establish quality and success metrics for nSoft.

RECOMMENDATION: The NCNR should develop an additional umbrella organization for hard matter and industrial interactions.

While this report was being prepared, a study prepared by the Panel on Public Affairs (POPA) of the American Physical Society, Neutrons for the Nation,2 was released. Its findings are consistent with those presented here, although its focus includes, unlike this document, the transition from highly enriched uranium (HEU) to low enriched uranium (LEU) that is scheduled to take place in U.S. nuclear facilities on a 10-year-plus time scale.

2 American Physical Society, 2018, Neutrons for the Nation: Discovery and Applications while Minimizing the Risk of Nuclear Proliferation, https://www.aps.org/policy/reports/popa-reports/heu.cfm.

Next: 1 Introduction »
An Assessment of the Center for Neutron Research at the National Institute of Standards and Technology: Fiscal Year 2018 Get This Book
× 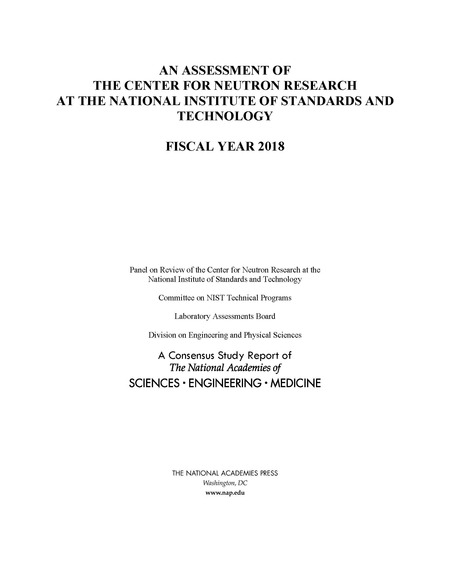 At the request of the National Institute of Standards and Technology (NIST), the National Academies of Sciences, Engineering, and Medicine has, since 1959 annually assembled panels of experts from academia, industry, medicine, and other scientific and engineering environments to assess the quality and effectiveness of the NIST measurements and standards laboratories, of which there are now seven, as well as the adequacy of the laboratories’ resources. This report assesses the scientific and technical work performed by the National Institute of Standards and Technology (NIST) Center for Neutron Research in the fiscal year 2018. It reviews the organization's technical programs; the portfolio of scientific expertise within the organization; the adequacy of the organization's facilities, equipment, and human resources; and the effectiveness with which the organization disseminates its program outputs.