A decision made by the National Defense Research Committee (NDRC) in 1940 to turn to selected universities for the management of weapons research brought American universities for the first time into large-scale weapons research. Instead of turning to government laboratories or to industry for many major war research projects, NDRC made the revolutionary decision, the first in the nation’s history, to ask universities to undertake both large and small war projects.

Their collective commitment to this effort, and their great success in carrying through war research and development under tight security, ushered in a new period in the relationship of the federal government to higher education. The Office of Scientific Research and Development (OSRD) entered into over 800 research contracts with nonprofit institutions, mainly universities. The total expended by OSRD in the conduct of these contracts was in excess of $330,000,000. Included in this program were projects which turned into major laboratories, such as the Applied Physics Laboratory at Johns Hopkins University (which was devoted to the development of proximity fuses), the center for rocket research at the California Institute of Technology, the atomic weapons development laboratory at Los Alamos managed by the University of California, the Radiation Laboratory at M.I.T. concentrating on short-wave radar and long-range navigation, and the radar counter-measures laboratory at Harvard University.

Other impressive aspects of this wartime university partnership with government are presented in Scientists Against Time, the Pullitzer Prize-winning history of OSRD by James P.Baxter, III. It is noted there that 69 different academic institutions were represented on the staff of the Radiation Laboratory, and that California, Columbia, Harvard, and the Woods Hole Oceanographic Institution operated major laboratories for the study of underwater sound and underwater explosions. Smaller projects were carried on by other institutions without the establishment of special laboratories; as, for example, work on explosives at the University of Michigan, on optics at the University of Rochester, and other notable work at Stanford University, Duke University, Rensselaer Polytechnic Institute, and the state universities of New Mexico, Texas, Iowa, Florida, and Ohio. At Massachusetts Institute of Technology, major contributions were made in

the instrumentation and servo laboratories to the control of gunfire, which proved to be of decisive importance in protecting against airplane attacks on ship and land forces.

Baxter notes that the college and university at war had their dormitories and classrooms filled with Army and Navy trainees, along with reduced civilian student bodies; but, at the same time, they conducted war research of a secret character. Thus, these institutions managed the complexities of a first-rate security system, which at times involved armed guards and painstaking indoctrination. The security record of these academic institutions was admirable, proving that “intelligent and patriotic civilians, carefully indoctrinated as to the importance of security, can maintain secrecy as effectively as members of the armed services.” The development of the atomic bomb and other weapons under tight security “was achieved,” wrote Baxter, “not by the regimentation of science or industry but by the country where greatest pains had been taken to leave both free to make the most of the creative powers. Secrecy was maintanined without a Gestapo.”

Most of the secret war research projects on campus and in big laboratories, such as the Radiation Laboratory, were brought to a rapid conclusion at the end of the war, particularly those that were secret and therefore inappropriate to the policies and freedom of academic institutions. A few major classified projects were continued after the war under university management but were conducted off campus. For example, the Applied Physics Laboratory has continued under the management of Johns Hopkins University, and, of course, the Los Alamos Laboratory has remained under the direction of the University of California, which also operates a second major classified research laboratory at Livermore. In the postwar period, a few new secret, large research projects, such as Lincoln Laboratories at M.I.T., were established by the universities, but they were mainly off campus. The scientists who worked on secret projects during the war sought with all deliberate speed to return to university environments where they and their graduate students could work in complete freedom, and practically all universities banned secret work from their campuses.

The achievements of university research during the war led the Department of Defense to fund on-campus basic research generously in the postwar period. The Office of Naval Research (ONR) moved quickly to aid universities to reestablish their graduate programs in science and technology, thereby setting a pattern of benign sponsorship that recognized those special characteristics of universities which emphasized the essential values of academic freedom and the admission (and freedom of choice) of qualified students, including foreign nationals. ONR established contracting principles and procedures that paved the way for the National Science Foundation and that were generally adopted by all parts of the Department of Defense and by other defense-related government agencies, such as the Atomic Energy Commission and its successor.

Thus, the DOD played a major part in underwriting U.S. world leadership in unclassified science and technology. There was clear recognition that this achievement was an essential contribution to

national security and that the participating universities played a central role by adhering firmly to the “four freedoms” of university life. By seeking to avoid unnecessary intrusions, regulations, and secrecy requirements, the national security agencies freed the universities to work in a manner that enabled them to be most productive and creative. 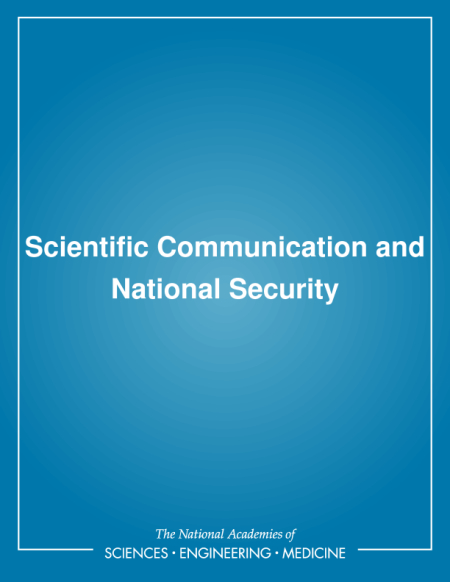 The military, political, and economic preeminence of the United States during the post-World War II era is based to a substantial degree on its superior rate of achievement in science and technology, as well as on its capacity to translate these achievements into products and processes that contribute to economic prosperity and the national defense. The success of the U.S. scientific enterprise has been facilitated by many factors, important among them the opportunity for American scientists and engineers to pursue their research-and to communicate with each other—in a free and open environment.

During the last two administrations, however, concern has arisen that the characteristically open U.S. scientific community has served as one of the channels through which critical information and know-how are flowing to the Soviet Union and to other potential adversary countries; openness in science is thus perceived to present short-term national security risks in addition to its longer-term national security benefits in improved U.S. military technology.

The Panel on Scientific Communication and National Security was asked to examine the various aspects of the application of controls to scientific communication and to suggest how to balance competing national objectives so as to best serve the general welfare. The Panel held three two-day meetings in Washington at which it was briefed by representatives of the departments of Defense, State, and Commerce, and by representatives of the intelligence community, including the Central Intelligence Agency, the Federal Bureau of Investigation, the Defense Intelligence Agency, and the National Security Agency. The Panel also heard presentations by members of the research community and by university representatives. In addition to these briefings, the Rand Corporation prepared an independent analysis of the transfer of sensitive technology from the United States to the Soviet Union. To determine the views of scientists and administrators at major research universities, the Panel asked a group of faculty members and administrative officials at Cornell University to prepare a paper incorporating their own views and those of counterparts at other universities.

The main thrust of the Panel's findings is completely reflected in this document. However, the Panel has also produced a classified version of the subpanel report based on the secret intelligence information it was given; this statement is available at the Academy to those with the appropriate security clearance.