Get This Book
Visit NAP.edu/10766 to get more information about this book, to buy it in print, or to download it as a free PDF.
« Previous: 5 Is the Red Wolf a Valid Taxonomic Species?
Page 73 Share Cite
Suggested Citation:"Glossary." National Academies of Sciences, Engineering, and Medicine. 2019. Evaluating the Taxonomic Status of the Mexican Gray Wolf and the Red Wolf. Washington, DC: The National Academies Press. doi: 10.17226/25351.
×

Adaptations: phenotypes or genotypes that enhance the survival and reproductive success of individuals.

Admixture: the formation of novel genetic combinations through the hybridization of genetically distinct groups.

Admixed population: a population that contains genes from at least two distantly related population or species as a result of interbreeding between populations or species that have been reproductively isolated and genetically differentiated.

Allele: alternative form of a gene.

Ancestral characteristic: a trait found in both the organism being studied and the common ancestor of a group to which the study organism belongs.

Ancestry painting of chromosomes: color coding different regions of chromosomes so that each ‘paint’ color reflects from which of the pre-defined reference species each region of chromosome originated.

Anthropogenic: resulting from the influence of human activities.

Attribute: a measurable characteristic of the ecological entity.

members of the autosome pairs are identical in size and contain a full complement of the same genes.

Base pair: a pair of complementary bases in a double-stranded DNA consisting of a purine in one strand linked by hydrogen bonds to a pyrimidine in the other. Cytosine (C) always pairs with guanine (G), and adenine (A) with thymine (T).

Cerebellum: the part of the brain at the back of the skull in vertebrates. Its function is to coordinate and regulate muscular activity.

Coalescence: the merging of genetic lineages backwards in time to a most recent common ancestor.

Derived: a trait found in an organism that was not present in the common ancestor of a group of organisms being studied.

Diploid: containing two complete haploid sets of chromosomes, one from each parent.

Ecosystem: a dynamic biological system consisting of all of the organisms in a specific environment and the non-living features of the environment with which they interact.

Endemic: found only in a particular geographic location, such as an island, country, or other defined area; organisms that are native to a place are not endemic to it if they are also found elsewhere.

Extirpation: the loss of a species or subspecies from a particular area, but not from its entire range.

Fitness: the ability of an individual or genotype to survive and produce viable offspring. Fitness is quantified as the number or relative proportion of offspring contributed to the next generation.

Gene: a segment of DNA whose nucleotide sequence codes for protein or RNA, or regulates other genes.

Gene flow: the movement of genetic material from one population into another population.

Gene tree: a phylogenetic tree based upon any single gene. A gene tree can be, but is not always concordant with, a species tree.

Genetic drift: random changes in allele frequencies in a population between generations due to sampling individuals that become parents and binomial sampling of alleles during meiosis. Genetic drift is more pronounced in small populations.

Genetic incompatibilities: the situation in hybrids where genes or chromosomes originating in different genetically divergent parental populations or species do not function well together in combination.

Genome: the complete sequence of DNA in an organism.

Haploid: having a single set of unpaired chromosomes.

Haplotype: a unique mtDNA sequence. An mtDNA haplotype is equivalent to an allele at a nuclear locus.

Heterozygosity: a measure of genetic variation that estimates the proportion of individuals in a population that are expected or observed to be heterozygous at a particular locus or over the entire genome.

Hybridization: mating of individuals from genetically distinct populations, or species, that results in offspring with mixed ancestry.

Hybrids: offspring produced by hybridization. Hybrids can be either first-generation (F1) hybrids or the offspring of hybrids themselves.

Inbreeding: mating between related individuals that results in an increase of homozygosity in the progeny because the individuals possess alleles that are identical by descent derived from the same common ancestor of both parents.

Inbreeding coefficient: the probability that an individual possesses two alleles at a locus that are identical by descent from a common ancestor from both of the individual’s parents.

Intergradation: area of connection between distinct subspecies where populations are found that have the characteristics of both.

Introgression: movement of alleles from one population or species into another through hybridization and repeated backcrossing (the reproduction of hybrids with individuals of the parental species).

Keystone species: a species that has a disproportionately large effect on its environment relative to its abundance.

Locus (plural loci): the position (or location) of a gene or other marker on a chromosome.

Meiosis: the cellular division process that is involved in sexual reproduction in which gametes are produced having half the number of copies of each chromosome as the parents.

Miocene: the epoch of the Tertiary Period that occurred from 25 to 10 million years ago, when grazing mammals became widespread.

Molecular clock: a technique that estimates how long two lineages have been diverging from each other on the basis of how many DNA substitutions are present between them.

Mutation: a change in the DNA sequence in the transmission of genetic information from parent to progeny.

Natural selection: differential contribution of genotypes to the next generation due to differences in survival and reproduction.

Nuclear DNA: the DNA contained within the nucleus of each cell.

Paraphyletic: a group of organisms that share a common ancestor to the exclusion of all other entities but in which some members of the group are excluded.

Phenotype: the observable traits of an organism (e.g., appearance, physiological function, or behavior).

Phylogenetic tree: a diagram showing the evolutionary relationships of taxa.

Phylogeny: the evolutionary history of the relationships among species.

Pleistocene: the epoch that began about 2.6 million years ago and lasted until about 11,700 years ago. The most recent ice age occurred during this time, as glaciers covered huge parts of the planet Earth.

Pliocene: the most recent epoch of the Tertiary Period from 5.3 million to 2.6 million years ago. It is characterized by the appearance of distinctly modern animals and by the expansion of grasslands.

Polymorphism: The presence of two more more alleles at the same gene locus within a population.

Polyphyletic: a group of organisms that do not share a common ancestor.

Population: all of the individuals of a given species within a defined ecological area.

Population biology: the study of populations, including their natural history, size, migration, evolution, and extinction.

Post-mating isolation: reproductive isolation that acts after production of a hybrid through hybrid inviability or sterility.

Post-orbital constriction: a narrowing of the cranium (skull) just behind the eye sockets.

Pre-mating isolation: reproductive isolation that stops production of an F1 by preventing mating.

Reciprocal monophyly: a genetic lineage is reciprocally monophyletic when all members of the lineage share a more recent common ancestor with each other than with any other lineage on a phylogenetic tree.

Recombination (gene shuffling): the exchange of DNA between parental chromosomes during the formation of gametes (sperm and egg cells). The result of this exchange is the production of offspring with a combination of genes that differs from either parent.

Rostrum: snout of a wolf.

Single nucleotide polymorphism (SNP): a nucleotide site in a DNA sequence that is variable within a population and can be used as a marker to assess genetic variation within and among populations.

Sister group: a term denoting the closest relatives of a given taxa in a phylogenetic tree.

Species: a group of organisms with a high degree of physical and genetic similarity that naturally interbreed among themselves and can be differentiated from members of related groups of organisms.

Species tree: a tree that reflects the actual phylogenetic history of the species under consideration.

Stable hybrid zone: a hybrid zone that does not move over time resulting from a balance between dispersal of parental types and selection against hybrids.

Subspecies: a taxonomically defined subdivision within a species that is physically or genetically distinct and often geographically separated.

Substitution: the replacement in a species of one nucleotide by another.

Systematics: the branch of biology concerned with the study of the diversity of organisms.

Taxonomy: the branch of biology concerned with the classification of organisms.

Trait: a characteristic or condition.

Type specimen: the specimen that was originally used to name a species or subspecies or that was later designated as the basis for that name. A type specimen might be a dried plant, a preserved animal, or a fossil and is usually kept in a museum or herbarium.

Zygoma (plural zygomata): the bony arch of the cheek formed by connection of the zygomatic and temporal bones.

Next: Appendix A: Open Session Meeting Agendas »
Evaluating the Taxonomic Status of the Mexican Gray Wolf and the Red Wolf Get This Book
× 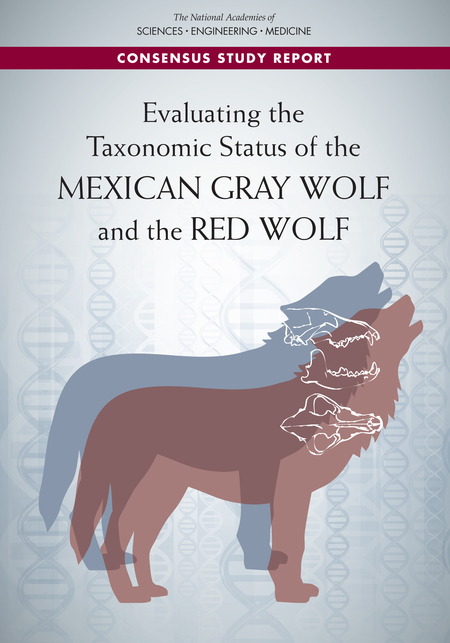 A species is not a fixed entity – the relationship among the members of the same species is only a snapshot of a moment in time. Different populations of the same species can be in different stages in the process of species formation or dissolution. In some cases hybridization and introgression can create enormous challenges in interpreting data on genetic distinctions between groups. Hybridization is far more common in the evolutionary history of many species than previously recognized. As a result, the precise taxonomic status of an organism may be highly debated. This is the current case with the Mexican gray wolf (Canis lupus baileyi) and the red wolf (Canis rufus), and this report assesses the taxonomic status for each.