Revisiting the Manufacturing USA Institutes: Proceedings of a Workshop (2019)

Chapter:5 Sustainability and the Future of the Institutes

Get This Book
Visit NAP.edu/10766 to get more information about this book, to buy it in print, or to download it as a free PDF.
« Previous: 4 Supporting Supply Chains and Small and Medium-sized Enterprises
Page 31 Share Cite
Suggested Citation:"5 Sustainability and the Future of the Institutes." National Academies of Sciences, Engineering, and Medicine. 2019. Revisiting the Manufacturing USA Institutes: Proceedings of a Workshop. Washington, DC: The National Academies Press. doi: 10.17226/25420.
×

Sustainability and the Future of the Institutes

In addition to the main workshop themes described in Chapters 2, 3, and 4, the question of the financial sustainability of the institutes was raised at a number of points over the course of the workshop.

Focusing on workforce development, Emily DeRocco of Lightweight Innovations for Tomorrow (LIFT) argued that the most critical component of the institutes’ sustainability strategy is in disseminating the narrative about the institutes putting individuals into the “right educational pathways” to jobs with sustainable wages while making sure that policy makers and funders at federal, state, and local levels hear this narrative. Nicolaus Rhenwrick of Lockheed Martin stated that it was critically important for his firm that the companies that make up its supply base, especially small and medium-sized manufacturers, are ready to meet Lockheed’s manufacturing needs. The education and workforce development component of the institutes is a key part of that assurance. The institutes help Lockheed fill a pipeline of future skilled workers, he said, and serve as certifying bodies that Lockheed relies on to send their employees to and to get them the right skill sets. Thus, Lockheed has expanded its tuition assistance to include certifications and online training. Dr. Hillberg of Siemens PLM Software added that scalability of the institutes’ workforce development programs is important in order to address the large number of unfilled skilled manufacturing positions. Ms. DeRocco pointed out that the institutes have not matured enough in the few years since their establishment to be able to bring to scale initiatives that are largely regionally driven; progress can be made in that area as long as scalability is part of a national strategic agenda for the institutes going forward.

A number of participants also focused on the long time frames needed to develop advanced technologies and the challenges this poses to the institutes. William Bonvillian of the Massachusetts Institute of Technology (MIT) suggested that the five-year window for federal support was “problematic on its face.” Addressing this subject in depth, Andrew Bowd of the American Institute for Manufacturing Integrated Photonics (AIM Photonics, or AIM) described the enormous time and financial scale associated with leading-edge technology in

building and ramping up a semiconductor fabrication plant. He said it takes at least 90 days for a silicon wafer to go through a fab, such as GLOBALFOUNDRIES’ plant in upstate New York; this is equivalent to one “learning cycle.” Twenty learning cycles, or about five years of R&D, is needed before new material is introduced and the next five-year research cycle is performed, at which point the R&D is considered to be finished—representing at least a decade and several billions of dollars’ worth of investment in a single fab.

But with technologies like micro-electro-mechanical systems (MEMS)—the gyroscopes found in smartphones—which require almost three decades’ worth of development, Mr. Bowd said that the five-year models for funding of the Manufacturing USA institutes are insufficient for developing advanced technologies. Much longer time horizons are needed. The institutes have a role in addressing this investment gap by bringing together the private actors (small, medium, and large companies and corporations) and the public sector, each with their own different time scales and motivations.

Mr. Bowd discussed how the path to continued success of the institutes lies in continued provision of base funding, appropriate to product life cycles, development costs, commercialization probabilities, and national security considerations. The institutes’ success, in turn, can be measured by the number of domestic high-tech firms that have been de-risked, the number of engineers and scientists educated, the number of products facilitated to commercialization, and the proliferation of technology via patents, workforce development, and collaboration among members. The bottom line is that the institutes help to ensure that the United States remains at the leading edge of manufacturing by serving as technology focal points, addressing market failures, and providing continued workforce education.

Ira Moskowitz of the Massachusetts Technology Collaborative (MassTech) said that the uncertainty of federal funding after the cut-off period was a stumbling block to engaging new members in the Manufacturing USA institutes. A permanent program is needed, not only to convince new members of the durability of the institutes but also to reassure institute staff and reassure state governments, whose long-term financial support is predicated on continued federal funding. The biggest distinction between the institutes and organizations like Fraunhofer in Germany and Taiwan’s Industrial Technology Research Institute (ITRI), he said, is the sense of permanence and connectivity around them that has been amplified after years of sustained presence and collaboration among their members.

Next: 6 Key Points Made by Presenters During the Workshop »
Revisiting the Manufacturing USA Institutes: Proceedings of a Workshop Get This Book
× 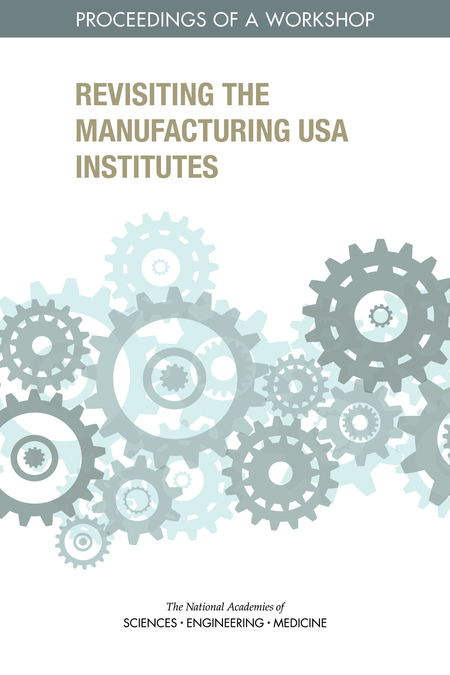 To better understand the role and experiences of the Manufacturing USA institutes, a committee of the National Academies of Sciences, Engineering, and Medicine convened a workshop on May 23, 2017 drawing together institute directors and manufacturing policy experts along with leaders from industry, academia, and government. Given the continued prominence of enhancing domestic manufacturing and international competitiveness in public policy discussions, the National Academies convened a second workshop on November 14, 2018, to monitor the progress of the Manufacturing USA institutes. This publication summarizes the presentations and discussions from this second workshop.