The Effects of Incarceration and Reentry on Community Health and Well-Being: Proceedings of a Workshop (2020)

Get This Book
Visit NAP.edu/10766 to get more information about this book, to buy it in print, or to download it as a free PDF.
« Previous: Front Matter
Page 1 Share Cite
Suggested Citation:"1 Introduction." National Academies of Sciences, Engineering, and Medicine. 2020. The Effects of Incarceration and Reentry on Community Health and Well-Being: Proceedings of a Workshop. Washington, DC: The National Academies Press. doi: 10.17226/25471.
×

The high rate of incarceration in the United States is a major contributor to the nation’s health inequities. African Americans are more than three times as likely to be incarcerated as whites, and incarceration rates are also elevated for Hispanics, Native Americans, and other population groups compared with the general population. In addition, people who are incarcerated differ from the general U.S. population in terms of poverty levels, geographic origins, gender, and a wide range of health indicators. Health equity, then, intersects with incarceration, reentry, and community health.

To examine the connection between incarceration and health inequities, the Roundtable on the Promotion of Health Equity held a workshop on June 6, 2018, titled The Effects of Incarceration and Reentry on Community Health and Well-Being.

1 The planning committee’s role was limited to planning the workshop, and the Proceedings of a Workshop was prepared by the rapporteurs as a factual account of what occurred at the workshop. Statements, recommendations, and opinions expressed are those of individual presenters and participants and are not necessarily endorsed or verified by the National Academies of Sciences, Engineering, and Medicine. They should not be construed as reflecting any group consensus.

As part of its commitment to hold workshops in parts of the United States that are particularly affected by the issues being discussed, the roundtable held the workshop at the University of Pennsylvania in Philadelphia, which has one of the highest rates of incarceration of any major American city. It is important to note that the programs and models that are described in this Proceedings of a Workshop are all Philadelphia based, as this is where the workshop took place. As Antonia Villarruel, Margaret Bond Simon Dean of Nursing at the University of Pennsylvania School of Nursing and chair of the roundtable, said in her opening remarks, holding the workshop at the University of Pennsylvania “represents the university’s commitment, as well as the school’s commitment, to working with vulnerable populations, health equity, and social justice.”

Winston Wong of Kaiser Permanente also emphasized the place-based nature of the roundtable’s work. “We look at people and we look at communities,” he said. “We look at how individuals who are part of the fabric of our communities are impacted. And we look at assets as much as we look at barriers and obstacles.”

The workshop objectives were the following:

This publication summarizes the presentations and discussions of the workshop. This proceedings reflect the observations made by workshop participants and should not be seen as representing a consensus of the workshop participants, the roundtable, or the National Academies of Sciences, Engineering, and Medicine. The Statement of Task given to the planning committee can be found in Appendix D.

After this brief introductory chapter, Chapter 2 summarizes the remarks of Kempis “Ghani” Songster, who was released 6 months before the workshop (in December 2017) after serving 30 years in prison. Chapter 3 provides a broad overview of the state of incarceration in the United States and its effects on public health. Chapter 4 looks specifically at the health of women in prisons and jails and at their needs during and after incarceration. Chapter 5 lays out the challenges to individuals and to communities when people held in prisons and jails reenter society. Chapter 6 presents promising practices and models that can help individuals and communities deal with the challenges of reentry. Chapter 7 summarizes the remarks at the workshop of Philadelphia’s district attorney, who has been working to ameliorate what he termed “the twin evils of mass incarceration and mass supervision.” Finally, Chapter 8 provides reflections from several roundtable members on important lessons that emerged from the workshop. 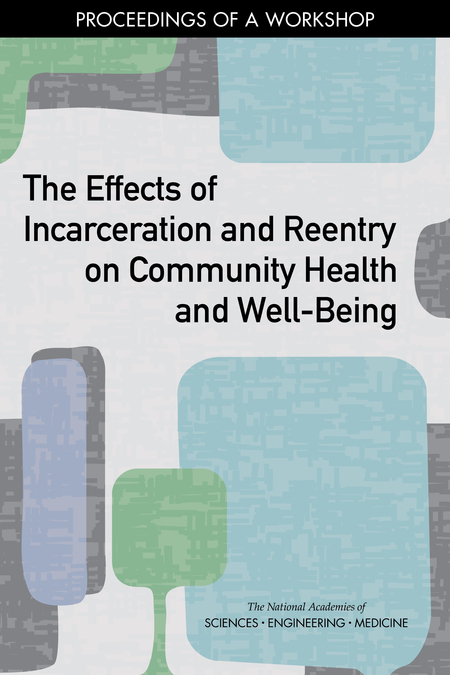 The high rate of incarceration in the United States contributes significantly to the nation’s health inequities, extending beyond those who are imprisoned to families, communities, and the entire society. Since the 1970s, there has been a seven-fold increase in incarceration. This increase and the effects of the post-incarceration reentry disproportionately affect low-income families and communities of color. It is critical to examine the criminal justice system through a new lens and explore opportunities for meaningful improvements that will promote health equity in the United States.

The National Academies convened a workshop on June 6, 2018 to investigate the connection between incarceration and health inequities to better understand the distributive impact of incarceration on low-income families and communities of color. Topics of discussion focused on the experience of incarceration and reentry, mass incarceration as a public health issue, women’s health in jails and prisons, the effects of reentry on the individual and the community, and promising practices and models for reentry. The programs and models that are described in this publication are all Philadelphia-based because Philadelphia has one of the highest rates of incarceration of any major American city. This publication summarizes the presentations and discussions of the workshop.