Evaluation of the Minerva Research Initiative (2020)

Get This Book
Visit NAP.edu/10766 to get more information about this book, to buy it in print, or to download it as a free PDF.
« Previous: Front Matter
Page 1 Share Cite
Suggested Citation:"Summary." National Academies of Sciences, Engineering, and Medicine. 2020. Evaluation of the Minerva Research Initiative. Washington, DC: The National Academies Press. doi: 10.17226/25482.
×

The Minerva Research Initiative is a social science research grant program that funds academic scientists to conduct unclassified basic research relevant to national security issues. Launched in 2008 by Secretary of Defense Robert Gates, the program was motivated by the recognition that the Department of Defense (DoD) was making insufficient use of the intellectual capital of university-based social scientists, as well as a desire to revitalize the role of social science research in informing understanding of the “social, cultural, behavioral, and political forces that shape regions of the world of strategic importance to the U.S.” within DoD and the broader national security community (Minerva Research Initiative, n.d.).

In 2017, DoD asked the National Academies of Sciences, Engineering, and Medicine to convene a committee to evaluate the program’s successes and challenges during its first decade of operation and to offer guidance on its best path going forward. To this end, the committee reviewed existing documentation on the program and its grants, conducted two surveys and a series of semistructured interviews, attended the 2018 Minerva Meeting and Program Review, met with a broad range of stakeholders, and issued a request for comments. As a result of these activities, the committee was able to gain an in-depth understanding of the program from diverse perspectives.

The committee’s review of Minerva’s accomplishments to date revealed that, despite facing challenges with establishing a stable, well-functioning organizational structure as well as resource limitations, the program has made important contributions. The Minerva program is competitive, and funds unclassified basic research on broadly defined topics, enabling the researchers of the awarded grants to pursue questions and analyses they

consider important and to produce research that is relevant to both national security and social science more generally. Over the years, Minerva research has been published in top journals and tends to have strong citation records. The research has also resulted in books and produced policy-relevant statistical models, databases, and mapping tools, reflecting the value placed by the program on innovative outputs beyond publications and conference presentations.

Many of the projects have been built on interdisciplinary collaborations that have incorporated perspectives from a variety of social and behavioral sciences, as well as other fields, such as computer science and engineering. Minerva research has been published in journals representing all major social science fields, as well as other fields (such as computer science, engineering, and mathematics), further illustrating the program’s reach and the range of disciplines that are brought together by the program to answer research questions. Grantees reported that the program has had a positive impact on the amount of dialogue between DoD and the social science community, the number of social science researchers with an interest in research relevant to national security, and the amount of collaboration among researchers working on topics relevant to national security.

We note that the committee’s statement of task included an assessment of Minerva’s quality and impact. Measuring quality and estimating impact, however, are difficult in the context of evaluating programs like Minerva. Measuring the quality of a research product (or a researcher) is conceptually and practically challenging, and the available metrics have substantial limitations, making their use controversial. Estimating Minerva’s impacts is even more difficult because a rigorous approach to evaluating a program’s causal effects requires an analysis of the “counterfactual,” that is, estimation of what would have happened in the absence of the program. The committee determined that the available data were not adequate for this purpose. Furthermore, given that some of Minerva’s key outcomes—such as the contribution and influence of research and the creation of research communities—are realized over a long period of time, it would generally take many years to allow research to be conducted, key outcomes to be observed, and new data to be collected for both a research group with Minerva funding and an experimental or other valid comparison group without Minerva funding (the counterfactual).1 Consequently, the

1 The gold standard approach to evaluating causal impact is a randomized controlled trial, although other statistical designs and methods can sometimes be used to control for confounding and enable a program’s effects to be isolated from other influences. However, the committee determined that implementation of such an approach and collection of data to support credible inferences about Minerva’s impacts could not be accomplished for this evaluation, certainly not within the timeframe for providing useful guidance to DoD.

committee’s ability to answer some of the questions in the statement of task was limited.

It is clear that the vision and goals of the program still resonate in the national security community and among academic researchers, and this report offers the committee’s recommendations for building on that vision to strengthen the program going forward. The report’s key messages and main recommendations are grouped into a thematic summary below.

The Minerva program was structured as a collaboration between research and policy divisions within DoD, and one of the challenges it has faced has been balancing the funding priorities emerging from their differing perspectives and priorities. In particular, DoD has struggled with defining the role of the military service branches (the Air Force Office of Scientific Research, the Army Research Office, and the Office of Naval Research) in the management of the program. Changes introduced in 2017 (around the time the committee undertook this study) increased the role of the service branches in all aspects of decision making related to the Minerva program. While it is too early to assess how the restructured program will function, a key task for DoD is to define the program’s priorities more clearly and make decisions going forward with these priorities in mind.

RECOMMENDATION 5.6: The Minerva program office should specify its priorities for the Minerva Research Initiative, and, as needed, refine the program’s approach to topic selection and grant award to reflect these priorities.

RECOMMENDATION 3.1: The Department of Defense should ensure that the Minerva Research Initiative has a leader with appropriate credentials and stature in a full-time, civil service position.

RECOMMENDATION 3.2: The Department of Defense should evaluate what additional support staff are needed for the Minerva Research Initiative to achieve its goals and implement the recommendations in this report.

communities that can benefit from the body of knowledge generated through the Minerva grants, as well as from the expertise of the funded researchers.

RECOMMENDATION 5.1: The Minerva program office should develop a strategic outreach and dissemination plan for distributing information about the Minerva Research Initiative and about the studies and researchers funded.

The development of a centralized database of all Minerva grants awarded to date should be the highest-priority task for the Minerva program office, as a foundation for dissemination activities.

RECOMMENDATION 3.3: The Minerva program office should make completing the centralized database of the projects and researchers funded under the Minerva Research Initiative a high priority.

RECOMMENDATION 5.2: The public-facing component of the grantee database to be developed by the Minerva program office should include detailed information about the funded projects, providing a current and historical picture of the portfolio of research that has been conducted and an inventory of the researchers’ expertise. The database should be user-friendly and searchable.

Several areas need particular attention as part of a comprehensive outreach and dissemination strategy. Awareness of the Minerva program needs to be increased both internally, within DoD, and in the broader national security community. In addition, grantees would greatly benefit from the Minerva program office’s assistance in creating opportunities for interaction with policy makers and others who could benefit from their research and their broader expertise.

RECOMMENDATION 3.4: The Minerva program office should develop relationships with potential supporters of the Minerva Research Initiative and users of the research, both among Department of Defense leadership and externally, to increase awareness of the program and expand use of its funded research and the expertise of its grantees.

RECOMMENDATION 5.3: The Minerva program office should develop mechanisms for facilitating interaction between grantees and potential users of their research or expertise in the broader national security community.

RECOMMENDATION 5.5: The Minerva Conference should continue to serve as a key mechanism for outreach, dissemination, and interaction and should be held annually, on a predictable schedule.

The committee’s overall assessment is that during its first decade, the Minerva program has demonstrated its ability to make meaningful contributions to the body of social science research on a range of topics related to national security. Considering the program’s original vision and continuing goals, the committee’s recommendations highlight areas in which the Minerva program office needs to focus its efforts to strengthen the program’s foundations and take advantage of opportunities for broadening its reach and usefulness going forward.

Next: 1 Introduction »
Evaluation of the Minerva Research Initiative Get This Book
× 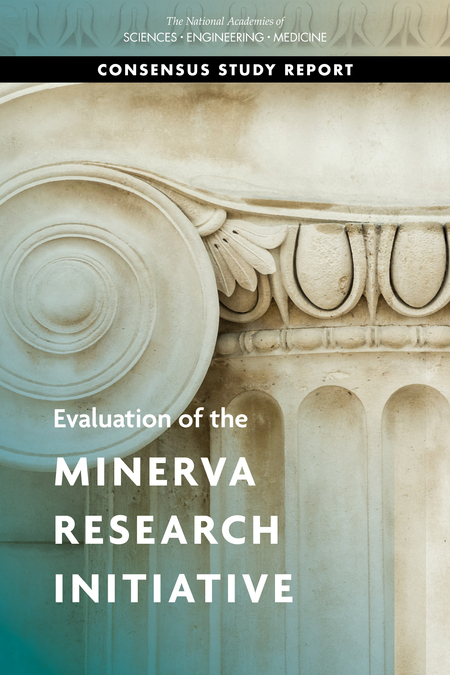 The Minerva Research Initiative is a Department of Defense (DoD) social science grant program that funds unclassified basic research relevant to national security. The goal of the program is to make use of the intellectual capital of university-based social scientists to inform understanding of issues important to DoD and the broader national security community. Evaluation of the Minerva Research Initiative discusses the program's successes and challenges over its first decade of operation, and highlights ways to strengthen the program’s foundations and take advantage of opportunities for broadening its reach and usefulness.