Get This Book
Visit NAP.edu/10766 to get more information about this book, to buy it in print, or to download it as a free PDF.
« Previous: Front Matter
Page 1 Share Cite
Suggested Citation:"Summary." National Academies of Sciences, Engineering, and Medicine. 2020. Promoting Positive Adolescent Health Behaviors and Outcomes: Thriving in the 21st Century. Washington, DC: The National Academies Press. doi: 10.17226/25552.
×

Adolescence is a critical developmental period in which youth grow, explore, learn, and develop important skills that prepare them for adulthood. While most youth navigate this period successfully, others may need additional support to be healthy and thrive. This support is often provided through prevention or intervention programs designed to promote healthy behaviors and outcomes from adolescence through adulthood. Accordingly, the Office of the Assistant Secretary for Health (OASH) in the U.S. Department of Health and Human Services requested that the National Academies of Sciences, Engineering, and Medicine convene an ad hoc committee to review key questions related to the effective implementation of the Teen Pregnancy Prevention (TPP) program using an optimal health lens. To carry out this review, the National Academies convened the nine-member Committee on Applying Lessons of Optimal Adolescent Health to Improve Behavioral Outcomes for Youth. In this report, the committee uses an optimal health framework to (1) identify core components of risk behavior prevention programs that can be used to improve a variety of adolescent health outcomes, and (2) develop evidence-based recommendations for research and the effective implementation of federal programming initiatives focused on adolescent health.

SELECTION OF BEHAVIORS AND RELATED OUTCOMES

This study’s statement of task directed the committee to select the programs and outcomes to examine for inclusion in this report. Given the broad scope of youth risk behaviors and the limited time available for

this consensus study, the committee chose to focus on three specific risk behaviors and their related health outcomes: sexual behavior, because the statement of task focuses on the TPP program; alcohol use, because, like sexual behavior, it is a behavior that becomes socially sanctioned with maturity; and tobacco use, because of the decades of research on prevention programs and interventions in this area that the committee considered to be informative to its task. However, the committee also noted important differences among these behaviors that limit comparisons of their respective prevention programs. In particular, while alcohol and tobacco are neurotoxic to the developing adolescent brain, sexual development represents a critical developmental task of adolescence that provides the building blocks for adult relationships. Thus, the committee recognized that, in contrast with the prevention of substance use, support for healthy sexual development is as important as prevention of the negative health outcomes associated with sexual behavior (e.g., unintended pregnancy, sexually transmitted infections) during adolescence.

As a framework for this report, the committee used O’Donnell’s definition of optimal health as “a dynamic balance of physical, emotional, social, spiritual, and intellectual health.” Importantly, this framework stresses the influences of the physical and social environments, which for adolescents include parents, peers, schools, communities, and media. These factors, as well as the social determinants that drive them, either increase or reduce the likelihood of an adolescent’s engaging in unhealthy risk behaviors. Given that the committee found only one definition of “optimal health” in the peer-reviewed literature, however, the use of this framework should not be interpreted as an endorsement of its use in adolescent health programming.

Neurobiological changes that occur during adolescence influence young people to seek out novel experiences and make sense of their environments through exploration, experimentation, and risk taking, which help adolescents transition from dependence on parents or other caregivers toward independence and self-identity. Yet while risk-taking behaviors are a normal part of adolescence, adolescents are also more likely than members of other age groups to participate in unhealthy risk behaviors, such as unprotected sexual activity, binge drinking, and tobacco use. These behaviors can lead to outcomes that not only threaten an adolescent’s own health but also can endanger others.

Demographic trends for these three risk behaviors are reviewed in the report using data from the Youth Risk Behavior Survey, a large, nationally representative sample of in-school adolescents that has been administered every 2 years since 1991. Health outcome data are drawn from the Centers for Disease Control and Prevention’s surveillance systems, the U.S. Department of Transportation, and the National Survey of Family Growth.

Broadly, these data show that the prevalence of adolescent sexual behavior, alcohol use, and cigarette use has decreased over time, while e-cigarette use and vaping among adolescents have increased significantly in recent years. Importantly, despite decreases in adolescent sexual behavior among all racial/ethnic groups, significant disparities remain in pregnancy, birth, and sexually transmitted infection rates—disparities that can be linked to differences in access to opportunities and supports. The committee therefore concluded that disadvantaged youth need more resources to reduce these disparities and ensure access to comparable opportunities.

CORE COMPONENTS OF PROGRAMS AND INTERVENTIONS

The committee was charged with identifying the key elements, or core components, that help make programs and interventions effective in improving outcomes for youth. Such components are defined as discrete, reliably identifiable techniques, strategies, or practices that are intended to influence the behavior or well-being of a service recipient. To carry out this task, the committee conducted a systematic review of systematic reviews and meta-analyses, focusing on programs aimed at promoting positive adolescent health behaviors and outcomes.

Few studies included in the committee’s review were designed to identify and evaluate the effectiveness of specific core components. However, the committee’s review did show the strengths of social-emotional learning and positive youth development programs that are provided from childhood throughout adolescence. These programs teach skills that, if learned successfully, underlie and impact a variety of health behaviors and outcomes across the life course by providing a foundation upon which other specific behavioral skills and services (e.g., understanding social norms around drugs, negotiating condom use, access to contraception) can be built. Furthermore, those programs that involve youth, families, and communities and that target social determinants of health have been shown to help reduce disparities in health outcomes related to social and economic disadvantage.

Based on the results of the review described above, the committee arrived at three recommendations.

RECOMMENDATION 1: The U.S. Department of Health and Human Services should fund additional research aimed at identifying, measuring, and evaluating the effectiveness of specific core components of programs and interventions focused on promoting positive health behaviors and outcomes among adolescents.

RECOMMENDATION 2: The Division of Adolescent and School Health of the Centers for Disease Control and Prevention should

RECOMMENDATION 3: The Office of the Assistant Secretary for Health within the U.S. Department of Health and Human Services should fund universal, holistic, multicomponent programs that meet all of the following criteria:

Promising Approach 1: Programs can benefit from implementing and evaluating policies and practices that promote inclusiveness and equity so that all youth are able to thrive.

Next: 1 Introduction »
Promoting Positive Adolescent Health Behaviors and Outcomes: Thriving in the 21st Century Get This Book
× 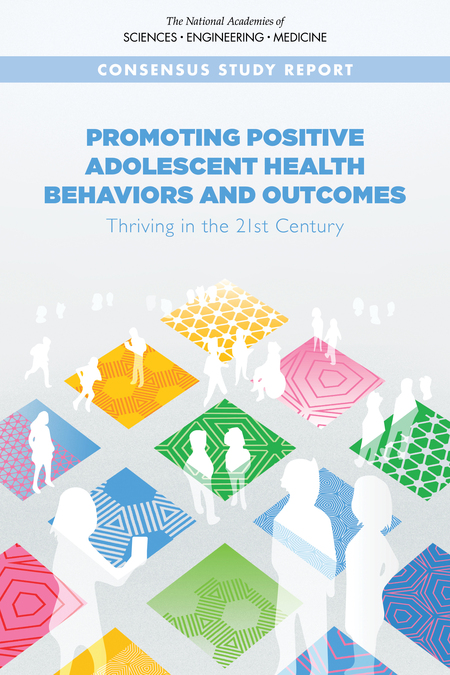 Adolescence is a critical growth period in which youth develop essential skills that prepare them for adulthood. Prevention and intervention programs are designed to meet the needs of adolescents who require additional support and promote healthy behaviors and outcomes. To ensure the success of these efforts, it is essential that they include reliably identifiable techniques, strategies, or practices that have been proven effective.