Get This Book
Visit NAP.edu/10766 to get more information about this book, to buy it in print, or to download it as a free PDF.
« Previous: 3 Level of Ambition
Page 12 Share Cite
Suggested Citation:"4 Ability to Meet Science Objectives in Decadal Surveys." National Academies of Sciences, Engineering, and Medicine. 2019. Review of the Draft 2019 Science Mission Directorate Science Plan. Washington, DC: The National Academies Press. doi: 10.17226/25587.
×

The science objectives that the decadal surveys prioritize for each division are among the highest priorities in SMD. A clear set of guiding principles and leadership priorities could enable SMD to more effectively and efficiently achieve these objectives. This new approach requires buy-in from each division’s management and a clear plan for how to embody this new approach in executing the decadal surveys’ priorities, as well as specific ways to evaluate success.

The overarching leadership priorities (see Figure 1.1) provide a framework for carrying out SMD’s mission. Inclusion of activities that encompass human exploration and innovation support the main mission to carry out the decadal surveys’ science objectives. However, the draft document does not make clear how SMD plans to relate the guiding principles to science questions or to the objectives of its four science divisions. Nor does the draft document indicate how SMD will collaborate with NASA’s other directorates (e.g., the Human Exploration and Operations Mission Directorate). Although three of the four space science decadal surveys are explicitly mentioned in the text, the omission of any mention of the fourth—the 2018 decadal survey of Earth science and applications—is puzzling.

Many of the descriptions of leadership priorities lack mechanisms of effectuation or examples in the division-specific sections (i.e., the materials in the second half of the draft document describing SMD’s four science divisions). Actual implementation details could be described at length in another document (which could be cited), with brief descriptions included in the draft document. For example, Strategy 2.3 explains the mechanisms by which a focus on research investments with both high intellectual risk and high impact could be achieved, but not all sections include this level of detail. The draft document could, for example, outline actions that would contribute to realization of higher-risk projects that have high intellectual yield.

The “Innovation” leadership priority (i.e., the draft document’s “Focus 2”) as written is limited to innovations in technology and science. However, programmatic innovations are not mentioned. Such innovations could improve efficiency, reduce costs, and thereby enable a wider range of science to be investigated. The most cost-effective innovation often comes from establishing a user perspective into projects and internal processes. Areas where programmatic innovations could be explored include management, contracting, oversight, and considerations for continuity of observations. For example, earlier reports from the National Academies have recommended innovative ways to make missions more economical.1

Recommendation: Broaden the “Innovation” leadership priority to include aspects that go beyond technology and high-risk science.

The draft document does not contain material that would describe how a balanced program is established or how to assess whether the call to “Execute a balanced science program based on discipline-specific guidance from the National Academies” (i.e., the draft document’s Strategy 1.1) is reached..

Recommendation: Spell out clearly the key role of fundamental science as a foundation for exploration and technology development.

Some of the guiding principles are commendable. For example, “Advance discovery in emerging fields by identifying and exploiting cross-disciplinary opportunities between traditional science disciplines” (i.e., Strategy 1.3) is important for the future, but it is unclear by what methods it will be realized or how success will be assessed.

Recommendation: Highlight the means to implement science that spans multiple divisions and makes seamless collaboration across NASA directorates a target.

The draft document outlines the need to find an optimal balance for risk-taking, which currently is commonly perceived by the scientific and engineering communities to be too low. This important topic spans intellectual and technological activities and the balance between the large strategic missions and the smaller ones under the direction of a principal investigator.

Recommendation: Elevate risk-taking from innovation to a wider context. For example, outline actions that would contribute to the realization of higher-risk projects that have high intellectual yield.

Although the importance of technology to NASA’s ambitious quests is well spelled out in the draft document, the key role of fundamental science is not described as clearly. What is needed is a clear articulation of the role of NASA, which provides observations and supports progress in fundamental science, and other entities, which add information and context, to protect public and private assets.

Recommendation: Outline how the fundamental science can be enhanced and widened in scope to encompass interactions with user communities, including universities, private industry, not-for-profit organizations, and other government agencies.

Another admirable guiding principle is Strategy 1.4, “Develop a Directorate-wide, target-audience focused approach to applied programs, including Earth Science Applications, Space Weather, Planetary Defense, and Space Situational Awareness,” which addresses areas where fundamental research has potential for applications. But, in many cases, these fields are not sufficiently mature to produce readily usable applications or services and will require basic research in close interaction with the potential user communities to offer opportunities for bridging research to the commercial or governmental user communities.

Next: 5 Identification of Additional Guiding Principles »
Review of the Draft 2019 Science Mission Directorate Science Plan Get This Book
× 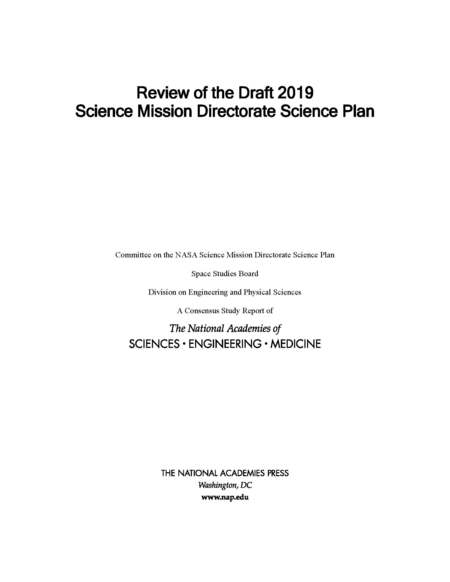