Implications of the California Wildfires for Health, Communities, and Preparedness: Proceedings of a Workshop (2020)

Get This Book
Visit NAP.edu/10766 to get more information about this book, to buy it in print, or to download it as a free PDF.
« Previous: Front Matter
Page 1 Share Cite
Suggested Citation:"1 Introduction and Overview." National Academies of Sciences, Engineering, and Medicine. 2020. Implications of the California Wildfires for Health, Communities, and Preparedness: Proceedings of a Workshop. Washington, DC: The National Academies Press. doi: 10.17226/25622.
×

California and other wildfire-prone western states have experienced a substantial increase in the number and intensity of wildfires in recent years. Eight of the 10 largest wildfires in California have occurred since 2000. In November 2018 the Camp Fire in northern California killed at least 85 people and destroyed more than 18,000 structures, becoming California’s deadliest and most destructive wildfire on record (see Figure 1-1). Wildlands and climate experts expect these trends to continue and quite likely to worsen in coming years.

Wildfires and other disasters can be particularly devastating for vulnerable communities (Fothergill et al., 1999). Members of these communities tend to experience worse health outcomes from disasters, have fewer resources for responding and rebuilding, and receive less assistance from state, local, and federal agencies. Because burning wood releases particulate matter and other toxicants, the health effects of wildfires extend well beyond burns. In addition, deposition of toxicants in soil and water can result in chronic as well as acute exposures. Vulnerable communities tend to have fewer resources with which to prepare for and respond to environmental disasters such as a wildfire. Even relatively small expenses, such as tree trimming, brush removal, or other fire prevention services, may be beyond the financial means of community members.

On June 4–5, 2019, four different entities within the National Academies of Sciences, Engineering, and Medicine—the Forum on Medical and Public Health Preparedness for Disasters and Emergencies; the Roundtable on Population Health Improvement; the Roundtable on the Promotion of Health Equity; and the Roundtable on Environmental Health

Services, Research, and Medicine—held a workshop titled Implications of the California Wildfires for Health, Communities, and Preparedness at the Betty Irene Moore School of Nursing at the University of California (UC), Davis. The Statement of Task can be found in Appendix A. For reference, see Figure 1-2 for a map of California counties and major cities. As Kenneth Kizer, distinguished professor in the UC Davis School of Medicine and the Betty Irene Moore School of Nursing and chair of the planning committee for the workshop, said in his welcoming remarks, a major challenge facing the planning committee was the amount of material that could be presented at the workshop.1 “One of the underlying premises of this workshop is that the nature of the wildfires that we have seen in the last few years is the ‘new normal,’ both in the frequency and number

of different locations and in the intensity of fires, and that what we have seen is going to be repeated in the future,” said Kizer, who worked as a firefighter during college. Many communities and populations are at risk and want to know what they can do to prevent and prepare for wildfires, “because what we have seen in the past few years is going to be what we see going forward.”

Wildfires are creating a new model of a public health crisis, added David Lubarsky, vice chancellor of human health sciences at UC Davis and chief executive officer of UC Davis Health. Wildfires are intensive and unplanned long-term events that pose complex and wide-ranging problems. Population growth, climate change, weather extremes, intermittent droughts, record rains, and other factors are interacting in ways that are difficult to dissect, understand, and ameliorate. Earthquakes, mudslides, urban unrest, and other issues are usually here and then gone, said Lubarsky. In contrast, large wildfires can go on for long periods of time and have wide-ranging and long-lasting impacts across large areas.

The issues posed by wildfires have caught the attention of academic health systems around the nation, Lubarsky noted. For example, he had recently written an editorial about air quality in Sacramento following the Camp Fire, which for 5 days was the worst in the world. “I was shocked, because I have been to Shanghai and Beijing on bad days,” he said. “This beat all of them.”

Figuring out how to help people in an acute time frame and then helping to deal with the social devastation, health care interruptions, and health care impacts over the long term are both challenges, Lubarsky said. For example, UC Davis had recently partnered with a hospital in Chico to open a chemotherapy infusion center to give people easier access to chemotherapy following the damage done by the Camp Fire to the Adventist Feather River Hospital in Paradise. “That is one of those things you do not think about. What do you do with people who have chronic illnesses who are dependent on the services that were previously provided in a scarred area?”

Both Lubarsky and Deborah Ward, Dignity Health Dean’s Chair for Nursing Leadership and clinical professor at the Betty Irene Moore School of Medicine, who also spoke during the opening session, observed that UC Davis was a leader in the response to the Camp Fire. Students at the School of Nursing and elsewhere immediately stepped up to respond to the unfolding disaster occurring in and around Paradise, Ward said. They collected and delivered goods and supplies and worked at shelter clinics, in part to care for frail, elderly evacuees. They spent countless hours providing urgently needed care to victims of the fire. They encountered amazing and disturbing episodes, according to Ward. “One of our nursing students, Brandon, suddenly found himself caring for people whose feet were burned as they had raced from their homes trying to escape the fire.” As one nursing student observed to Ward, “This is a good reminder of why we want to be health care providers. This is about serving our community and meeting its needs.”

Lubarsky pointed out that UC Davis researchers have been investigating the impact of environmental toxins on populations, including the effects of wildfire smoke. “Figuring out how we are going to actually make a dif-

ference in the trajectory of the people and our environment that has been impacted by the fires is incredibly important for northern California,” he said.

ORGANIZATION OF THE WORKSHOP

This summary of the workshop largely parallels the workshop agenda (see Appendix B). Chapter 2 provides an overview of wildfires in California and also looks at a particular wildfire in southwestern Colorado. Climate change is contributing to an intensification of wildfires in the western United States, these speakers said, which is requiring a greater breadth and depth of potential responses. Considerations of health equity are a critical aspect of these responses and can help all communities and populations become more resilient to future wildfires.

Chapter 3 discusses the populations impacted by wildfires, especially the vulnerable populations and communities that experience disproportionate impacts from natural disasters. As speakers in this panel pointed out, these communities also have experiences and traditional knowledge that can reduce not only their own vulnerability but that of other groups.

Chapter 4 examines the wide-ranging health effects of wildfires, including effects on the respiratory system, cardiovascular system, and immune system. Some of these effects are acute and others chronic, pointing to the need to begin research quickly after a wildfire event. Doing such research requires good measures of both exposures and health effects, and each measure has its own challenges. New technologies could help in both areas.

Chapter 5 looks at the recovery process, reversing the usual order of discussing preparedness first, response second, and recovery third. Coordination at all levels of government and among sectors is a theme of long-term recovery processes, given that much of the burden for recovery typically falls on states and local communities. In addition, communities have distinct resources, such as nearby academic institutions, that can help them recover from wildfires in ways that are particularly suited to local situations.

Chapter 6 considers how to enhance operational response to wildfires. The responses to wildfires can be wide ranging and involve a variety of public- and private-sector institutions. Leveraging the expertise of these

2 The trailer for the film, which features several people who spoke at the workshop, is available at https://www.youtube.com/watch?v=v24296K-qVE (accessed November 25, 2019).

organizations and coordinating activities can increase the effectiveness of responses and reduce both the physical and the mental health effects of wildfires.

Chapter 7 turns to the potential for mitigation and preparedness. These activities are also wide ranging and have long time frames and extensive planning requirements. Yet, they shape the response and recovery actions that take place on short- and medium-term time frames. The zoning, design, construction, and maintenance of structures, for instance, can have a critical influence on what happens during and after a wildfire.

Chapter 8, the final chapter, closes the proceedings with the reflections of panel moderators and members of the roundtables and forum that organized the workshop on the themes that emerged and their implications for the future. 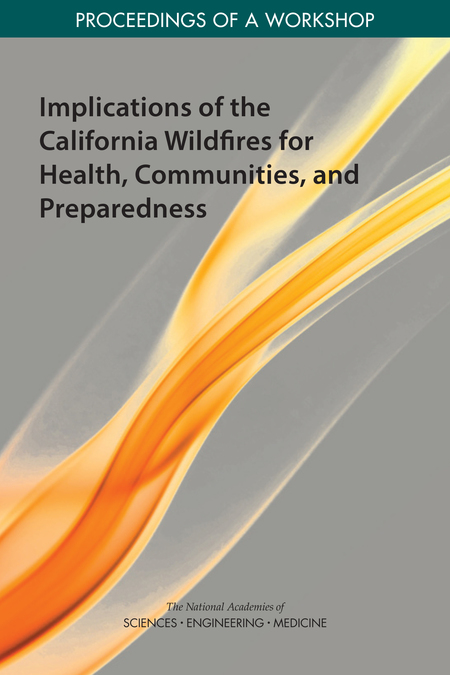 California and other wildfire-prone western states have experienced a substantial increase in the number and intensity of wildfires in recent years. Wildlands and climate experts expect these trends to continue and quite likely to worsen in coming years. Wildfires and other disasters can be particularly devastating for vulnerable communities. Members of these communities tend to experience worse health outcomes from disasters, have fewer resources for responding and rebuilding, and receive less assistance from state, local, and federal agencies. Because burning wood releases particulate matter and other toxicants, the health effects of wildfires extend well beyond burns. In addition, deposition of toxicants in soil and water can result in chronic as well as acute exposures.

On June 4-5, 2019, four different entities within the National Academies of Sciences, Engineering, and Medicine held a workshop titled Implications of the California Wildfires for Health, Communities, and Preparedness at the Betty Irene Moore School of Nursing at the University of California, Davis. The workshop explored the population health, environmental health, emergency preparedness, and health equity consequences of increasingly strong and numerous wildfires, particularly in California. This publication is a summary of the presentations and discussion of the workshop.