Get This Book
Visit NAP.edu/10766 to get more information about this book, to buy it in print, or to download it as a free PDF.
« Previous: Appendix C: Commissioned Reports That Informed the Four Mixed-Method Reviews
Page 435 Share Cite
Suggested Citation:"Appendix D: Commissioned Scoping Review and Series of Evidence Maps." National Academies of Sciences, Engineering, and Medicine. 2020. Evidence-Based Practice for Public Health Emergency Preparedness and Response. Washington, DC: The National Academies Press. doi: 10.17226/25650.
×

The committee sought to understand the extent, range, and nature of public health emergency preparedness and response (PHEPR) research across the 15 Centers for Disease Control and Prevention (CDC) PHEPR Capabilities, with a specific focus on studies evaluating the impact of PHEPR practices, and commissioned an expert group to visualize these findings using high-level evidence maps. This appendix contains excerpts and evidence maps from the group’s full paper, “Review and Evidence Mapping of Scholarly Publications Within the CDC’s 15 Public Health Emergency Preparedness and Response Capabilities.”1

A total of 1,692 articles (published 2001–2019), consisting of quantitative (comparative and noncomparative) impact studies, quantitative nonimpact studies, qualitative studies, modeling studies, literature reviews, after action reports and case reports, and commentaries, were initially included in the commissioned scoping review.2 Ultimately, the committee was most interested in those studies that could potentially provide evidence regarding the 15 PHEPR Capabilities. Therefore, after this initial classification of all study designs, commentaries and literature reviews were excluded from subsequent analyses, resulting in a total of 1,106 articles for final inclusion.3

1 The full paper can be found under the Resources tab at http://www.nap.edu/catalog/25650.

2 The task of finding and classifying the body of research underlying all of the 15 PHEPR Capabilities was challenging because of the broad scope, complexity, and nature of the research topics. The evidence maps prepared for this study certainly do not contain every published study examining PHEPR practices since 2001. The authors of the scoping review did not attempt to capture after action reports that were not published in journals and searchable in bibliographic databases. Future efforts could focus on conducting detailed scoping reviews on specific capabilities or practices.

3 The 1,106 articles included in the final analysis were described in the commissioned report as “evidentiary studies,” which required some form of systematic data collection and analysis that could provide evidence regarding the PHEPR Capabilities. Nonevidentiary studies include opinion, concept, and position papers, as well as literature reviews.

DESCRIPTIVE MAPS OF ARTICLES WITHIN THE 15 PHEPR CAPABILITIES

Next: Appendix E: Public Committee Meeting Agendas and Proceedings of a Workshop - in Brief »
Evidence-Based Practice for Public Health Emergency Preparedness and Response Get This Book
× 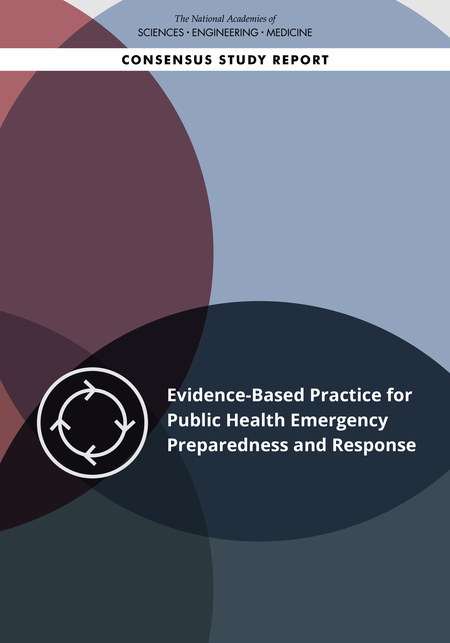 Evidence-Based Practice for Public Health Emergency Preparedness and Response reviews the state of the evidence on PHEPR practices and the improvements necessary to move the field forward and to strengthen the PHEPR system. This publication evaluates PHEPR evidence to understand the balance of benefits and harms of PHEPR practices, with a focus on four main areas of PHEPR: engagement with and training of community-based partners to improve the outcomes of at-risk populations after public health emergencies; activation of a public health emergency operations center; communication of public health alerts and guidance to technical audiences during a public health emergency; and implementation of quarantine to reduce the spread of contagious illness.