Get This Book
Visit NAP.edu/10766 to get more information about this book, to buy it in print, or to download it as a free PDF.
« Previous: Summary
Page 9 Share Cite
Suggested Citation:"1 Introduction." National Academies of Sciences, Engineering, and Medicine. 2020. Leading Health Indicators 2030: Advancing Health, Equity, and Well-Being. Washington, DC: The National Academies Press. doi: 10.17226/25682.
×

In 1979, Congress authorized the Secretary of Health and Human Services through Title XVII of the Public Health Service Act to set national disease prevention and health promotion goals and objectives. Starting with 1980 and for each subsequent decade, the Department of Health and Human Services (HHS) has launched and overseen a Healthy People initiative. Like its predecessors, Healthy People 2030 (HP2030) includes a conceptual framework, a broad list of objectives organized by topics (objectives expected to be finalized by HHS in early 2020), and ultimately, a smaller set of high-level priority measures called Leading Health Indicators (LHIs) (see Figure S-1, reprised from NASEM, 2019c).

The National Academies of Sciences, Engineering, and Medicine convened a consensus study committee at the request of the Office of the Assistant Secretary for Health to provide advice on two components of the HP2030 effort. The Statement of Task is provided in Box 1-1. In May 2019, the charge was clarified slightly to add the following sentence: “The committee may identify gaps and may recommend new objectives for LHI consideration that meet the core objective criteria.” This change was made in recognition that the Federal Interagency Workgroup (FIW), which would make final decisions about the LHIs, was instructed by HHS to draw the LHIs only from the core objectives for HP2030. A report from the Secretary’s Advisory Committee on National Health Promotion and Disease Prevention Objectives for 2030 (SAC) had highlighted potential areas for adding to the draft core objectives to ensure the availability of appropriate candidates for LHIs (SAC, 2019). Given the revised charge to the committee and as the final core objectives will not be announced until

The Department of Health and Human Services Office of the Assistant Secretary of Health requests that the National Academies of Sciences, Engineering, and Medicine convene an ad hoc committee to assist in the development of Leading Health Indicators (LHIs) for Healthy People 2030. The committee will develop (1) recommendations regarding the criteria for selecting LHIs and (2) a slate of LHIs that will serve as options for the Healthy People Federal Interagency Workgroup to consider as they develop the final criteria and set of LHIs for Healthy People 2030. The committee may identify gaps and may recommend new objectives for LHI consideration that meet the core objective criteria.

after this report is released, this report has drawn on the core objectives submitted for public review by HHS (2018), considered the recommendations of the SAC in its reports, and explained the committee’s judgment in identifying new objectives that could serve as LHIs that best reflect the final HP2030 mission, vision, and framework (HHS, 2018).

After starting its work in January 2019, the committee held three information-gathering meetings between February and May 2019—two were web-based and consisted of presentations from HHS and the leadership of the SAC and its relevant subcommittees, and one meeting took place at the Keck Center of the National Academies in Washington, DC, and included speakers from HHS and the SAC, as well as national experts on health metrics and data sources.1 In addition to these, the committee held 19 virtual meetings to deliberate about report findings and recommendations.

The committee recognizes that the HP2030 is an enormous undertaking by HHS, the FIW, and the SAC. The effort has included multiple meetings of and reports from the SAC, an extensive and in-depth process by the FIW to substantially reduce the large number of objectives (1,200 for HP2020) to a more manageable set (355 draft core objectives, along with additional developmental and research objectives), and HHS’s oversight of a complex, multi-component process that included gathering stakeholder input. The committee also appreciated the SAC’s detailed

presentations and responsiveness in extensive conversations that occurred at the public meetings described above.

The committee approached the task by gathering information from several sources as inputs into its deliberations about an appropriately constructed, parsimonious, and balanced set of LHIs. Although it did not have the time or resources for a systematic search of the literature, the committee’s information gathering involved a wide-ranging literature search. Sources included the reports and summaries of meetings of the SAC; presentations and materials from three information-gathering meetings; past Healthy People reports; articles from peer reviewed journals; reports, briefs, and white papers; and past reports from National Academies consensus committees.

As has been well documented in previous Institute of Medicine publications, health and related metrics have been proliferating for many years (IOM, 2011, 2015b), and the corresponding literature is vast. The committee focused primarily on highly reputable sources of metrics sets currently available to the field, some of which were presented by experts at its May 28, 2019, information-gathering meeting. Members also developed an efficient framework for reviewing and weighing that evidence, and on that basis, for coming to consensus around a set of indicators to put forward. This is discussed in Chapter 2.

On its review of the notes and slides from the June 2019 meeting of the SAC, the committee found the graphic designed to illustrate the HP2030 Framework (see Figure 1-1) to be a helpful tool that articulates and further explains the core focus of the HP2030 effort. Before viewing the SAC graphic, the committee had begun collecting other graphic representations of the multiple factors that contribute to health and wellbeing. These range from the World Health Organization (WHO) conceptual framework on the social determinants of health to the HP2020 social determinants of health graphic. The committee believes that other models, including those that are dynamic in the sense that they illustrate the relationship and effect of various factors to key outcomes of health and well-being, could be helpful toward operationalizing the themes and sub-themes2 of the HP2030 graphic (see Figure 1-1). As an example, the WHO conceptual framework for action on the social determinants of health is intended to “highlight the difference between levels of causation, distinguishing between the mechanisms by which social hierarchies are created, and the conditions of daily life which then result” (WHO, 2010). The WHO framework can shed light on relationships among components of the HP2030 graphic, which appears to be primarily a graphic representation of the HP2030 narrative framework’s list of foundational principles.

Another graphic, the National Institute on Minority Health and Health Disparities (NIMHD) Minority Health and Health Disparities Research Framework, offers an ecological model-informed framing of what it calls “levels of influence” along the top of the table—individual, interpersonal, community, and societal—and the “domains of influence” in the left-hand column—from the biological to the built environment.3

The set of LHIs proposed in this report is different from the HP2010 and HP2020 sets in several ways: it is reflective of the HP2030 Framework, it contains fewer measures of specific health conditions, and it is less closely linked with health care delivery system metrics and capabilities. To identify a set of indicators to serve as a North Star for national efforts to improve equitable health and well-being, in keeping with the priorities of the HP2030 Framework the composition of the LHIs measures needed to be rethought.

3 Both WHO and NIMHD graphics are provided in Appendix C. 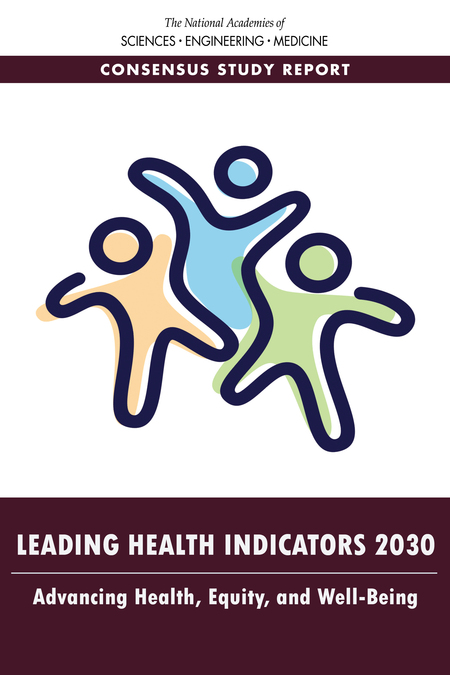 Beginning in 1979 and in each subsequent decades, the U.S. Department of Health and Human Services (HHS) has overseen the Healthy People initiative to set national goals and objectives for health promotion and disease prevention. At the request of HHS, this study presents a slate of Leading Health Indicators (LHIs) that will serve as options for the Healthy People Federal Interagency Workgroup to consider as they develop the final criteria and set of LHIs for Healthy People 2030.