Get This Book
Visit NAP.edu/10766 to get more information about this book, to buy it in print, or to download it as a free PDF.
Page 1 Share Cite
Suggested Citation:"Rapid Expert Consultation." National Academies of Sciences, Engineering, and Medicine. 2020. Rapid Expert Consultation on Social Distancing for the COVID-19 Pandemic (March 19, 2020). Washington, DC: The National Academies Press. doi: 10.17226/25753.
×

Executive Office of the President

This letter responds to your question about evidence on the effectiveness and costs of social distancing measures in contending with COVID-19.

Respiratory viruses are transmitted from person to person via air droplet (talk, sneeze, cough), suspended droplet nuclei (<5 microns diameter; sneeze, cough), and surface fomites (touch contaminated surface and then touch mucous membrane in eye, nose, mouth). Social distancing measures are based on the idea of interrupting these forms of transmission by separating infected and uninfected persons. In the absence of a vaccine or effective prophylactic agents, social distancing is the principal tool available to blunt the force of an epidemic.1

This response was prepared by staff of the National Academies of Sciences, Engineering, and Medicine based on input from Alexandra Phelan and me. Ned Calonge, The Colorado Trust; Sue Curry, University of Iowa; and Steven Teutsch, University of California, Los Angeles, reviewed this document, and Ellen Wright Clayton, Vanderbilt University, approved the document on behalf of the Report Review Committee. The attached materials summarize evidence bearing on the effectiveness of social distancing measures, and they demonstrate that social distancing measures are effective. However, their effectiveness depends on such factors as early implementation and compliance.

Most of these studies are based on past experience with influenza. Some are empirical studies of the experience in different places that employed varying degrees of social separation during the great influenza pandemic of 1918-1919. Others are modeling exercises using available data and

certain assumptions about relevant characteristics of an infection, such as the basic reproductive number, degree of mixing, and fraction of susceptible individuals. In general, these studies support the value of social distancing in reducing the amount of illness and death and in spreading the onset of illness over a longer time period (“flattening the curve”), which makes clinical management more feasible. For example, one study of 34 U.S. cities during the 1918-1919 influenza pandemic found that those communities that implemented social distancing measures earlier experienced greater delays in reaching peak mortality, lower peak mortality rates, and lower total mortality.2

In interpreting these data, it is important to note that “social distancing” can cover a wide range of community-based interventions, from closing schools and workplaces to eliminating mass public events to wearing face masks, and it is not always clear exactly which intervention is contributing what degree to the differential outcomes. Also important in the current context are differences between influenza and SARS-CoV-2 in such key attributes as transmission rate, incubation period, uncertainty regarding children as vectors, and pre-existing immunity in the population.

In general, studies based on historical data and on modeling both indicate that social distancing interventions are more effective when instituted early in the course of an epidemic.3,4

Only a handful of studies consider cost-effectiveness of this class of interventions, and many of them include consideration of pharmaceutical interventions such as antiviral treatments and vaccination strategies that are not currently available for this pandemic.5,6,7,8 In general, these studies do not fully incorporate all social and economic costs that attend to such interventions as the cancellation of travel and the suspension of many businesses. They are not updated to today’s economic and social circumstances, and the comparison to “benefits” relate to the burden of influenza, not SARS-CoV-2. Therefore, they do not have much to reveal about the cost or cost-effectiveness of today’s interventions in the current pandemic.

More pertinent to decision making today about COVID-19 is the experience of other countries where the pandemic preceded outbreaks in the United States.

In an informative analysis, for example, Wang et al. evaluated the impact of social distancing and case finding and isolation of patients over three phases of the epidemic in Wuhan, China.9 Prior to introducing any of these measures, the basic reproductive number was estimated to be 3.86 (95% credible interval 3.74 to 3.97). This period, from December 8, 2019, to January 23, 2020, was marked by an exponential growth in new cases. From January 23, 2020, to February 2, 2020, the following social distancing measures were implemented: home quarantine for suspected cases, cordon sanitaire, suspension of public transportation, closure of entertainment venues and public spaces, compulsory wearing of face masks, mandated personal hygiene, and body temperature self-monitoring. During this period, the reproductive number fell to 1.26, a substantial improvement, but still above the level of 1.0 that sustains spread. From February 2, 2020, and on, cordon sanitaire, suspension of public transportation, closure of entertainment venues and public spaces continued, and the following measures were also implemented: centralized isolation in designated hospitals for cases; mobile-cabin hospitals, schools, and hotels for exposed and possible cases; universal and strict stay-at-home policy for all residents unless permitted; widespread temperature and symptom monitoring; and universal screening and reporting. With these added measures the basic reproductive number fell to 0.32, and the epidemic subsided. The interventions were estimated to prevent 94.5% (93.7 to 95.2%) of infections until February 18.

A recent modeling exercise reported from Imperial College London10 examined the effectiveness of different social distancing strategies to mitigate or suppress the force of the epidemic in the United Kingdom and the United States. The overall conclusion is that population-wide social distancing in combination with home isolation of cases, quarantine of exposed individuals, and school and university closure could reduce the incidence of new cases (suppress) and not merely slow the rise (mitigate). However, to avoid the re-emergence of the disease, their models indicate these interventions would need to be maintained until an effective vaccine is developed and deployed, and this could take 18 months or longer. The authors stress uncertainty in estimates of transmissibility and effectiveness of interventions. They acknowledge the practical possibility of shorter-term interventions and variation across geographies depending on the local stage of the outbreak. Their analysis suggests that a 3-month period of intervention, stressing social distancing of vulnerable (older or chronically ill) populations in combination with other measures could reduce deaths in half and peak health care demand by two-thirds. At the same time, half-measures, such as case isolation and social distancing of the elderly only (rather than the entire population), could lead to an epidemic that overwhelms hospital surge capacity and, they project, could cause more than 1 million deaths in the United States.

Anecdotally, Singapore, which after the experience of the SARS outbreak in 2002 refined its capacity for intensive detection, isolation of cases, contact tracing, and quarantine of exposed individuals, has managed to suppress the SARS-CoV-2 epidemic without resorting as yet to closing schools and workplaces. These results are possible only with the availability of widespread diagnostic testing. The continued influx of new cases, probably related to travel, creates an ongoing challenge for the public health authorities there.

In the United States, we are embarked on a natural experiment where different communities will likely enact different levels and timing of social distancing relative to the local phase of the epidemic. Experience in other countries during the current COVID-19 pandemic shows the value of widely available diagnostic testing to guide the response. If our nation mounts a coordinated effort to detect and monitor disease incidence and tracks the control measures that are being implemented in each community, compliance rates, and other relevant data, we can better inform decisions about when social distancing measures may be withdrawn and in what circumstances they may need to be reinstated or enlarged. Judgments about when to suspend which social distancing measures will be critical and should involve discussions with public health experts, mathematical modelers, economists, and social and behavioral scientists. Decision makers will be greatly aided by ongoing data collection and disease monitoring.

My colleagues and I hope this rapid expert consultation is helpful to you as you continue to guide the nation’s response in this ongoing public health crisis.

This activity was supported by a contract between the National Academy of Sciences and the U.S. Department of Health and Human Services’ Office of the Assistant Secretary for Preparedness and Response (75A50120C00093). Any opinions, findings, conclusions, or recommendations expressed in this publication do not necessarily reflect the views of any organization or agency that provided support for the project.

Rapid Expert Consultation on Social Distancing for the COVID-19 Pandemic (March 19, 2020) Get This Book
× 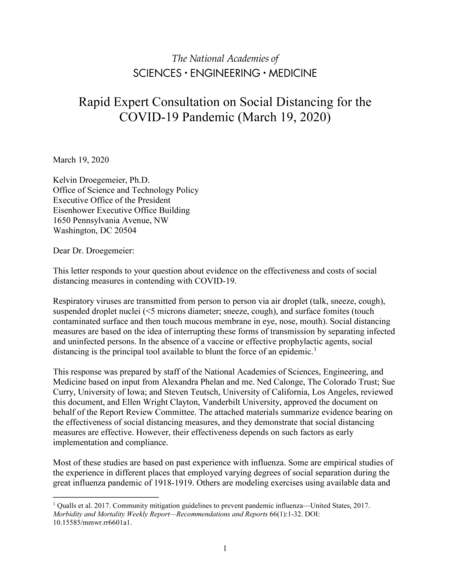 This rapid expert consultation responds to a request from the Office of Science and Technology Policy (OSTP) concerning the effectiveness and costs of social distancing measures in contending with COVID-19.