Crisis Standards of Care: Ten Years of Successes and Challenges: Proceedings of a Workshop (2021)

Get This Book
Visit NAP.edu/10766 to get more information about this book, to buy it in print, or to download it as a free PDF.
« Previous: Front Matter
Page 1 Share Cite
Suggested Citation:"1 Introduction." National Academies of Sciences, Engineering, and Medicine. 2021. Crisis Standards of Care: Ten Years of Successes and Challenges: Proceedings of a Workshop. Washington, DC: The National Academies Press. doi: 10.17226/25767.
×

In 2009, in response to a request from the Assistant Secretary for Preparedness and Response (ASPR), the Institute of Medicine (IOM)1 began to assess the need for better defined medical and public health crisis standards of care (CSC) for catastrophic disasters and public health emergencies. The pandemic caused by the H1N1 virus that same year became a real-life example of the scarce-resource situations that can result in these scenarios. The first product released, Guidance for Establishing Crisis Standards of Care for Use in Disaster Situations: A Letter Report (IOM, 2009), articulated concepts and guidance that can assist professionals in the development of systematic and comprehensive policies and protocols for these types of situations. In 2012, a new committee took this work a step further and defined templates for those stakeholders responsible for integrated CSC planning and implementation (IOM, 2012b). To make these concepts and principles both more actionable and easier to use at the state and local levels, a third committee released a report in 2013 in the form of a toolkit with guidance on indicators and triggers (IOM, 2013a). It also provided a discussion kit for stakeholders to use with their own communities to establish appropriate indicators and triggers to guide their planning.

Over the years since the first report’s release, there have been multiple meetings, exercises, and additional reports, both disseminating the mes-

1 As of March 15, 2016, the Health and Medicine Division continues the consensus studies and convening activities previously undertaken by the Institute of Medicine (IOM). Publications released prior to this change are cited to the IOM in perpetuity, but all subsequent publications are branded under the National Academies of Sciences, Engineering, and Medicine.

sages and key concepts and building on the initial efforts to refine certain elements and address remaining gaps. A series of regional workshops in 2009 assessed the work already being done at the state and local levels on CSC (IOM, 2010). A workshop in 2011 explored barriers to integrating these concepts into international disaster response plans (IOM, 2012a), and a session at the 2013 Preparedness Summit explored the challenges of engaging the public in this type of catastrophe planning (IOM, 2013b). In addition to the work at the national level, there has also been action at the state and local levels, led by Illinois; Minnesota; Harris County, Texas; and others. This current Proceedings of a Workshop captures the discussions from a 2019 workshop reviewing the successes and gaps over the past 10 years of CSC work, in order to inform the next phases of planning and implementation.

Dan Hanfling, vice president of technical staff at In-Q-Tel, presented attendees with a history of CSC, looking back on the past 10 years of planning and at the broader picture of disasters over the past century. Only a handful of events between the 19th and 20th centuries caused catastrophes, and between the 1920s and 2001 there was no single event that caused a large-scale catastrophe. So, the mindset for planners was that these types of destructive disasters happened “elsewhere,” Hanfling said. Yet, in the span of just a few years, the United States was forced to respond to the 9/11 attacks in 2001 and Hurricane Katrina in 2005, and preparedness professionals suddenly had to learn to manage large-scale events with difficult decisions on how to save lives under austere conditions.

While this effort has continued to be a work in progress, Hanfling noted that the process has given the community a methodology for thinking through these difficult and sometimes overwhelming issues. It is not just duck and cover and hide in your basement, he joked; we can actually be proactive as planners and have a positive impact. The fallout and consequences from Hurricane Katrina in 2005 in the health care setting truly demonstrated the need to get the planning right. The first effort on language for these concepts came from Sally Phillips in 2007 during her time at the Agency for Healthcare Research and Quality when she described catastrophic mass-casualty events (see Figure 1-1).

This was the first time someone articulated the concept that health care may have to be rationed in a disaster—a concept typically not thought of in the United States. Some of those affected in a disaster would be too sick to survive while others would be too well to warrant emergency care, but all would be seeking care that drains available resources unnecessarily. “Our system in 2019 is breaking under that strain. We are barely able to

deliver services using available resources on a good day, let alone during a disaster,” Hanfling said. Regarding the emergence of H1N1 in 2009, Nicole Lurie from ASPR highlighted important questions about who would receive care or treatment with limited resources and how that would change under different circumstances. These were the initial questions posed to the IOM, which became the advent of this decades-long exploration of CSC. Hanfling explained that while the practice community still does not have definitive answers, there has been tremendous progress. Hanfling also discussed the utility of language and schema when thinking about surge capacity planning, giving credit to John Hick of Hennepin County, Minnesota. The terms of conventional, contingency, and crisis phases of surge capacity introduced nuances to planning that had not previously been considered. We always thought of surge as a binary concept, he explained; you were either in surge, or not. But this new continuum reflects the available standard of care, given the conditions in which you are practicing. As codified in the 2009 letter report, Hanfling said that the definition of CSC is a “substantial change in usual health care operations and the level of care possible to deliver, which is made necessary by a pervasive (e.g., pandemic influence) or catastrophic (e.g., earthquake, hurricane) disaster” (IOM, 2009, p. 3). Simple supply- and-demand economics demonstrates a way to describe what happens when shifting along the conventional, contingency, and crisis continuums (see Figure 1-2).

“We have dealt with more than a decade of disasters since 2009,” Hanfling remarked, “but the 2014–2015 Ebola crisis really drove home the consideration that these planning principles need to be woven into the global health setting, not just in the United States.” Quickly following that were back-to-back Hurricanes Harvey and Maria in 2017, which emphasized the criticality of resource constraints and allocation as many federal assets were stretched thin and unable to respond everywhere. Hanfling concluded that all of these have an element of CSC planning that is worthy of continued exploration, concluding “If the model of the Lincoln Memorial as a framework still holds true, there is work still to be done.”

On November 21–22, 2019, the Forum on Medical and Public Health Preparedness for Disasters and Emergencies held a workshop titled Crisis Standards of Care: Ten Years of Successes and Challenges. Participants from across sectors explored the evolution and implementation of CSC planning since the publication of the 2009 IOM report. Detailed workshop objectives included

This proceedings is organized into five chapters. Following this introductory chapter, Chapter 2 focuses on informing the next stage of CSC, with discussion on terminology use, the importance of legal frameworks, and future opportunities. Chapter 3 presents the critical ethical and legal considerations for jurisdictions, as well as issues that have ethical consensus at this point in the national landscape. Chapter 4 describes various case study examples of CSC application at the federal and state levels, as well as clinical and other operational settings. Finally, Chapter 5 presents challenges and potential steps needed for implementing CSC across a range of sectors in order to continue to advance this process. 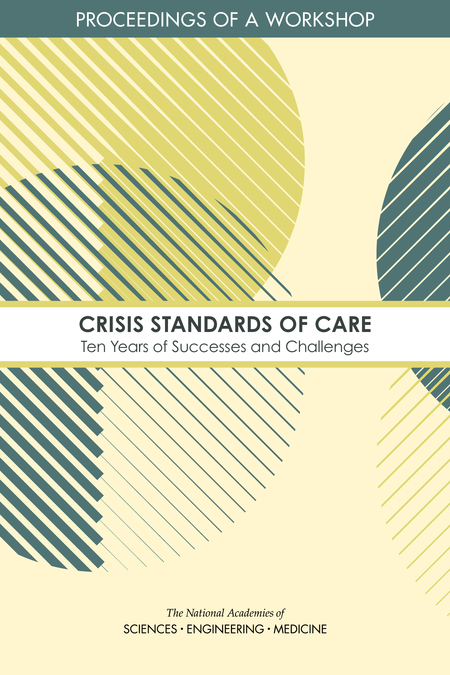 In 2009 the Institute of Medicine (IOM) began to assess the need for better-defined medical and public health crisis standards of care (CSC) for catastrophic disasters and public health emergencies. Over the next 10 years, the IOM defined templates for those stakeholders responsible for integrated CSC planning and implementation; created a tool kit with guidance on indicators and triggers; provided a discussion kit for stakeholders to use with their own communities to establish appropriate indicators and triggers to guide their planning; disseminated the messages and key concepts of CSC; and built on the initial efforts to refine certain elements and address remaining gaps. This current Proceedings of a Workshop captures the discussions from a 2019 workshop reviewing the successes and gaps over the last 10 years of CSC work, in order to inform the next phases of planning and implementation.