Rapid Expert Consultation on the Possibility of Bioaerosol Spread of SARS-CoV-2 for the COVID-19 Pandemic (April 1, 2020) (2020)

Get This Book
Visit NAP.edu/10766 to get more information about this book, to buy it in print, or to download it as a free PDF.
Page 1 Share Cite
Suggested Citation:"Rapid Expert Consultation." National Academies of Sciences, Engineering, and Medicine. 2020. Rapid Expert Consultation on the Possibility of Bioaerosol Spread of SARS-CoV-2 for the COVID-19 Pandemic (April 1, 2020). Washington, DC: The National Academies Press. doi: 10.17226/25769.
×

Rapid Expert Consultation on the Possibility of Bioaerosol Spread of SARS-CoV-2 for the COVID-19 Pandemic (April 1, 2020)

Executive Office of the President

This letter responds to your question concerning the possibility that SARS-CoV-2 could be spread by conversation, in addition to sneeze/cough-induced droplets.

Currently available research supports the possibility that SARS-CoV-2 could be spread via bioaerosols generated directly by patients’ exhalation. One must be cautious in imputing the findings with one respiratory virus to another respiratory virus, as each virus may have its own effective infectious inoculum and distinct aerosolization characteristics. Studies that rely on polymerase chain reaction (PCR) to detect the presence of viral RNA may not represent viable virus in sufficient amounts to produce infection. Nevertheless, the presence of viral RNA in air droplets and aerosols indicates the possibility of viral transmission via these routes.

A recent study of SARS-CoV-2 aerosolization at the University of Nebraska Medical Center showed widespread presence of viral RNA in isolation rooms where patients with SARS-CoV-2 were receiving care. Santarpia et al. collected air and surface samples from 11 isolation rooms that were used to care for patients infected with SARS-CoV-2. Included in that study were both high volume air samples and low volume personal air samples. Of note, air collectors positioned more than 6 feet from each of two patients yielded samples positive for viral RNA when evaluated using reverse-transcriptase PCR (RT-PCR), as did air samplers placed outside patient rooms in the hallways. Personal collectors worn by samplers also were positive even though patients were not coughing while samplers were present. Anecdotally, the highest airborne RNA concentrations were recorded by personal samplers while a patient was receiving oxygen through a nasal cannula (19.17 and 48.21 copies/L). While this research indicates that viral particles can be spread via bioaerosols, the authors stated that finding infectious virus has proved elusive and

experiments are ongoing to determine viral activity in the collected samples.1

An airflow modeling study following the SARS-CoV-1 outbreak in Hong Kong in the early 2000s supports the potential for transmission via bioaerosols. In that study, the significantly increased risk of infection to residents on higher floors of a building that was home to an infected individual indicated to the researchers a pattern of infection consistent with a rising plume of contaminated warm air.2

A study of SARS-CoV-2 raises concerns about transmission via aerosols generated from droplet contaminated surfaces. Liu et al. collected 35 aerosol samples in 2 hospitals and public areas in Wuhan. From samples collected in patient care areas the highest concentration of the virus was found in toilet facilities (19 copies m–3), and in medical staff areas the highest concentrations were identified in personal protective equipment (PPE) removal rooms (18-42 copies m–3). By comparison, in all but two crowded sites, the concentrations of the virus found in public areas was below 3 copies m–3. The authors conclude that a direct source of SARS-CoV-2 may be a virus-laden aerosol resuspended by the doffing of PPE, the cleaning of floors, or the movement of staff.4 It may be difficult to resuspend particles of a respirable size. However, fomites could be transmitted to the hands, mouth, nose, or eyes without requiring direct respiration into the lungs.

Individuals vary in the degree to which they produce bioaerosols through normal breathing.5 This may have a bearing on efficiency of transmission of SARS-CoV-2 by different infected but asymptomatic individuals.

Additional research specific to the aerosolization of SARS-CoV-2 during breathing and speech, the behavior of SARS-CoV-2 containing aerosols in the environment, both from laboratory studies and clinical experience, and the infectivity of bioaerosols containing SARS-CoV-2,

would provide a more complete understanding of the level of risk of transmission of SARS-CoV2 via bioaerosols spread by exhalation and normal speech. However, for no respiratory virus is the exact proportion of infections due to air droplet, aerosol, or fomite transmission fully established, and many individual factors and situations may contribute to the importance of each route of transmission.

While the current SARS-CoV-2 specific research is limited, the results of available studies are consistent with aerosolization of virus from normal breathing.

This response was prepared by staff of the National Academies of Sciences, Engineering, and Medicine based on a rapid review of the available literature and input from me. Georges Benjamin, American Public Health Association, and Ed Nardell, Harvard University, contributed to this response. Bobbie Berkowitz, Columbia University School of Nursing, and Ellen Wright Clayton, Vanderbilt University Medical University, reviewed and approved this document on behalf of the National Academies’ Report Review Committee and their Health and Medicine Division.

My colleagues and I hope this input is helpful to you as you continue to guide the nation’s response in this ongoing public health crisis.

This activity was supported by a contract between the National Academy of Sciences and the U.S. Department of Health and Human Services’ Office of the Assistant Secretary for Preparedness and Response (75A50120C00093). Any opinions, findings, conclusions, or recommendations expressed in this publication do not necessarily reflect the views of any organization or agency that provided support for the project.

Rapid Expert Consultation on the Possibility of Bioaerosol Spread of SARS-CoV-2 for the COVID-19 Pandemic (April 1, 2020) Get This Book
× 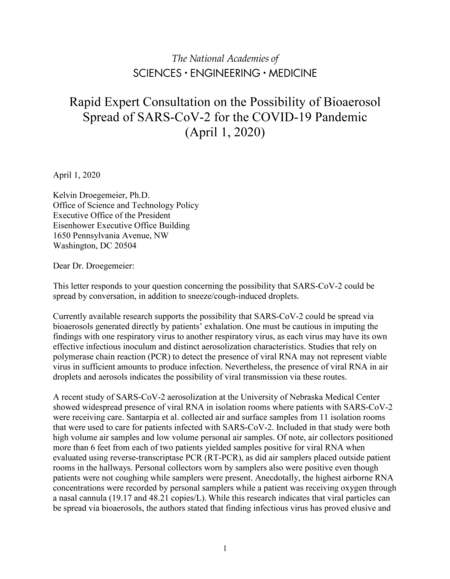 This rapid expert consultation responds to a request from the Office of Science and Technology Policy (OSTP) concerning the possibility that the SARS-CoV-2 virus could be spread by conversation, in addition to sneeze/cough-induced droplets.