A Population Health Perspective on Middle School Success: Activities, Programs, and Policies: Proceedings of a Workshop (2021)

Get This Book
Visit NAP.edu/10766 to get more information about this book, to buy it in print, or to download it as a free PDF.
« Previous: 4 Multisector Support for the Middle School Experience
Page 45 Share Cite
Suggested Citation:"5 The Big Picture." National Academies of Sciences, Engineering, and Medicine. 2021. A Population Health Perspective on Middle School Success: Activities, Programs, and Policies: Proceedings of a Workshop. Washington, DC: The National Academies Press. doi: 10.17226/25807.
×

Moderator Joaquin Tamayo introduced the last panel, giving an overview of some key takeaways. The panel featured presenters who shared their experiences on defining and supporting middle school success: Linda Pulido-Esquivel of Oakland Unified School District, Christine Thielen of the Association for Middle Level Education Board of Trustees and Lincoln Middle School, and Nancy Deutsch of the University of Virginia (UVA).

Linda Pulido-Esquivel first described the organizational structure of her district. It has divided its schools into networks, including three elementary school networks, a middle school network, and a high school network. Pulido-Esquivel is on the middle schools network team, along with the superintendent. She explained that this network contains 12 middle schools and aims to ensure that students, families, teachers, and staff have what they need to be successful, including access to computers, science, technology, engineering, arts, and mathematics resources, as well as outdoor education and the restorative justice program directed by Gibson, an earlier workshop presenter.

As part of her role within the network, Pulido-Esquivel manages the Measure G1 Districtwide Teacher Retention and Middle School Improvement Act, passed in 2016, with the goal of supporting teacher retention

1 This section summarizes information presented by Linda Pulido-Esquivel of Oakland Unified School District, Christine Thielen of the Association for Middle Level Education Board of Trustees and Lincoln Middle School, and Nancy Deutsch of UVA. The statements made are not endorsed or verified by the National Academies of Sciences, Engineering, and Medicine.

and middle school electives (Oakland Unified School District, 2020). She described the act as a $120 annual parcel tax received from the county that approximately totaled $11.6 million, of which $11.4 million was distributed to schools. Within that, about 65 percent was directed to staff and teacher retention, with the rest being used for middle school electives. She continued by describing the large turnover rate and lack of livable wages for teachers. Pulido-Esquivel stated that district teachers, on average, earn $10,000 less compared to other county districts and that first-year teacher retention rates are 67 percent, dropping to 36 percent by year 3, compared to elementary school teacher retention rates of 81 and 61 percent, respectively. Hoping to address these concerns, she concluded by saying that the parcel tax has already created growth in areas such as safety, mental health, art, and music programs.

Next to present was Christine Thielen, who teaches mathematics at Lincoln Middle School in Parkridge, Illinois. She is on the board of trustees for the Association for Middle Level Education (AMLE), whose goal is to empower educators to create opportunities to cultivate the potential of young adolescents (AMLE, 2020). Thielen explained that AMLE is funded through individual, school membership, and professional development fees and offers technical assistance and services in schools, which also provides some funding. She described AMLE as a resource for educators by disseminating action research and best practices to aid them in meeting students’ needs. AMLE focuses on social equity and fostering culturally relevant learning environments (AMLE, 2020). She stated that AMLE sees the middle school years as a unique opportunity for developing “healthful decision-making and refusal skills” to avoid risky behaviors.

Thielen then went on to describe a connectedness survey that Lincoln employs each year, which asks students to identify teachers or staff who have shown an investment in them and whom they can talk to about various academic and nonacademic problems. Thielen shared that the guidance department then reviews the results to look for students who have selected no one or only one adult. These students are provided with additional support in an effort to build relationships with them.

Following Thielen was Nancy Deutsch, professor at UVA and director of Youth-Nex, who concluded the panel. She remembered that she had a positive middle school experience and briefly shared that she was in “an experimental open cluster” setting in which there were no walls and only one classroom with a team of teachers and the same peer group. She then described Youth-Nex, which is a multidisciplinary and university-based center aimed at “enhancing the strengths of children and adolescents” (UVA, 2020). She prided the organization for including children and adolescents in its decision-making processes and its advocacy for working directly with them. She listed the organization’s three areas of

focus: middle school educational systems, school time environments, and community engagement. Since taking over as director 2 years ago, Deutsch has moved Youth-Nex in the direction of translational research and practices and engaging with community partners. She also questioned whether the decline in student engagement2 and academic achievement during middle school can be pinned not on the developmental period, but instead on settings that may not be structured to adequately meet the students’ needs (Rosenkranz et al., 2014). For example, middle schools receive significantly less funding than elementary, high, and post-secondary schools (see Figure 5-1).

Deutsch then continued to describe Remaking Middle School, a nationwide and multisector program housed within Youth-Nex aimed at using innovative practices, fostering collaboration, and building an online resource repository connecting educators and researchers to promote the learning of young adolescents. Its commitment is to elevate the importance of middle school and realize its promise for all students, highlight and disseminate existing research that the education field can use to ensure middle school better aligns with youths’ developmental needs, and establish the conditions for adults in the classroom and school building to shape educational experiences that elevate our youths’ strengths (UVA, 2020). Deutsch then described the three design teams aimed at implementing these intentions. One team focuses on connecting research and practice, the second on teacher learning and professional development, and the third on school climate and culture. These foci were identified by participants in a summit held by Youth-Nex in early 2019. Deutsch then concluded her presentation by showing the future goal of Remaking Middle School: developing a design lab to work directly with individual schools on determining how to improve practices and structures identified by each school (UVA, 2020).

A brief discussion and question-and-answer session with the audience immediately followed the presentations. Joaquin Tamayo summarized presenters’ points on the need to base practices and structures around evidence-based information and recognize the assets found within middle school students. He asked how to keep this trajectory moving forward without regressing. Deutsch responded by saying that adults need to follow suit. That is, she explained, young people tend to be social advo-

cates and the faces of many social movements. She believes that adults need to listen to young people and follow their example. Language on the middle school years may be reframed more positively, to which Thielen and Pulido-Esquivel agreed. Pulido-Esquivel added that they started to interview their middle school students in a campaign called “Oakland in the Middle” to get to know them and the contributions they might offer. She also mentioned the Search Institute in Minneapolis, Minnesota, which uses a model to evaluate individual and ecological assets (the resources and strengths of individual youth) within their communities.

Bobby Milstein of ReThink Health asked the panelists about their observations on how middle school students relate to younger and older students. Deutsch shared that she had conducted research with the Boys & Girls Club and found that when older children and adolescents were around younger children, they saw themselves as role models.

Cathy Baase of the Michigan Health Improvement Alliance directed her comment about the origins of the G1 parcel tax to Pulido-Esquivel, to which the latter explained that the parcel tax narrowly passed after a time of financial instability. It had been argued that middle schools did

not have similar resources to elementary schools, such as Parent Teacher Associations, and were having to reduce their programs dramatically.

Hanh Cao Yu, chief learning officer at The California Endowment, asked if the panelists would share examples in which the community and young people were taking leadership roles in how middle schools were being transformed. Deutsch mentioned a communitywide initiative that included a youth participatory action research component in Broward County, Florida, but she was unable to provide further details. She did continue by briefly describing student movements advocating for equity and on issues of segregation in New York City public schools. A participant contributed an example from the University of Arizona, in which there is youth participatory action research and youth informing the curriculum.

Next: 6 Reflections on the Day and Closing Remarks »
A Population Health Perspective on Middle School Success: Activities, Programs, and Policies: Proceedings of a Workshop Get This Book
× 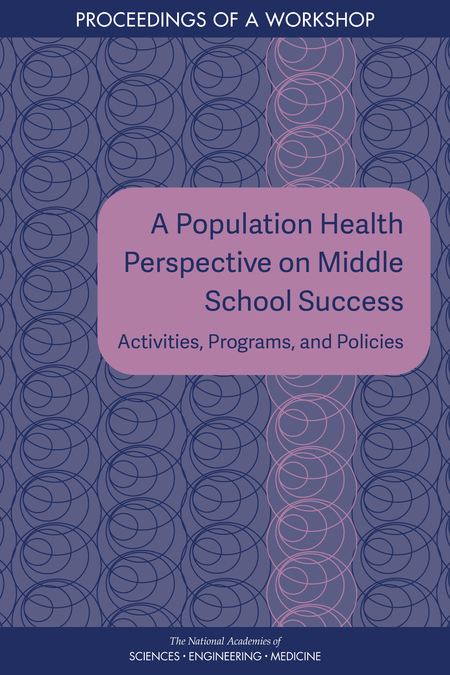 On December 5, 2019, the Roundtable on Population Health Improvement of the National Academies of Sciences, Engineering, and Medicine convened a workshop to explore the factors that affect the health and well-being of middle-school-aged adolescents. The workshop included presentations on the risk factors of poor physical, social, and emotional outcomes and their prevalence; the identification of resilience factors; current policies and programs designed to support middle school success and address issues of equity and financing as they apply to these; and how the health and human services sectors can support and align with the education sector to promote health and well-being in middle school. This publication summarizes the presentations and discussions that took place during the workshop.