Proposed Practice for Validating Contractor Test Data 65 3.44 Studentâs t distributionâa family of continuous sampling distributions employed in small sampling theory where the standard deviation is unknown. 3.45 validationâthe mathematical comparison of two independently obtained sets of data (e.g., SHA data versus Contractor data) to determine whether it can be assumed they came from the same population. Some references define validation as the process of verifying the soundness or effectiveness of a product (such as a model, a program, or specifications) thereby indicating official sanction. 3.46 variance ( )âa statistical measure of the dispersion of a population or a set of data. An unbiased measure of the dispersion of a set of data around its mean, calculated as the sum of the squares of the deviations from the mean of the results divided by the number of observations minus one. Variance is equal to the standard deviation squared. 3.47 verificationâthe process of determining or testing the truth or accuracy of test results by examining the data and/or providing objective evidence. Verification may be part of an Independent Assurance (IA) program or part of an acceptance program. 4. PROCEDURES AND GUIDELINES FOR VALIDATING CONTRACTOR TEST DATA 4.1 This practice refers to validation as the documented process used by a SHA to assess the reliability of Contractor data used to determine how well a material or construction meets the SHAâs project specification for acceptance. Validation is a required part of a SHAâs QA program when results from Contractor testing are used in acceptance decisions. 4.1.1 Acceptance decisions for a material or construction must be evaluated on a lot by lot basis as defined in the SHAâs QA program. 4.1.2 The acceptance quality characteristics (AQCs) that are used to determine acceptability (i.e., compliance with the specifications) must be relevant to performance, encourage quality, and if multiple AQCs are used, they must not be interdependent such that there is a strong chance of double-jeopardy, that is, failing of one AQC also results in failing of another. For example, asphalt paving mixtures are often accepted based on asphalt content, extracted gradation, laboratory compacted air void content, and voids in the mineral aggregate (VMA). There are strong inter-relationships among these properties which increases the probability of additive penalties. Criteria for acceptance (i.e., specification limits) must be based on achievable limits. Each AQC for the lot of material must be evaluated independently. For example, if the materialâs acceptance is determined based on a composite pay factor using four measured AQCs, then each AQC must be validated.

66 Procedures and Guidelines for Validating Contractor Test Data 4.1.3 Samples obtained for validation of Contractor results must be taken independent of those samples taken by the Contractor for acceptance testing. 4.1.4 The SHA must establish procedures regarding the security of samples (i.e., chain of custody) for materials samples to be used in validation and dispute resolution testing. 4.2 The ability of the validation procedure to identify potential differences between SHA and Contractor test results depends on the SHAâs selected level of significance and the number of test results (samples) that are being compared. The greater the number of test results from each set, the greater the ability of the comparison procedure to identify statistically valid differences. Using a single SHA sample to validate Contractor results is not valid since no measure of variability can be obtained from the single SHA sample. 4.3 Overview of the Validation Process 4.3.1 Figure 1 illustrates use of the validation process within a SHAâs acceptance plan for determining whether or not Contractor results should be used in acceptance or calculation of pay for a lot of material or construction item. Validation includes comparisons of test results from the SHA and the Contractor using formal statistical procedures that are simple to apply. A relevant detail is the 23 CFR 637B requirement of independent samples. Since test results from independent samples include three sources of variation, namely materials variability, sampling variability, and testing variability, it can be challenging to determine if results obtained by a SHA and a Contractor from the same lot are statistically different. This practice recommends an additional step for validation that compares results from multiple split samples. Further discussion is presented later in this practice. Annex A presents two example sampling and testing plans with efficient validation processes that utilize both independent and split samples.

68 Procedures and Guidelines for Validating Contractor Test Data used to judge whether the SHA results or the Contractor results are better estimates of the population when significant differences between those results are evident. 4.3.3 Sampling and Testing â The goal of sampling as part of a QA program is to obtain a suitable number of small but representative portions of the lot that are of sufficient size to conduct tests of the AQCs for determining specification compliance. Materials for such purposes must be obtained in a random manner and in accordance with the appropriate standards such as AASHTO R 60, R 90, T 23, and T 168. In order to adequately represent the lot, multiple samples are needed to estimate the AQCâs central tendency (i.e., mean) and dispersion (i.e., variability) within the lot. A minimum of three SHA results are needed to validate Contractor data. A fundamental truth of statistics is that having more samples provides better estimates of the population and having better estimates reduces the risks to both SHAs and Contractors. However, increasing the number of samples increases the cost for assessing the productâs quality and thus the cost of making the product. In general, the frequency of testing should be set to achieve a balance between the total cost for completed set of AQCs and risks associated with pay penalties and accepting poor quality materials and construction. 4.4 Description of Validation Steps 4.4.1 Testing of Replicates - As part of normal sampling and testing practices, all organizations that conduct tests for quality control, acceptance, validation, and Independent Assurance should consider the value of conducting replicate tests for each AQC on each sample and comparing the replicate results to the single-operator acceptable range, i.e., Difference Two-Sigma (D2S), in the precision statement of the given test method. This practice is a worthwhile check on individual data points and will help identify procedural errors and variations that may affect subsequent steps in the acceptance decision process. 4.4.2 Dealing with Outliers - Contractor and SHA data sets should be evaluated for potential outlier observations using an established statistically valid method such as ASTM E 178 Standard Practice for Dealing with Outlying Observations. This practice describes several methods for determining if one or more observations are markedly different from other observations in the same data set and allows the user to select the level of significance for determining critical values. A simple approach for identifying outliers in small data sets of materials test results developed by Maine Department of Transportation on the basis of the ASTM procedure is provided in Annex B. Possible causes for erroneous results include mishandling of the sample prior to testing, failure to properly follow the test method, malfunction of test equipment, errors in recording measurements, or computation errors. It is

Next: Annex A - Recommended Sampling Plans »
Procedures and Guidelines for Validating Contractor Test Data Get This Book
× 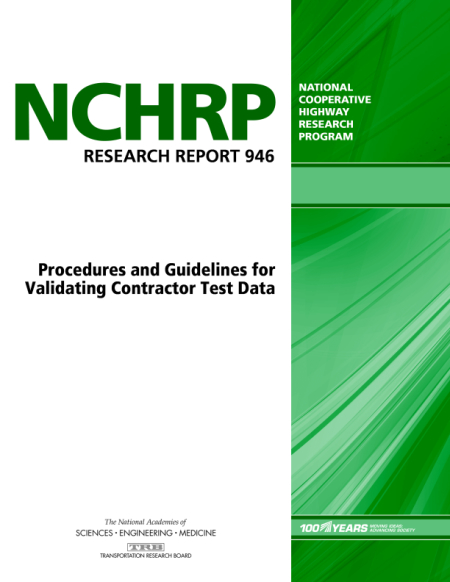 In the development of a quality assurance program, a state highway agency (SHA) incorporates policies and procedures for assessing how well the materials and construction used by a contractor on a construction project satisfy the agency's specifications.

The TRB National Cooperative Highway Research Program's NCHRP Research Report 946: Procedures and Guidelines for Validating Contractor Test Data reviews and evaluates the procedures and practices used in the acceptance of construction materials. The report also proposes a related practice for incorporation into AASHTO Standard Specifications for Transportation Materials and Methods of Sampling and Testing.