Get This Book
Visit NAP.edu/10766 to get more information about this book, to buy it in print, or to download it as a free PDF.
« Previous: 5 Challenges and Opportunities for Advancing the Understanding of Respiratory Health Issues in Southwest Asia Theater Veterans
Page 235 Share Cite
Suggested Citation:"Appendix A: Public Meeting Agendas." National Academies of Sciences, Engineering, and Medicine. 2020. Respiratory Health Effects of Airborne Hazards Exposures in the Southwest Asia Theater of Military Operations. Washington, DC: The National Academies Press. doi: 10.17226/25837.
×

Next: Appendix B: National Academies Reports Related to Gulf Theater Veterans' Health »
Respiratory Health Effects of Airborne Hazards Exposures in the Southwest Asia Theater of Military Operations Get This Book
× 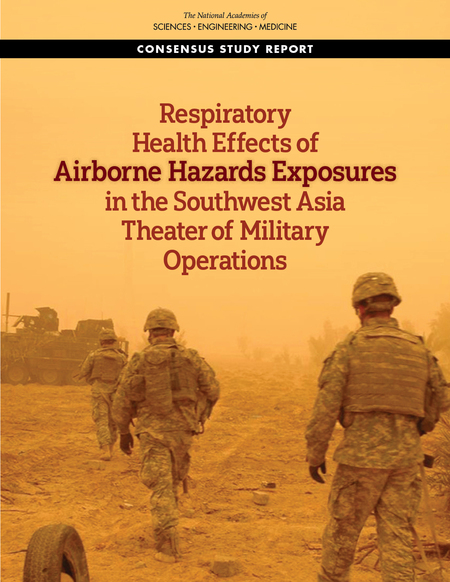 More than 3.7 million U.S. service members have participated in operations taking place in the Southwest Asia Theater of Military Operations since 1990. These operations include the 1990-1991 Persian Gulf War, a post-war stabilization period spanning 1992 through September 2001, and the campaigns undertaken in the wake of the September 11, 2001, attacks. Deployment to Iraq, Kuwait, Saudi Arabia, Bahrain, Gulf of Aden, Gulf of Oman, Oman, Qatar, the United Arab Emirates, and Afghanistan exposed service members to a number of airborne hazards, including oil-well fire smoke, emissions from open burn pits, dust and sand suspended in the air, and exhaust from diesel vehicles. The effects of these were compounded by stressors like excessive heat and noise that are inevitable attributes of service in a combat environment.

Respiratory Health Effects of Airborne Hazards Exposures in the Southwest Asia Theater of Military Operations reviews the scientific evidence regarding respiratory health outcomes in veterans of the Southwest Asia conflicts and identifies research that could feasibly be conducted to address outstanding questions and generate answers, newly emerging technologies that could aid in these efforts, and organizations that the Veterans Administration might partner with to accomplish this work.