Principles and Practices for a Federal Statistical Agency: Seventh Edition (2021)

Chapter:PRINCIPLE 4: Independence from Political and Other Undue External Influence

Get This Book
Visit NAP.edu/10766 to get more information about this book, to buy it in print, or to download it as a free PDF.
« Previous: PRINCIPLE 3: Trust Among the Public and Data Providers
Page 39 Share Cite
Suggested Citation:"PRINCIPLE 4: Independence from Political and Other Undue External Influence." National Academies of Sciences, Engineering, and Medicine. 2021. Principles and Practices for a Federal Statistical Agency: Seventh Edition. Washington, DC: The National Academies Press. doi: 10.17226/25885.
×

Independence from Political and Other Undue External Influence

Federal statistical agencies must be independent from political and other undue external influence in developing, producing, and disseminating statistics.

A statistical agency must be impartial and execute its mission without being subject to pressures to advance any political or personal agenda. It must avoid even the appearance that its collection, analysis, or reporting processes might be manipulated for political or other purposes. Only in this way can a statistical agency serve as a trustworthy source of objective, relevant, accurate, and timely information (Habermann and Louis, 2020).4

Statistical agencies and the statistical data they produce can play a key role in informing policy makers, but they are not and should not be responsible for developing or implementing policy (see Practice 1). For this reason, statistical agencies should be distinct from units of a larger department that carry out administrative, regulatory, law enforcement, or policy-making activities. It is also essential that a statistical agency be independent of other undue external influence in developing, producing, and disseminating statistics. “Undue external influences” are those from outside the agency that seek to undermine its impartiality, nonpartisanship, or professional judgment. Independence from any undue outside influence fosters trust among data providers and credibility with data users.

To fulfill this principle, a statistical agency must have the necessary authority and support to protect its independence (see Practice 2);

4 See United Nations Fundamental Principles of Official Statistics and the Common Quality Framework of the European Statistical System in Appendix C, and OMB Statistical Policy Directive No. 1 in Appendix A.

however, a broad view of this authority is needed. Statistical agencies exist in a complex ecosystem and are governed by their legislative authority, which may give ultimate responsibility for the activities of the agency to the secretary of the department, as well as by the Office of Management and Budget (OMB) and congressional committees. Within this broad framework, a statistical agency has to maintain its credibility as an impartial purveyor of information (Habermann and Louis, 2020).

There are some structural ways that statistical agencies are authorized that can help promote their independence from political or other undue external influences. For the head of an agency, independence and protection from undue political influence can be strengthened by the method of the person’s appointment. A method widely regarded as bolstering the professional independence of an agency head is appointment by the President with confirmation by the Senate for a fixed term and with a statutory requirement that the appointee be selected with appropriate professional qualifications, as is the case for the commissioner of the Bureau of Labor Statistics (BLS) and the director of the U.S. Census Bureau.5 It may also be desirable that the term not coincide with the presidential term to better ensure that professional criteria, rather than political ones, guide the appointment process. Appointment by the President with Senate confirmation for a term that is at the pleasure of the President, as is the case for the head of the Energy Information Administration (EIA), provides less assurance of independence (however, it is worth noting that EIA does have other strong legislative protection for the authority of its administrator). Appointment of a qualified career civil servant as the head of an agency is another method considered helpful for maintaining the independence of a statistical agency.6

influence. Such access allows the head to inform new secretaries about the role of their statistical agency and to directly present the case for new or changed statistical initiatives. Such direct access currently is provided by legislation for BLS and EIA. Other statistical agencies have one or more layers of departmental management between the statistical agency head and the secretary (see Figure B-1 in Appendix B). Over time there has been an increase in the “layering of statistical agencies,” that is, positioning them lower in their department’s administrative structure, a trend that the National Research Council (2009a, p. 226) has identified as “a subtle, but increasingly common” threat to independence because it increases the number of political appointees and career staff who could seek to exercise control over the agency without transparency to external stakeholders or users.

Another means to protect against political and other undue external interference is for the statistical agency to have its own funding appropriation from Congress separate from that for other departmental agencies or programs. This provides greater visibility and accountability to Congress, both by the agency and by its department. Other funding arrangements, such as the statistical agency being completely dependent on allocations from the budget of its parent department or agency, risk giving the department too much unchecked leverage over the statistical agency without transparency to external stakeholders and users, and potentially compromising its ability to fulfill its mission.

A key aspect of a federal statistical agency’s mission is its ability to release its statistical products without review or approval by policy officials outside the statistical agency (see Practice 2). Some agencies have this authority spelled out in statute, while others have departmental policies that support it. OMB provides governmentwide protocols and assurances on the release of key federal statistics and publishes in advance a release calendar for the entire year for Principal Federal Economic Indicators.7 A strong internal and external evaluation program (see Practice 6) can also help ensure that all agency statistical programs are adhering to standard procedures and are not manipulated.

In the long run, the effectiveness of an agency depends on its reputation for impartiality: thus, an agency must be continually alert to possible infringements on its credibility and be prepared to strenuously

7 See OMB’s Statistical Policy Directives No. 3 and 4 in Appendix A.

resist such infringements. OMB has stated that it is also the responsibility of the statistical agency’s department to “enable, support, and facilitate federal statistical agencies and recognized statistical units” as they implement their responsibilities to produce objective data.8 A federal statistical agency that has the respect and trust of its stakeholders and users, who can help publicly defend the agency, is better equipped to ward off or resist attempts by others to exert political or other undue external influence on the agency (see Principle 3). Within an agency, the professional staff’s adherence to the mission of the agency and its quality standards and ethical principles (see Practices 3 and 4) is also key to the agency’s preservation of its independence from political or other undue external interference.

Practices That Are Particularly Relevant for Principle 4

Practice 3: Commitment to Quality and Professional Standards of Practice

8 See OMB’s Statistical Policy Directive No. 1 in Appendix A.

Next: PRINCIPLE 5: Continual Improvement and Innovation »
Principles and Practices for a Federal Statistical Agency: Seventh Edition Get This Book
× 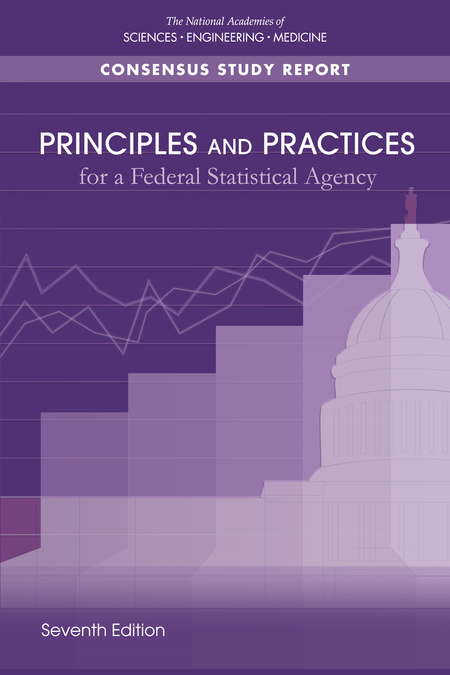 Government statistics are widely used to inform decisions by policymakers, program administrators, businesses and other organizations as well as households and the general public. Principles and Practices for a Federal Statistical Agency, Seventh Edition will assist statistical agencies and units, as well as other agencies engaged in statistical activities, to carry out their responsibilities to provide accurate, timely, relevant, and objective information for public and policy use. This report will also inform legislative and executive branch decision makers, data users, and others about the characteristics of statistical agencies that enable them to serve the public good.