An Assessment of Illness in U.S. Government Employees and Their Families at Overseas Embassies (2020)

Get This Book
Visit NAP.edu/10766 to get more information about this book, to buy it in print, or to download it as a free PDF.
« Previous: Front Matter
Page 1 Share Cite
Suggested Citation:"Summary." National Academies of Sciences, Engineering, and Medicine. 2020. An Assessment of Illness in U.S. Government Employees and Their Families at Overseas Embassies. Washington, DC: The National Academies Press. doi: 10.17226/25889.
×

In late 2016, U.S. Embassy personnel in Havana, Cuba, began to report the development of an unusual set of symptoms and clinical signs. For some of these patients, their case began with the sudden onset of a loud noise, perceived to have directional features, and accompanied by pain in one or both ears or across a broad region of the head, and in some cases, a sensation of head pressure or vibration, dizziness, followed in some cases by tinnitus, visual problems, vertigo, and cognitive difficulties. Other personnel attached to the U.S. Consulate in Guangzhou, China, reported similar symptoms and signs to varying degrees, beginning in the following year. As of June 2020, many of these personnel continue to suffer from these and/or other health problems. Multiple hypotheses and mechanisms have been proposed to explain these clinical cases, but evidence has been lacking, no hypothesis has been proven, and the circumstances remain unclear. The Department of State (DOS), as part of its effort to inform government employees more effectively about health risks at posts abroad, ascertain potential causes of the illnesses, and determine best medical practices for screening, prevention, and treatment for both short and long-term health problems, asked the National Academies of Sciences, Engineering, and Medicine (the National Academies) to provide independent, expert guidance.

The Standing Committee to Advise the Department of States on Unexplained Health Effects on U.S. Government Employees and Their Families at Overseas Embassies faced several challenges in assessing these clinical cases, including lack of access to individual-level health and other information, evolving and changing clinical features over time, and a highly heterogeneous population in terms of the timing and type of clinical symptoms and signs, to include those whose symptoms were only acute, only chronic or both. However, the committee was able to identify distinctive clinical features, consider possible causes, evaluate plausible mechanisms and rehabilitation efforts, and offer recommendations for future planning and responses.

A distinct set of unusual clinical manifestations occurred abruptly in some individuals at the onset of their illness, and the illness became chronic and debilitating for some, but not for all. The most distinctive clinical aspects of the illnesses were the nature of the onset and the initial features: the sudden onset of a perceived loud sound, a sensation of intense pressure or vibration in the head, and pain in the ear or more diffusely in the head. Most individuals reported that the sound or these other sensations seemed to originate from a particular direction and were perceived only when the individual was in a specific physical location. Some also reported sudden onset of tinnitus, hearing loss, dizziness, unsteady gait, and visual disturbances. From a neurologic standpoint, this combination of distinctive, acute, auditory-vestibular symptoms suggests an effect localized to the labyrinth or VIII cranial nerve or its brainstem connections.

Chronic symptoms suffered by many of those affected suggested problems with vestibular processing and cognition, as well as insomnia and headache; these manifestations are more consistent with diffuse involvement of forebrain structures and function, such as cerebral cortex or limbic structures. However, no consistent picture of brain injury emerged from laboratory-based tests of vestibular function. It is possible that these subsequent, more persistent symptoms were caused by sequelae of the same initial insult or that they occurred secondarily as an accommodative response. For those without reports of an acute initial phase, the symptoms

could be from a separate cause or a similar exposure that resulted more exclusively in forebrain dysfunction.

The committee found the unusual presentation of acute, directional or location-specific early phase signs, symptoms and observations reported by DOS employees to be consistent with the effects of directed, pulsed radio frequency (RF) energy. Many of the chronic, nonspecific symptoms are also consistent with known RF effects, such as dizziness, headache, fatigue, nausea, anxiety, cognitive deficits, and memory loss. Patient clinical heterogeneity could be due to variability of exposure dosage conditions, differences in interpretation of non-physiological vestibular stimuli, and anatomical differences that could influence individual exposure and/or response.

The committee also considered chemical exposures, infectious diseases and psychological issues as potential causes or aggravating factors. Although some reports suggested that exposure to organophosphates (OP) and/or pyrethroids from insecticide spraying in Havana could be a cause or contributing factor, the committee concluded that this mechanism was not likely because there was no convincing evidence of acute high-level exposures and the clinical histories of affected U.S. Embassy personnel were not consistent with acute OP poisoning. However, as insecticides can increase the risk or severity of adverse outcomes after exposure to a wide variety of physical or psychosocial stressors, the committee cannot rule out subacute or chronic OP and/or pyrethroid exposures as a possible contributing factor to nonspecific chronic symptoms.

Infectious agents known to be prevalent in Cuba at the time of the U.S. Embassy cases and capable of causing neurological manifestations most prominently include Zika, which was epidemic in Cuba in 2016-2017. However, after reviewing the medical and public health literature, the committee found it highly unlikely that Zika was the cause of the constellation of signs and symptoms reported among DOS personnel.

The acute initial, sudden-onset, distinctive, and unusual symptoms and signs are difficult to ascribe to psychological and social factors. However, the significant variability and clinical heterogeneity of the illnesses affecting DOS personnel leave open the possibility of multiple causal factors including psychological and social factors. These factors could exacerbate other causes of illness and cannot be ruled out as contributing to some of the cases, especially some of the chronic symptoms or later in the course of illness in some cases. Finally, the committee concurred with the diagnosis of persistent postural-perceptual dizziness (PPPD), a functional (not psychiatric) vestibular disorder that may be triggered by vestibular, neurologic, other medical and psychological conditions and may explain some chronic signs and symptoms in some patients.

Overall, directed pulsed RF energy, especially in those with the distinct early manifestations, appears to be the most plausible mechanism in explaining these cases among those that the committee considered, along with PPPD as a secondary reinforcing mechanism, as well as the possible additive effects of psychological conditions. The committee cannot rule out other possible mechanisms and considers it likely that a multiplicity of factors explains some cases and the differences between others. In particular, the committee could not be certain that the individuals with only the chronic set of signs and symptoms suffered from the same cause(s) and etiologic mechanisms as those who reported the initial, sudden onset set of signs and symptoms.

The committee recommends early evaluation and treatment, a supportive environment, and an interdisciplinary approach for rehabilitation of chronic neurological conditions. Without information on patient-specific treatment approaches and responses, it was difficult for the committee to develop recommendations on specific neurologic rehabilitation alternatives. For those with chronic vestibular symptoms, a diagnosis of PPPD offers a potential avenue for rehabilitative interventions.

Part of the committee’s task was to provide advice in anticipation of future threats to DOS personnel and their families’ well-being. To that end, the committee proposes a number of recommendations in order to enhance future responses.

Recommendation 1. The Department of State should expand its collection of baseline and longitudinal data and biological specimens from all personnel prior to and during overseas assignments.

The committee believes that there should be routine data collection for all DOS employees on foreign assignments, including collection of whole blood, plasma, and urine, as well as general medical and neurological examinations, and local environmental assessments. The Acquired Brain Injury Tool (ABIT) is a clinical assessment tool currently used pre- and post-deployment to inventory the same neurological, vestibular and auditory symptoms that were identified in DOS personnel in Cuba. However, given that the nature of future events is unknown, it would be wise to revise it and include symptoms beyond those encountered in Cuba and China.

Recommendation 2. The Department of State, with support from the U.S. government, should establish plans and protocols now to enable comprehensive, expeditious public health and research investigations in the future, should a cluster of new cases warrant investigation.

The committee recommends that a response capability be prepared and authorized in advance of the next potential set of cases, so that the necessary collection of information for a proper public health investigation of U.S. embassy employees can be undertaken in a timely fashion and made available immediately.

Recommendation 3. Following the identification of a possible new case cluster, the Department of State should ensure the collection of data critical for an effective investigation.

The committee suggests that DOS utilize an expert panel described in Section 6 to provide advice on the collection of routine medical data. In addition to the collection of data pertaining to individual diplomats, it is critical that additional public health and epidemiological surveillance data be obtained to provide the temporal and geographic context for the health presentation of individuals.

Recommendation 3-A. If research or assessments support the possibility of radio frequency (RF) energy as a cause of illness experienced by some of its employees, the Department of State should train and equip employees with the capability to measure and characterize their exposure to RF energy in real time should the need arise in the future.

Recommendation 3-B. The Department of State should develop a systematic approach for toxicological diagnoses, and a protocol that supports this approach.

Recommendation 4. The Department of State, with support from the U.S. government, should provide for appropriate personnel to identify public health emergencies and activate the necessary response.

DOS should consider a change in policy so that it enables structured medical investigations of affected individuals in a manner that does not preclude, but is separate from private medical care. The National Institutes of Health Disaster Research Response (DR2) Program may serve as a valuable model for a coordinated system-wide research response to public health emergencies. In addition, to facilitate early identification of health threats to Embassy personnel, the committee suggests an expanded role for health attachés.

Next: Section 1: Introduction and Charge to the Committee »
An Assessment of Illness in U.S. Government Employees and Their Families at Overseas Embassies Get This Book
× 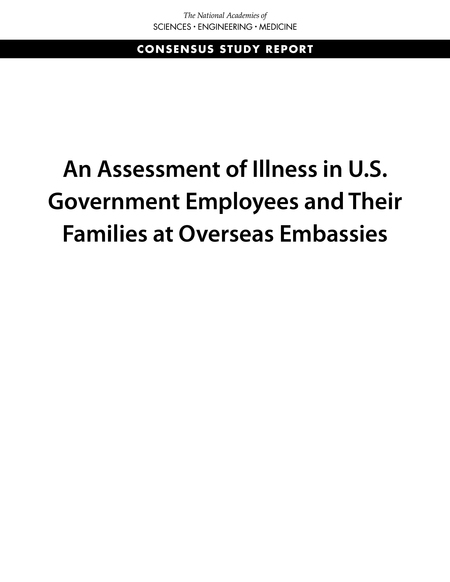 In late 2016, U.S. Embassy personnel in Havana, Cuba, began to report the development of an unusual set of symptoms and clinical signs. For some of these patients, their case began with the sudden onset of a loud noise, perceived to have directional features, and accompanied by pain in one or both ears or across a broad region of the head, and in some cases, a sensation of head pressure or vibration, dizziness, followed in some cases by tinnitus, visual problems, vertigo, and cognitive difficulties. Other personnel attached to the U.S. Consulate in Guangzhou, China, reported similar symptoms and signs to varying degrees, beginning in the following year. As of June 2020, many of these personnel continue to suffer from these and/or other health problems. Multiple hypotheses and mechanisms have been proposed to explain these clinical cases, but evidence has been lacking, no hypothesis has been proven, and the circumstances remain unclear.

The Department of State asked the National Academies to review the cases, their clinical features and management, epidemiologic investigations, and scientific evidence in support of possible causes, and advise on approaches for the investigation of potential future cases. In An Assessment of Illness in U.S. Government Employees and Their Families at Overseas Embassies, the committee identifies distinctive clinical features, considers possible causes, evaluates plausible mechanisms and rehabilitation efforts, and offers recommendations for future planning and responses.