Get This Book
Visit NAP.edu/10766 to get more information about this book, to buy it in print, or to download it as a free PDF.
« Previous: Appendix A: Mortality Data Analyses: Review Process and Detailed Mortality Rate Tables
Page 559 Share Cite
Suggested Citation:"Appendix B: Meeting Agendas." National Academies of Sciences, Engineering, and Medicine. 2021. High and Rising Mortality Rates Among Working-Age Adults. Washington, DC: The National Academies Press. doi: 10.17226/25976.
×

Next: Appendix C: Biographical Sketches »
High and Rising Mortality Rates Among Working-Age Adults Get This Book
× 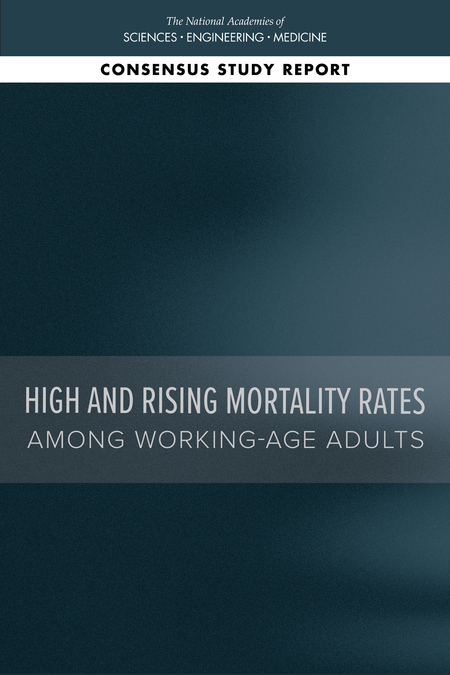 The past century has witnessed remarkable advances in life expectancy in the United States and throughout the world. In 2010, however, progress in life expectancy in the United States began to stall, despite continuing to increase in other high-income countries. Alarmingly, U.S. life expectancy fell between 2014 and 2015 and continued to decline through 2017, the longest sustained decline in life expectancy in a century (since the influenza pandemic of 1918-1919). The recent decline in U.S. life expectancy appears to have been the product of two trends: (1) an increase in mortality among middle-aged and younger adults, defined as those aged 25-64 years (i.e., "working age"), which began in the 1990s for several specific causes of death (e.g., drug- and alcohol-related causes and suicide); and (2) a slowing of declines in working-age mortality due to other causes of death (mainly cardiovascular diseases) after 2010.

High and Rising Mortality Rates among Working Age Adults highlights the crisis of rising premature mortality that threatens the future of the nation's families, communities, and national wellbeing. This report identifies the key drivers of increasing death rates and disparities in working-age mortality over the period 1990 to 2017; elucidates modifiable risk factors that could alleviate poor health in the working-age population, as well as widening health inequalities; identifies key knowledge gaps and make recommendations for future research and data collection to fill those gaps; and explores potential policy implications. After a comprehensive analysis of the trends in working-age mortality by age, sex, race/ethnicity, and geography using the most up-to-date data, this report then looks upstream to the macrostructural factors (e.g., public policies, macroeconomic trends, social and economic inequality, technology) and social determinants (e.g., socioeconomic status, environment, social networks) that may affect the health of working-age Americans in multiple ways and through multiple pathways.