Review of Methods Used by the U.S. Department of Energy in Setting Appliance and Equipment Standards (2021)

Get This Book
Visit NAP.edu/10766 to get more information about this book, to buy it in print, or to download it as a free PDF.
« Previous: 6 Addressing the Needs of a Changing World
Page 125 Share Cite
Suggested Citation:"Appendix A: Committee Biographies." National Academies of Sciences, Engineering, and Medicine. 2021. Review of Methods Used by the U.S. Department of Energy in Setting Appliance and Equipment Standards. Washington, DC: The National Academies Press. doi: 10.17226/25992.
×

LINDA R. COHEN is professor emerita of economics and law at the University of California, Irvine. Professor Cohen’s research lies at the intersection of economics, law, and political economy. She has published extensively on the economics of energy policy and innovation policy. Her current work focuses on the relationship between regulatory policy and innovation policy in addressing climate change and on the feasibility and effectiveness of alternative innovation policies in the absence of strong markets. She is a fellow and former council member of the California Council for Science and Technology, and was a member of the advisory panel for the Public Interest Energy Research Program for the California Energy Commission. She served on the National Academies of Sciences, Engineering, and Medicine’s committee assessing the potential for energy efficiency as part of the National Academies project “America’s Energy Future” and on the American Physical Society’s Panel on Public Affairs for the Committee on Energy and Environment. She has been a Gilbert White Visiting Fellow at Resources for the Future and a visiting fellow at the Smith School of Enterprise and the Environment at Oxford University. Professor Cohen received a Ph.D. in social sciences from the California Institute of Technology and a B.A. in mathematics from the University of California, Berkeley.

CHARLES CULP is a professor in the Department of Architecture at Texas A&M University, where he is also the associate director of the Energy Systems Laboratory (ESL). At the ESL, he is responsible for the development and implementation of Continuous Commissioning® tools used to improve energy efficiency in hundreds of large buildings including higher education facilities, medical facilities, office buildings, and airports. He has proposed and secured over $14 million in funding from federal and state governments and industry while at the Energy Systems Lab. Dr. Culp has conducted sponsor-supported research in low-energy-use commercial and residential building design; software control algorithms; energy studies; low velocity air movement studies; air movement in ducts; measurement and verification technology; serious gaming technology; and energy codes. He has had more than 30 years of experience in the heating, ventilation, air conditioning, and refrigeration (HVAC&R) field, both in the private and public sectors. During his employment at Interand, Dr. Culp designed interactive video systems. At Honeywell, he was a Honeywell fellow and designed and led the development on two major energy management and control system designs: Honeywell’s Delta 2500 and Delta 21. Previously, he has been the deputy director of Emerson’s Advanced Material Center, the director of Emerson’s Advanced Development Center, the director of engineering for Alco Controls, and the director of research for Fisher Controls. Dr. Culp is active in the American Society of Heating, Refrigerating, and Air-Conditioning Engineers (ASHRAE); a past president of ASHRAE’s College of Fellows; past chair of the Technical Activities Committee at ASHRAE; past member of the ASHRAE board of directors; and currently a voting member of ASHRAE’s Technology Council and Residential Building Committee. Dr. Culp received a B.S. in physics from the New Mexico Institute of Mining and Technology and a Ph.D. in solid state physics from Iowa State University.

SUSAN E. DUDLEY is the director of the George Washington University Regulatory Studies Center and a distinguished professor of practice in the Trachtenberg School of Public Policy and Public

Administration. She is the past president of the Society for Benefit Cost Analysis, a senior fellow with the Administrative Conference of the United States, a fellow of the National Academy of Public Administration, a member of the boards of the National Federation of Independent Businesses Legal Center and Economists Incorporated, and the chair of the Federalist Society Regulatory Transparency Project Regulatory Process Committee. Professor Dudley served as the presidentially appointed administrator of the Office of Information and Regulatory Affairs (OIRA); directed the Regulatory Studies Program at the Mercatus Center; taught courses on regulation at the George Mason University School of Law; served as a staff economist at OIRA, the U.S. Environmental Protection Agency, and the Commodity Futures Trading Commission; and was a consultant to government and private clients at Economists Incorporated. She holds an M.S. from the Sloan School of Management at the Massachusetts Institute of Technology and a B.S. (summa cum laude) in resource economics from the University of Massachusetts Amherst.

CLARK W. GELLINGS (NAE), an independent energy consultant, recently retired as a fellow at the Electric Power Research Institute (EPRI), where he was responsible for technology strategy in areas concerning energy efficiency, demand response, renewable energy sources, and other clean technologies. He was named EPRI fellow in 2009, in recognition of his more than 28 years of technical innovation and leadership. Mr. Gellings has made significant contributions to the development of demand-side management (DSM) and smart-grid research, among other technical areas. He pioneered smart-grid research when EPRI established its IntelliGrid research program in 1999. He has also conducted research in energy utilization, electrotechnologies, power quality, electric transportation, thermal and electrical energy storage, and renewables. From 1982 to 2009, Mr. Gellings served in seven vice president positions at EPRI. He has received a number of distinguished awards from various organizations. A licensed professional engineer and a member of the National Academy of Engineering, he has served on the National Academies’ Panel on Redesigning the Commercial Building and Residential Energy Consumption Surveys of the Energy Information Administration and on the Committee on Enhancing the Robustness and Resilience of Future Electrical Transmission and Distribution in the United States to Terrorist Attack. Mr. Gellings earned his B.S. in electrical engineering from the Newark College of Engineering, then earned an M.S. in mechanical engineering from the New Jersey Institute of Technology and an M.S. in management science from the Stevens Institute of Technology.

W. MICHAEL HANEMANN (NAS) joined the Arizona State University Department of Economics and the Center for Environmental Economics and Sustainability Policy in 2011, where he is a Wrigley Chair in Sustainability. Dr. Hanemann came to Arizona State University from the University of California, Berkeley, where he was a Chancellor’s Professor in the Department of Agricultural and Resources Economics and the Goldman School of Public Policy. His research interests include nonmarket valuation, the economics of water and of climate change, environmental policy, adaptive management, and demand modeling for market research. Dr. Hanemann has served on many committees of the National Academies and was elected to the National Academy of Sciences in 2011. He was a lead author and a contributing lead author for Working Group III of the Intergovernmental Panel on Climate Change (IPCC) Fifth Assessment Report on Climate Change. Dr. Hanemann received his B.A. degree from Oxford University in philosophy, politics, and economics; his M.S. from the London School of Economics in development economics; and his M.A. and Ph.D. from Harvard University in public finance and decision theory and economics. He received an honorary Ph.D. from the Swedish University of Agricultural Sciences and the Lifetime Award for Outstanding Achievement from the European Association of Environmental and Resource Economists. He is an inaugural fellow of the Association of Environmental and Resource Economists and a fellow of the American Association of Agricultural Economics.

DALIA PATINO-ECHEVERRI is the Gendell Family Associate Professor at Duke University in the Nicholas School of the Environment. Her research explores, assesses, and proposes technological, policy, and market approaches to pursue environmental sustainability, affordability, reliability, and resiliency in

the energy sector. Most of her work focuses on the decisions that regulators and private actors must make regarding capital investment and operations in the electricity industry and quantifying the value of flexibility along multiple dimensions. Her work uses operations research tools to account for path dependencies, uncertainty, and risk’s tradeoffs, ubiquitous in the energy system. Professor Patino-Echeverri received a Ph.D. in engineering and public policy from Carnegie Mellon University and a B.Sc. and an M.Sc. in industrial engineering from the University of The Andes (Bogota, Colombia).

ANAND PATWARDHAN is currently a professor in the School of Public Policy at the University of Maryland, College Park. He earlier served as the head of the School of Management from 2003-2004, and then moved to New Delhi as executive director of the Technology Information, Forecasting and Assessment Council (TIFAC) in the Ministry of Science and Technology, Government of India, from 2004-2008. Dr. Patwardhan works in the broad area of environment climate studies, focusing on the assessment of vulnerability and adaptation to climate change, and on the diffusion and adoption of clean technology. He has been a member of the Scientific and Technical Advisory Panel of the Global Environment Facility; and a coordinating lead author for the Fourth Assessment Report of the IPCC, and for the Millennium Ecosystem Assessment. Dr. Patwardhan is the co-chair of the Scientific Steering Committee for the Global Carbon Project, and is a member of a core consultative group on climate change for the Indian government. Dr. Patwardhan obtained his B.Tech. in electrical engineering from IIT-Bombay and later obtained his M.S. in environmental science and engineering and Ph.D. in engineering and public policy, both from Carnegie Mellon University.

Next: Appendix B: Committee Activities »
Review of Methods Used by the U.S. Department of Energy in Setting Appliance and Equipment Standards Get This Book
× 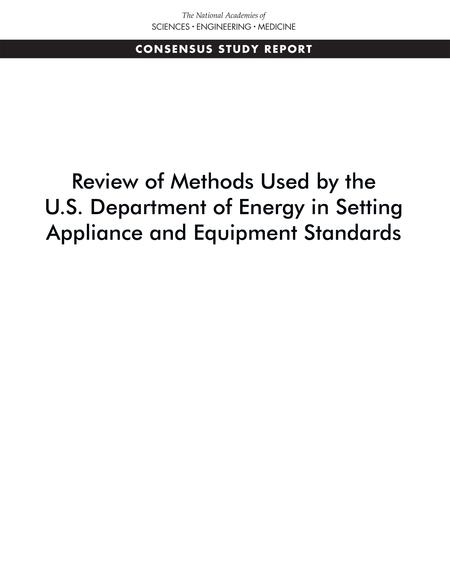 The U.S. Department of Energy (DOE) issues standards regulations for energy conservation pursuant to the Energy Policy and Conservation Act of 1975, as amended, and other authorities. These standards regulations apply to certain consumer products and commercial and industrial equipment. These can include air conditioning and heating systems, washing machines, and commercial refrigeration, among numerous other examples. DOE issues standards regulations by rulemaking and includes quantitative maximum water and energy use or minimum energy conservation standards. There are currently standards regulations for more than 70 product classes (i.e., a specific type of consumer product or commercial or industrial equipment). This report reviews the assumptions, models, and methodologies that DOE uses in setting the quantitative portion of the standards regulations following the Office of Management and Budget's guidance on the use of scientific information. Review of Methods Used by the U.S. Department of Energy in Setting Appliance and Equipment Standards makes findings and recommendations on how DOE can improve its analyses and align its regulatory analyses with best practices for cost-benefit analysis.