Models for Population Health Improvement by Health Care Systems and Partners: Tensions and Promise on the Path Upstream: Proceedings of a Workshop (2022)

Visit NAP.edu/10766 to get more information about this book, to buy it in print, or to download it as a free PDF.
« Previous: 7 Small-Group Interactive Exercise: Up/Mid/Downstream Paradigms in Advancing Population Health and Health Equity
Page 57 Share Cite
Suggested Citation:"8 Final Reflections." National Academies of Sciences, Engineering, and Medicine. 2022. Models for Population Health Improvement by Health Care Systems and Partners: Tensions and Promise on the Path Upstream: Proceedings of a Workshop. Washington, DC: The National Academies Press. doi: 10.17226/26059.
×

8 Final Reflections Joshua Sharfstein of the Johns Hopkins Bloomberg School of Public Health opened the final session of the workshop by sharing his reflections on the workshop. Sharfstein commented that in recent years there has been an increased focus in health care on population health at all levels and the undertak- ing of activities that are more upstreamâoriented toward policy change and systems change as opposed to individual clinical approaches. He noted that it is possible for the health care sector to be engaged in both downstream and upstream efforts and pointed to existing efforts by numerous organizations, including the Association of American Medical Â­Colleges and the American Hospital Association. (See Box 8-1 for a series of Â­questions that distill overarching individual speaker and participant observations and insights from the highlights boxes in each chapter.) Sharfstein shared his three overarching points from the workshop. First, the workshop, he remarked, offered a map of the population health world, and it showcased the broadened understanding of population health. The map, in other words, is not uncharted territory, he said. Orga- nizations and people have been working on these population health issues for a long time. He asserted that part of being successful is recognizing the work already taking place and collaborating with those already engaged. Second, Sharfstein suggested that it is acceptable for there to be multiple organizations working on an issue but there needs to be âorder to the chaos,â meaning there needs to be coordination and collaboration among stakeholders working toward similar goals. He sees providing coordina- tion and structure as an important role primarily for public health. As 57

58 MODELS FOR POPULATION HEALTH IMPROVEMENT BOX 8-1 Some Guiding Questions for Health Systems Distilled from Chapter Highlights 1. Is addressing social factors a part of your health care practice and system? 2. Is your organization facilitating the necessary pathways for the community to be involved and invested in the design, implementation, and evaluation of the work? 3. How would you evaluate the level of trust between the community and your organization, and what can be done to improve it, if needed? 4. Does your organization have the internal coordination and communication that is a prerequisite to work with outside partners? 5. Is health equity a priority that is baked into the infrastructure, decision making, accountability, and other dimensions of your organization and the partnership in which it participates? 6. Is your organization engaged, as appropriate, in actions that can influence policy making upstream? 7. Is your organization considering the community effects of all of its business decisions, from procurement to investment? 8. Is your organization providing funding for and/or advocating for funding for social services and health-related social needs? (See the accountable health communities discussion in Chapter 5 about the modelâs promise and current limitations.) 9. What are some potential tools and strategies, including by federal agencies, to incentivize health system work in communities and to change the community conditions for health? an example of building from downstream to upstream, Â­Sharfstein traced the beginnings of Baltimoreâs work to improve early childhood outcomes to an effort and structure that was constructed to simply address safe sleep, and it has grown to encompass more than 100 organizations and a wide array of coordinated efforts. Third, he recommended focusing on activities that have meaningful goals and outcomes. A structure can be organized around an outcome. Sharfstein acknowledged being particu- larly struck by Littleâs comment that getting data can be difficult in some communities. He suggested that a role for health care could be to provide data that is helpful in informing cross-sector strategies. Sanne Magnan of the HealthPartners Institute provided comments on the tensions and promise of the path upstream. She highlighted a tension that Laura Gottlieb of the Social Interventions Research and Evaluation Network at the University of California, San Francisco, raised of whether to invest in screening for social determinants of health versus addressing social determinants based on what is known about the patientâs zip code.

FINAL REFLECTIONS 59 Another tension that Magnan noted surfaced in the presentation from Darlene Oliver Hightower of the Rush University Medical Center: the sustainability of efforts to address social determinants of health. She also raised the issue of whether the health care sector, which already charges high prices for poor outcomes, should be tackling social determinants of health as a priority over high health care costs. She made the point that if health care costs were lowered, resources could be made available to invest in upstream approaches. Magnan clarified that her perspective is that health care organizations should both respond to rising health care costs and play a role in addressing the social determinants of health. Robert Kaplan of Stanford University recalled three questions articu- lated decades ago about how to determine whether something works in medicine: Can it work? Does it work? Is it worth it? He noted that much of what the National Institutes of Health invests in is focused on answering the first question, using mouse studies and answering scientific questions under ideal circumstances. The second question of âDoes it work?â is the basis of much of the work of the U.S. Food and Drug Administration. He noted that the third question is often left unanswered, with money being spent on health care interventions that may not be âworth it.â As he explained, many clinical preventive services have small effects. For example, of 1,000 women screened with mammography, a high percent- age of them will experience an adverse outcome, including the possibility of an unnecessary biopsy. Kaplan thinks addressing social determinants are clearly more âworth itâ than clinical interventions, given the data presented on the differences in life expectancy and outcomes based on social factors such as geography. However, he remarked that the ques- tions of âCan it workâ? and âDoes it work?â have not yet been adequately answered when considering addressing social determinants. Marc Gourevitch of New York University Langone Health com- mented that much of the discussion at the workshop has been from the health care perspective, in keeping with the workshop design. He acknowledged Magnanâs original framing that highlighted the tension over how population health may be overmedicalized by focusing on downstream close-to-the-patient solutions rather than upstream com- munity and societal solutions effective at the population level. The dayâs presentations underscored the notion that the health care sector can do a lot to promote population health both on its own and in partnership. Gourevitch suggested that health care has the opportunity to play an even greater role without implying that there is not also a role for other sec- tors in addressing social and economic drivers of health. Gourevitch also recommended that public health agencies identify and assess progress toward measurable goals, such as increasing life expectancy by a certain amount within a certain number of years.

60 MODELS FOR POPULATION HEALTH IMPROVEMENT Mylynn Tufte of the North Dakota Department of Health commented about the tensions and promise of technology in improving population health. She noted that patients, consumers, health care providers, and payers all have expectations related to the use of electronic health records and smartphones. A. J. Diamontopoulos of the Denver Regional Council of Govern- ments Area Agency on Aging suggested that there is too much emphasis in health care on return on investment. Instead, he suggested that popu- lation health should be focused on doing what is right. Analogizing to the tech industry, Diamontopoulos pointed out that many of the major technology companies were not successful during their first 10 years, but many are profitable now. He suggested that if health care were to focus on doing what is right for the population it serves, then the return on investment will come. Ernest Hawk of the University of Texas MD Anderson Cancer Center commented that he agreed with Diamontopoulos that health care workers get into the field to try to help people, and there is a need for increased emphasis on improving equity in addition to the more traditional metrics of safe, timely, and patient-centered care. He also highlighted the impor- tance of data, suggesting that more inclusive and periodic assessment of health behaviors tightly correlated with health outcomes of interest would be particularly useful. He recommended both deeper and more frequent assessment in the communities with the greatest needs. Philip Alberti of the Association of American Medical Colleges noted that there are uniquely American attributes that inhibit progress in popu- lation health and health equity. The values of individualism, competition, and racism get in the way of having effective coalitions that represent broad interests, he explained. He suggested that there is a need to better communicate with potential partners to understand what their own âself- ish metricsâ are for participating in the partnership, or in other words, how they or their organization will benefit. He suggested that effective partnerships should be able to achieve both individual and collective goals.

Next: Appendix A: References »
Models for Population Health Improvement by Health Care Systems and Partners: Tensions and Promise on the Path Upstream: Proceedings of a Workshop Get This Book
× 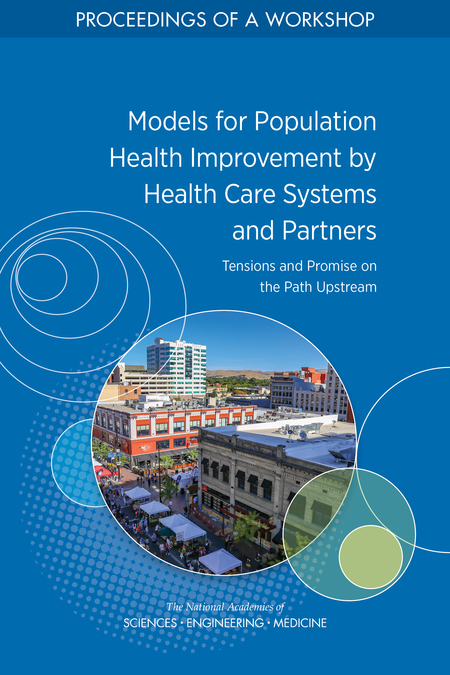 The Roundtable on Population Health Improvement of the National Academies of Sciences, Engineering, and Medicine hosted a public workshop on September 19, 2019 titled Models for Population Health Improvement by Health Care Systems and Partners: Tensions and Promise on the Path Upstream. The term upstream refers to the higher levels of action to improve health. Medical services act downstream (i.e., at the patient level) in improving population health, while such activities as screening and referring to social and human services (e.g., for housing, food assistance) are situated midstream, and the work of changing laws, policies, and regulations (e.g., toward affordable housing, expanding healthy food access) to improve the community conditions for health represents upstream action.

The workshop explored the growing attention on population health, from health care delivery and health insurance organizations to the social determinants of health and their individual-level manifestation as health-related social needs, such as patients' needs. The workshop showcased collaborative population health improvement efforts, each of which included one or more health systems. This publication summarizes the presentations and discussions from the workshop.