Get This Book
Visit NAP.edu/10766 to get more information about this book, to buy it in print, or to download it as a free PDF.
Page i Share Cite
Suggested Citation:"Front Matter." National Academies of Sciences, Engineering, and Medicine. 2021. The Emerging Field of Human Neural Organoids, Transplants, and Chimeras: Science, Ethics, and Governance. Washington, DC: The National Academies Press. doi: 10.17226/26078.
×

THE EMERGING FIELD
OF HUMAN NEURAL
ORGANOIDS, TRANSPLANTS,
AND CHIMERAS

Committee on Ethical, Legal, and Regulatory Issues Associated with
Neural Chimeras and Organoids

Committee on Science, Technology, and Law

A Consensus Study Report of

This activity was supported by contracts from the National Institutes of Health (Sponsor Award Number HHSN263201800029I/75N98019F00861) and The Dana Foundation. This Project has been funded in whole or in part with federal funds from the National Institutes of Health, Department of Health and Human Services, under Contract No. HHSN263201800029I. Any opinions, findings, conclusions, or recommendations expressed in this publication do not necessarily reflect the views of any organization or agency that provided support for the project.

Copyright 2021 by the National Academy of Sciences. All rights reserved.

COMMITTEE ON ETHICAL, LEGAL, AND REGULATORY ISSUES ASSOCIATED WITH NEURAL CHIMERAS AND ORGANOIDS

COMMITTEE ON SCIENCE, TECHNOLOGY, AND LAW

SUSAN S. SILBEY, Leon and Anne Goldberg Professor of Humanities, Professor of Sociology and Anthropology, and Professor of Behavioral and Policy Sciences, Massachusetts Institute of Technology

More than any other organ, the brain gives human beings their unique identities. The complexity of the human brain has perplexed researchers, and its central role in the mystery termed consciousness continues to challenge the boundaries between science and philosophy. Conversely, devastating neurological and psychiatric diseases and disorders not only cause untold suffering but can also rob people of their identity. For many of these diseases, treatments are completely unavailable, and for others they are hopelessly inadequate.

Research over the past several decades has greatly advanced understanding of the brain and begun to provide new therapeutic approaches to brain diseases. However, progress in this area is stymied by the practical and ethical difficulties of studying the human brain and by serious limitations of existing tools and models. In response, researchers have worked to develop new models that promise a deeper understanding of the human brain and new treatments for brain disorders. These new models include human neural organoids, transplants of human stem cells into nonhuman animal brains, and human neural chimeras. However, as models of the brain improve to better reflect the characteristics of actual human brains, they also raise profound ethical questions. It has become clear that in using these models to advance understanding of the brain, it will be necessary to pay attention to what lessons they might teach about consciousness and what it means to be human.

For the past year, at the request of the National Institutes of Health and the Dana Foundation and under the auspices of the National Academies of Sciences, Engineering, and Medicine’s Committee on Science, Technology, and Law, we co-chaired a committee of scientists, ethicists, and legal scholars that explored recent scientific advances and ethical and governance issues associated with hu-

man neural organoids, transplants, and chimeras. The committee heard from numerous experts and reviewed relevant scientific literature, religious scholarship, and current laws and policies. We are grateful for the individuals who spoke to and engaged in thoughtful discussions with the committee. Their expertise contributed greatly to the committee’s deliberations. In particular, interactions among biomedical scientists, ethicists, religious scholars, and legal experts provided the committee with important insights.

We are deeply indebted to the committee members for the time and effort they devoted to reading and reviewing background materials; preparing for discussions with invited experts; attending virtual meetings; and engaging in thoughtful, critical analysis and discussion with each other. This report is a reflection of their commitment to understanding the issues under consideration.

The committee gratefully acknowledges the thoughtful contributions of the following individuals who made presentations before the committee:

This Consensus Study Report was reviewed in draft form by individuals chosen for their diverse perspectives and technical expertise. The purpose of this independent review is to provide candid and critical comments that will assist the National Academies of Sciences, Engineering, and Medicine in making each published report as sound as possible and to ensure that it meets the institutional standards for quality, objectivity, evidence, and responsiveness to the study charge. The review comments and draft manuscript remain confidential to protect the integrity of the deliberative process.

We thank the following individuals for their review of this report:

Although the reviewers listed above provided many constructive comments and suggestions, they were not asked to endorse the conclusions or recommendations of this report nor did they see the final draft before its release. The review of this report was overseen by Wylie Burke (NAM), University of Washington, and Thomas D. Albright (NAS), Salk Institute for Biological Studies. They were responsible for making certain that an independent examination of this report was carried out in accordance with the standards of the National Academies and that all review comments were carefully considered. Responsibility for the final content rests entirely with the authoring committee and the National Academies.

Organization of the Report

2 THE SCIENCE OF HUMAN NEURAL ORGANOIDS, TRANSPLANTS, AND CHIMERAS

Issues Common to All Three Models

Use of Human Stem Cells

Use and Care of Animals in Research

Use of Nonhuman Primates in Research

U.S. Policy and Guidance Specific to Neural Transplants and Chimeras

Public Engagement Internationally and in the United States

6 FINDINGS OF THE COMMITTEE

Value of This Research

A Biographies of Committee and Staff Members

2-1 Architecture of the human nervous system

2-2 Cells of the nervous system

Next: Summary »
The Emerging Field of Human Neural Organoids, Transplants, and Chimeras: Science, Ethics, and Governance Get This Book
× 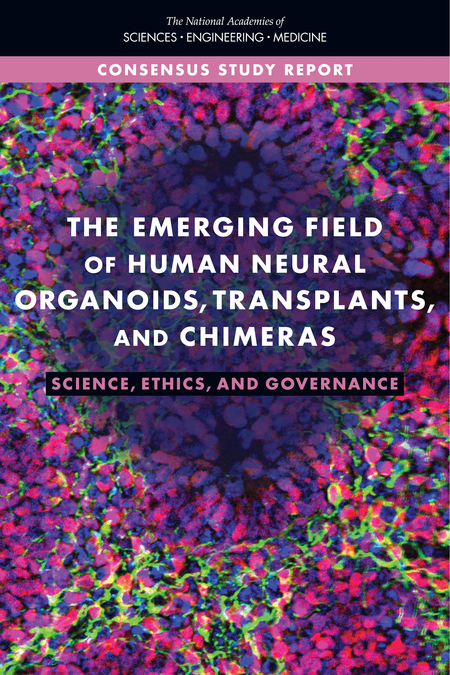 Each year, tens of millions of individuals in the U.S. suffer from neurological and psychiatric disorders including neurodegenerative diseases such as Alzheimer's Disease and Parkinson's Disease, and psychiatric disorders such as autism spectrum disorder, depression and schizophrenia. Treatments for these diseases are often completely lacking or only partially effective, due in large part to the difficulty of conducting brain research and the complexity of the brain itself.

Researchers in recent years have developed new models to better represent and study the human brain. The three models considered in this report, all of which generate and use pluripotent stem cells from healthy individuals and patients, are human neural organoids, human neural transplants, and human-animal neural chimeras. The Emerging Field of Human Neural Organoids, Transplants, and Chimeras: Science, Ethics, and Governance reviews the status of research, considers its benefits and risks, discusses associated ethical issues, and considers governance mechanisms for this type of research.