Visit NAP.edu/10766 to get more information about this book, to buy it in print, or to download it as a free PDF.
« Previous: Summary
Page 3 Share
Suggested Citation:"Chapter 1 - Introduction." National Academies of Sciences, Engineering, and Medicine. 2021. Practices for Construction-Ready Digital Terrain Models. Washington, DC: The National Academies Press. doi: 10.17226/26085.
×

3 Introduction Digital terrain models (DTMs) are three-dimensional (3D) models of the bare ground surface with natural features such as ridges and breaklines. For highway designers, modeling in 3D with DTMs for visualization and design purposes is not a new capability; however, with the advancement of surveying technology and automated machine guidance (AMG), construc- tion and inspection staff also can leverage DTMs for improved production and efficiency. Despite technological advancements, the handover of DTMs from design to construction has significant inefficiencies for a variety of reasons and remains an inconsistent practice nationally. This NCHRP synthesis documents practices related to that process and to the use of DTMs in construction throughout the United States. A DTM can represent both the existing terrain condition and the projectâs as-designed terrain condition. This report references the DTM as the as-designed terrain condition. Occasionally, this report also uses the term âmodelâ or â3D model,â which generally refers to the electronic engineering design data in 3D form that would include the DTM. This first chapter of the report provides an overview of the topic, outlines the objective of the synthesis, and describes the study approach. 1.1 Background Several recent initiatives have specifically sought to push 3D models into the construction phase of projects. For example, FHWA began its Every Day Counts (EDC) program in 2009 as a joint venture between FHWA and AASHTO. EDC focuses on pushing new innovations to accelerate highway project delivery by capturing and sharing case studies and workshops (1, 2). EDCâs 2-year cycle starts by securing buy-in from stakeholders and soliciting recommendations on innovations. A baseline evaluation of the innovation is reported, and state and local agencies are tracked for the deployment and use of those innovations. Beyond improving project delivery, another of EDCâs goals is to encourage intelligent risk-taking at departments of transportation (DOTs) that may be hesitant to embrace emerging technologies. EDC Round 2 (EDC-2, 2013â2014) and Round 3 (EDC-3, 2015â2016) involved 3D models in construction. EDC-2 encouraged â3D Engineered Models for Constructionâ (3). EDC-3 drilled down to a topic of â3D Engineered Models: Schedule, Cost, and Post-Constructionâ (4). EDC-2 found primary benefits in improved project delivery, improved communication, enhanced identification of errors, and improved visualization (3). Specific benefits were identified by various stakeholders as well. For agencies, 3D models allowed for random grade checks at specified cross-sections, realization of material cost savings, and easier identification of quality assurance (QA) test locations. For contractors, the primary benefits included labor C H A P T E R 1

4 Practices for Construction-Ready Digital Terrain Models savings (through elimination of staking and stringlines), increased productivity, fewer conflicts, and fewer changes. Consultants benefited from early identification of constructability concerns, improved design accuracy, and improved visual verification for quality control (QC). Overall, FHWA identified 66% savings in grade checking, 85% reduction in stakes, 3%â6% improved material yields, and 30%â50% reduction in earthwork interruptions (3). Ultimately, total project cost savings of 4%â6% were found (3). The focus in 2015 and 2016 was on integrating cost, schedule, and post-construction data (survey, as-built, and other asset management data) into the 3D models through EDC-3. The benefits found include improved project management, more accurate cost estimates, and a living record throughout the project life cycle (4). FHWA captured case studies from the California, Washington state, and Massachusetts DOTs to identify these benefits. Ultimately, the final report from EDC-3 published data on the degree of implementation for 3D models used in planning, design, and construction, as seen in Figure 1 (5). There were significant improvements in adoption from the baseline in January 2015 to the end of the EDC round in December of 2016; however, it is not clear if that adoption was strictly the 3D design file used or if it included the existing terrain captured in a DTM. This report can bridge that knowledge gap by identifying the state of practice of DTM use in the construction phase of highway projects. Figure 1. FHWA EDC-3 baseline and goal for 3D models in planning, design, and construction (5).

Introduction 5 1.2 Synthesis Objective This synthesis seeks to gather state-of-practice information regarding the current processes and strategies for effective use and transfer of DTMs from design into the construction phase of highway projects. DTMs have significant potential to improve the accuracy and efficiency of construction and inspection operations, yet little research exists to detail practices and perfor- mance. The purpose of this synthesis is to document and identify DOTs that have experience using DTMs in construction and to provide an overview of implementation to date and of lessons learned, identifying success factors and challenges. Specifically, this synthesis collected the following information regarding the use of DTMs in highway construction: â¢ Extent of DOT use of DTMs for construction and inspection â¢ Size and type of projects using DTMs for construction (e.g., new construction, rehabilitation, maintenance) â¢ Existence of written DOT guidance for the use of DTMs in design and construction phases â¢ Whether DTMs are considered legal documents and, if so, the extent of liability for accuracy and level of detail â¢ How DOTs ensure that the contractorâs DTM is equivalent to the designerâs DTM â¢ Whether DTMs are provided to contractors for âinformation onlyâ during the letting process â¢ Responsibility for DTM model modifications during construction (e.g., DOT staff, consultants, contractors) â¢ DOT process for quality control and assurance â¢ Benefits of and challenges to effective use of DTMs in construction 1.3 Study Approach An extensive literature review on the topic provided the initial understanding on the current state of research and practice regarding 3D modeling and DTM use in highway construction. The existing literature and previous discussions with DOTs assisted with the development of the survey questionnaire. A survey was created to capture the state of practice of DTMs within DOTs. Under the guidance of the topic panel, the survey was divided into the following categories: Demographic Information, General DTM Use, Project-Specific DTM Use, User/Non-User Experience Feed- back, Legal Issues, and Designer/Contractor Interface. Qualtrics provided the platform for the creation and distribution of the electronic survey. Once the final draft of the survey was approved, an email request with the survey link was distributed to the voting DOT members of the AASHTO Committee on Construction. At the time of survey distribution, this constituted voting members from each of the 50 U.S. states as well as the District of Columbia. The com- mittee members were asked to distribute the survey to individuals with knowledge of DTM use within their organizations. The complete survey questionnaire is shown in Appendix A with aggregate results presented in Appendix B. Forty responses were collected from the survey. This sample represents participation by 40 different DOTs, providing an 80% response rate from the 50 state DOTs. The map in Figure 2 shows the states that responded to the survey. Following the analysis of survey responses, subsequent case examples were conducted to gather further information on the topic. Because DTM use in construction is widespread but inconsistent nationally, a strategy was needed to select the states for the case examples. The selection criteria included DOTsâ experience with DTMs, the number of projects that have used DTMS, and the use of DTMs as part of contract documents. Six states were chosen for the

6 Practices for Construction-Ready Digital Terrain Models examples to provide an in-depth understanding of the successes, challenges, and barriers to using DTMs in construction. Five of the chosen states had significant experience, both in time and number of projects, with DTMs. One state was specifically targeted for its initiatives related to e-construction despite its limited experience with DTMs. The states were contacted for assistance with the study, and all six agreed to participate in the interviews. Details of the indi- vidual case examples are outlined in Chapter 4, and the questions asked during the interviews can be found in Appendix C. Figure 2. Map of DOTs responding to survey.

Next: Chapter 2 - Literature Review »
Practices for Construction-Ready Digital Terrain Models Get This Book
× 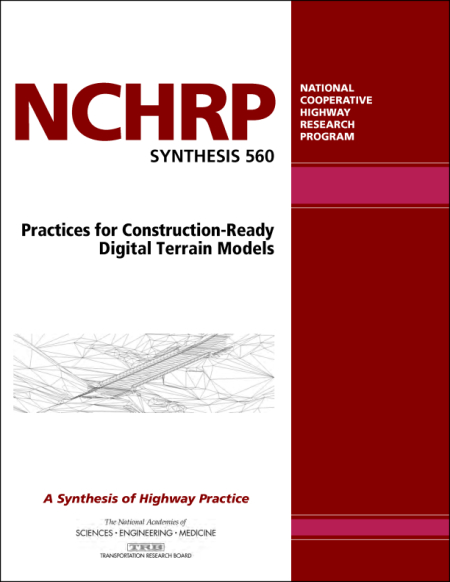 Digital terrain models (DTMs) are three-dimensional (3D) models of the ground surface showing natural features such as ridges and breaklines.

The TRB National Cooperative Highway Research Program's NCHRP Synthesis 560: Practices for Construction-Ready Digital Terrain Models documents processes and strategies used by state departments of transportation (DOTs) for the use and transfer of DTMs from design into the construction phase of highway projects.