An Update on Public Transportation's Impacts on Greenhouse Gas Emissions (2021)

Visit NAP.edu/10766 to get more information about this book, to buy it in print, or to download it as a free PDF.
« Previous: Summary
Page 5 Share
Suggested Citation:"Chapter 1 - Public Transportation s Greenhouse Gas Impacts in Context." National Academies of Sciences, Engineering, and Medicine. 2021. An Update on Public Transportation's Impacts on Greenhouse Gas Emissions. Washington, DC: The National Academies Press. doi: 10.17226/26103.
×

5Â Â  Public Transportationâs Greenhouse Gas Impacts in Context Transportation is a major source of the greenhouse gas (GHG) emissions that are causing climate change. In 2018, transportation accounted for 28% of all GHG emissions in the United States, and 3.2Â trillion vehicle miles were traveled on U.S. roads (U.S. EPA 2020d, FHWA 2019a). Global climate change is inflicting significant harm to communities through extreme storms, flooding, wildfires, heat emergencies, and more impacts to local economies, public health, and safety (U.S. Global Change Research Program 2018). As U.S. communities work to cut emissions and become more resilient, they are looking to public transportation as a climate action strategy. For example, a 2020 Carbon Disclosure Project (CDP) and ICLEIâLocal Governments for Sustainability survey of city climate change mitigation actions reported data on 43 U.S. cities taking 237 massÂ­transitârelated actions (CDP and ICLEI 2020). This report provides updated national analysis of public transportationâs role as a climate solution by documenting its GHG impacts in 2018, the most recent complete data year availÂ­ able at the time of the analysis. (Data from 2019 released as this report went to publication indicate a similar level of transit vehicle and passenger activity.) C H A P T E R 1

6 An Update on Public Transportationâs Impacts on Greenhouse Gas Emissions Public Transportationâs GHG Reduction Actions Technology, Fuels, and Operations TCRP publications such as TCRP Synthesis 130: Battery Electric BusesâState of the Practice provide a catalog of information for transit agency efficiency, energy savings, and emissions reductions (Hanlin etÂ al. 2018). Practitioners have identified interest and investments in electrification, such as battery electric buses powered by renewable electricity, but cost and applicability are also driving interest in other technologies, such as compressed natural gas and hydrogen fuel cells (The Connecticut Academy of Science and Engineering 2018). However, interest in particular fuels may be shifting as more is learned about their full lifeÂ­cycle GHG impacts. Installation of renewables on transit agency property, including solar canopies on parking lots, is another way that some transit agencies are taking climate action. There is interest in pairing that with energy storage to take fuller advantage of renewables and their GHG reduction potential. Some transit agencies are also procuring renewable gridÂ­connected electricity. Ridership and Land Use Increasing ridership and increasing the occupancy per vehicle are other strategies that can lead to measurable emissions impacts. Transit agencies are working to optimize their routes and service to support additional ridership as travel needs evolve. TCRP Research Report 221: Redesigning Transit Networks for the New Mobility Future (Byala etÂ al. 2021) provides case studies and toolkits for this purpose. Several transit agencies are working with housing developers to encourage new housing near transit, an approach that can boost ridership and lower emissions [San Francisco Municipal Transportation Agency (SFMTA) n.d.]. There is a growing focus on affordable housing in response to rising costs around the country, and transit agencies are looking to create equitable transitÂ­oriented development (TOD) to encourage land use densities without displacement [Bay Area Rapid Transit (BART) 2016]. Transit agencies are also interested in TOD beyond housing to a broader set of mixed land uses, including retail and job centers. State and local policy changes are enabling, and even in some cases requiring, zoning changes and TOD near transit stations. How passengers access transit is another point of focus, with transit agencies and communities improving bicycle and pedestrian access to stations and stops, which can also lower transportation emissions. Overall, the literature shows that transit creates a net GHG emissions benefit for commuÂ­ nities and that communities are looking to transit to help them meet their climate action goals. Transit agencies are meeting this demand with innovative strategies to reduce their own carbon footprints while increasing the emissions reductions benefits they bring to commuÂ­ nities. This report seeks to clearly document these GHG impacts to help transit agencies plan and communicate with stakeholders about their contributions to climate action. GHG Accounting Tools and Methods APTAâs 2018 Recommended Practices for Quantifying Greenhouse Gas Emissions from Transit is an update of its 2009 document that lays out GHG accounting methods for transit agencies. The APTA Recommended Practice has served as an important reference for the field, setting a framework for understanding the many emissions impacts of transit and providing practical approaches to assessment (APTA 2018). The APTA Recommended Practice references the Climate Registry General Reporting Protocol [The Climate Registry (TCR) 2019] and the GHG

Public Transportationâs Greenhouse Gas Impacts in Context 7Â Â  Protocol [World Business Council for Sustainable Development (WBCSD) and World Resources Institute (WRI) 2004] and their associated guidance documents in its recommendations, and those have been good resources for transit agencies as well. This study uses the APTA RecomÂ­ mended Practice as its analytical framework. The methods used to assess the GHG emissions impacts in these categories are further described in ChapterÂ 2 and the appendices. Publicly Available Tools to Estimate Transit GHGs For transit agencies documenting their own emissions impacts or wanting to estimate the emissions of a specific transit project, several tools are publicly available, including U.S. EPA tools. Also: â¢ The FTAâs 2017 Greenhouse Gas Emissions from Transit Projects: Programmatic Assessment and the âTransit Greenhouse Gas Emissions Estimatorâ spreadsheet tool provide useful data on the construction, operations, and maintenance of public transit systems (FTA 2016 and FTA 2017). â¢ The GHG Protocolâs tools that, though not designed specifically for transit agencies, are widely used by organizations and communities in the United States to calculate emissions (WBCSD and WRI 2004). â¢ The spreadsheet tool released in conjunction with this report provides the GHG analysis findings by transit agency and mode along with simple electrification, clean energy, and ridership increase scenarios. Previous Assessments of Public Transportation GHG Impacts An estimation of U.S. public transportationâs 2005 GHG impacts found a net 7Â million metric tons of CO2 (MMT CO2) saved by public transportation through avoided personal vehicle use and congestion relief (Davis and Hale 2007). A followÂ­on study examined the vehicle miles avoided by nonÂ­transit riders in communities with transit, which increased transitâs estimated net benefit to 37 MMT CO2 (Bailey etÂ al. 2008). Calculating transitâs GHG impacts is a wellÂ­established practice that continues to evolve as research provides new approaches and applied work creates the need for new information. This study seeks to update the understanding of transit GHG impacts and account for the changes that have occurred since the study of 2005 emissions. Factors Changing Public Transportationâs GHG Impacts In the years since transitâs 2005 GHG emissions were documented, major transit expanÂ­ sions have occurred in several cities. The National Transit Database (NTD) shows more than 1,000 miles of additional fixed guideway rail between 2009 and 2018 (FTA 2019a). Transit agencies also have many new ways to lower their emissions, such as through vehicle efficiency and alternative fuels (McGraw etÂ al. 2010, Gallivan and Grant 2010, Hanlin etÂ al. 2018). There are many drivers of climate actions by transit agencies. National, state, and local policies have led to transit adopting new vehicles and fuels. Transit agencies have set their own internal goals for climate action. Transit agency partners, such as the communities and the institutions they serve, including universities, have set climate goals that further support transit decarbonization. Additionally, our understanding of transitâs impacts in the community has grown. These are all factors that would lead one to believe that transitâs GHG benefits were larger in 2018 than they were estimated to be in 2005.

8 An Update on Public Transportationâs Impacts on Greenhouse Gas Emissions Even transit agencies without a specific climate target may be improving their fuel economy to reduce costs. Many service and operations improvements that transit agencies undertake to reduce costs or improve reliability also generate carbon savings, such as asset mainteÂ­ nance that keeps vehicle operating at maximum efficiency and transit traffic prioritization that reduces idling. That said, there are counteracting factors that may be influencing transit GHG impacts as wellâthe rise of ridehailing services, relatively inexpensive gasoline, perception of public health risk, and transit service challenges, such as congestion delays, are among the factors that have affected transit ridership (Watkins etÂ al. 2020, TransitCenter 2019). Nevertheless, as the assessment results in ChapterÂ 3 demonstrate, public transportationâs GHG benefit has grown significantly since 2005, and public transportation has the potential to provide even greater climate benefits going forward. Public Transportation Emissions in the COVID-19 Era The impact of the COVIDÂ­19 pandemic on public transportation has been significant but has not yet been fully documented in the literature, and the longÂ­term impact remains to be seen. This study uses 2018 data, which is prior to any COVIDÂ­19 impacts, but there are some initial data points available that show the scale of change in 2020. Many places began to institute regulatory policies that led to working from home and other travel activity changes in March 2020. Monthly data for 2020 show 3.1Â billion transit passenger trips from March through December, as compared to 8.4Â billion in the same period of 2019; however, not all transit agencies had reported their data for 2020 at the time of this writing (FTA 2020b). The emissions impacts of this are likely complex, as all of the elements of public transporÂ­ tationâs GHG profile are affectedâless fuel will have been used to power transit vehicles in areas that have reduced service, but on some routes carrying essential workers, service has increased to address overcrowding concerns, and each transit vehicle is carrying fewer passengers on average. At the same time, the travel patterns of entire communities have been upended. It is hoped that the analysis of public transportationâs climate impacts in 2018 provided in this report will give decision makers and stakeholders useful data to support transitâs role as a climate solution in a postÂ­pandemic future.

Next: Chapter 2 - Research Approach »
An Update on Public Transportation's Impacts on Greenhouse Gas Emissions Get This Book
× 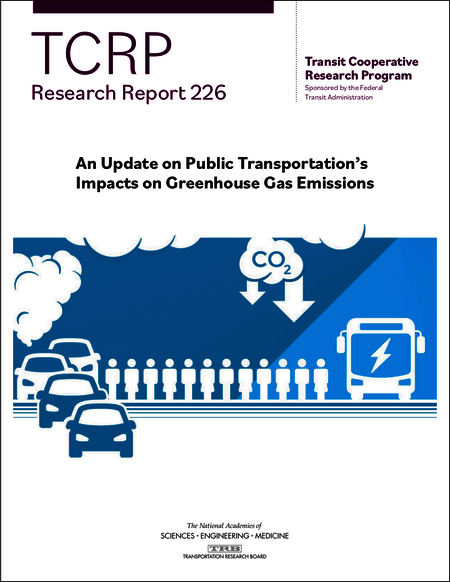 Transportation is a major source of the greenhouse gas (GHG) emissions that are causing climate change. As communities work to cut emissions and become more resilient, they are including public transportation advances as a significant part of their climate action strategies.

Supplemental materials to the report include three factsheets (Fact Sheet 1, Fact Sheet 2, and Fact Sheet 3); various key findings regarding transit as a climate solution; a PowerPoint presentation summarizing the findings and research and a template for transit agencies to add their own data for climate communications; and a simple spreadsheet tool that provides this study’s 2018 GHG impact findings by transit agency and allows the user to apply several of the future scenarios to see how their transit agency’s GHG impacts change with electrification, clean power, and ridership increases.