Reckoning with the U.S. Role in Global Ocean Plastic Waste (2022)

Get This Book
Visit NAP.edu/10766 to get more information about this book, to buy it in print, or to download it as a free PDF.
« Previous: Appendix B: Definitions and Acronyms
Page 217 Share Cite
Suggested Citation:"Appendix C: Legal Framework." National Academies of Sciences, Engineering, and Medicine. 2022. Reckoning with the U.S. Role in Global Ocean Plastic Waste. Washington, DC: The National Academies Press. doi: 10.17226/26132.
×

Starting in the 1970s, the United States created several legal frameworks designed to control and prevent the release of harmful, toxic, or hazardous substances, as well as manage their transportation, treatment, and disposal. Federal law regulates waste disposal and pollution dispersed across political boundaries (by air and water and soil) with various levels of delegation to states and local authorities. A report issued in late 2020 described a U.S. strategy (2020 Strategy) that included legal authorities and roles of certain federal agencies. In 2021, the United States reported the federal legal framework for marine plastic debris as the Resource Conservation and Recovery Act (RCRA), the Clean Water Act (CWA), the Marine Debris Act as amended in 2018, the Save Our Seas 2.0 Act, the Microbead Free Waters Act of 2015, the Toxic Substances Control Act, and the Rivers and Harbors Appropriations Acts (G20 2021, Ministry of Environment, Japan 2020).

The Solid Waste Disposal Act and RCRA treat plastic waste as a subset of municipal solid waste for disposal in landfills or by incineration. CWA and the Clean Air Act address water and air pollution but do not specifically include plastic waste as a regulated pollutant. In 2006, the

1 The prepublication of this report did not include all of the citations used in the preparation of the Appendix C table. The table has been edited to provide more accurate and complete citations.

The most specific legislative action around plastic pollution in aquatic and marine environments was the 2015 Microbead Free Waters Act, which prohibits the manufacturing, packaging, and distribution of rinse-off cosmetics and other products, such as toothpaste, containing plastic microbeads. Other federal laws such as the Ocean Dumping Act support global agreements restricting dumping and pollution from ships and vessels, not land-based sources. International law has been amended to control exports of plastic waste under the Basel Convention on the Control of Transboundary Movements of Hazardous Wastes and Their Disposal, but the United States is not a signatory.

Legal cases testing whether microplastic or macroplastic waste are subject to federal, state, and other legal limits or liability, including under common law, are simultaneously working their way through the courts.

States and local governments also play an increasing role in responding to plastic waste. This work and the subsequent table has been adapted from legal background and information from Mary Ellen Ternes and Scott Fulton (Ternes and Fulton 2020). The following tables and information reflect federal authorities and a summary of state actions on plastic waste and related activities (e.g., research and development and monitoring as of October 2021). References are included at the end for additional details.

In the absence of federal legislation, state and local governments have taken action to address problems associated with plastic waste “leakage” and litter that is finding its way to the environment. These measures are largely related to single-use plastic items found in cleanups and in waterways. These measures include existing plastic bag laws, product bans, extended producer responsibility, container deposit schemes (bottle bills), and recycling. These local “legislative” laboratories are testing the efficacy of different methods, most focused on single-use plastic bags. As of 2019,

oo See https://www.lexisnexis.com/community/casebrief/p/casebrief-lujan-v-defenders-of-wildlife, as presented in Ternes and Fulton (2020).

“there were 331 local plastic bag ban ordinances across 24 states in the United States.”2 However, some municipalities have been challenged by state preemption laws and lawsuits around local ordinances.

4 Other summaries of federal and state activities related to marine debris and plastic waste: https://law.ucla.edu/news/federal-actions-address-marine-plastic-pollution; https://www.epa.gov/environmental-topics/land-waste-and-cleanup-topics; and https://www.ncsl.org/research/environment-and-natural-resources/plastic-bag-legislation.aspx.

Next: Appendix D: Estuary Table »
Reckoning with the U.S. Role in Global Ocean Plastic Waste Get This Book
× 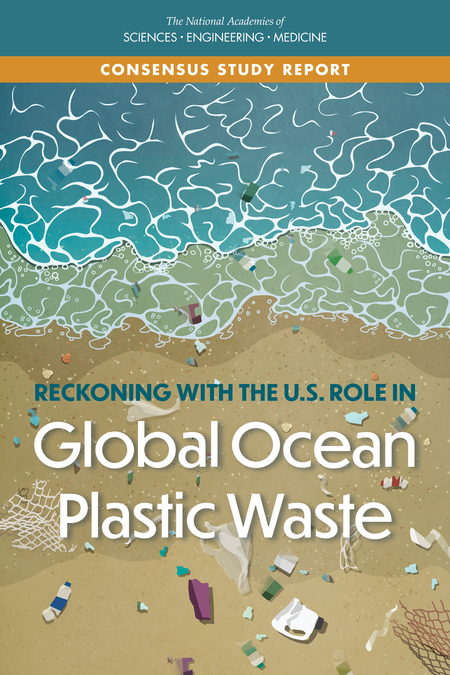 An estimated 8 million metric tons (MMT) of plastic waste enters the world's ocean each year - the equivalent of dumping a garbage truck of plastic waste into the ocean every minute. Plastic waste is now found in almost every marine habitat, from the ocean surface to deep sea sediments to the ocean's vast mid-water region, as well as the Great Lakes. This report responds to a request in the bipartisan Save Our Seas 2.0 Act for a scientific synthesis of the role of the United States both in contributing to and responding to global ocean plastic waste.

The United States is a major producer of plastics and in 2016, generated more plastic waste by weight and per capita than any other nation. Although the U.S. solid waste management system is advanced, it is not sufficient to deter leakage into the environment. Reckoning with the U.S. Role in Global Ocean Plastic Waste calls for a national strategy by the end of 2022 to reduce the nation's contribution to global ocean plastic waste at every step - from production to its entry into the environment - including by substantially reducing U.S. solid waste generation. This report also recommends a nationally-coordinated and expanded monitoring system to track plastic pollution in order to understand the scales and sources of U.S. plastic waste, set reduction and management priorities, and measure progress.