COVID-19 and the Present and Future of Black Communities: The Role of Black Physicians, Engineers, and Scientists: Proceedings of a Workshop (2021)

Get This Book
Visit NAP.edu/10766 to get more information about this book, to buy it in print, or to download it as a free PDF.
« Previous: 5 Community Response and Community Resilience
Page 57 Share Cite
Suggested Citation:"6 Wrap-Up and Final Thoughts from Workshop Co-Chairs." National Academies of Sciences, Engineering, and Medicine. 2021. COVID-19 and the Present and Future of Black Communities: The Role of Black Physicians, Engineers, and Scientists: Proceedings of a Workshop. Washington, DC: The National Academies Press. doi: 10.17226/26146.
×

Members of the workshop Planning Committee shared concluding thoughts at the end of the workshop. Dr. Cora Marrett pointed to the willingness of participants who want to engage to find solutions, based on the questions asked and comments received throughout the day. She invited further input to the Roundtable after the workshop. She suggested the National Academies of Sciences, Engineering, and Medicine has a role to play. “This is an organization that says it is concerned about the well-being of the nation,” she said. “You can’t have well-being if you are leaving out segments of the population.”

Dr. Camara Jones reminded participants of the intentional structure of the workshop: from the big picture about COVID-19 (Chapter 2) to the disparate impact on Black communities (Chapter 3), to views from the National Academies (Chapter 4), to community response and resilience (Chapter 5). She noted several ideas she took from the workshop. First, she urged the National Academies to articulate a commitment to moving beyond descriptive and analytic research to call for the nation to do intervention research, which would call for investments in improving people’s lives. Second, she suggested the National Academies could play a role in convening experts to learn how to do real-time estimation of the burden of infection in communities, which would help trigger policies and actions quicker. Third, in recognition of the attention to structural racism, she asked if the National Academies could make a statement or convene a group that articulates that racism is a public health crisis. Another framing that she

said could come out of the National Academies, or from the Roundtable, would be the definition of health equity as assurance of the conditions to achieve optimal health for all people, or at least that health equity requires valuing all individuals and populations equally, recognizing and rectifying historical injustices, and providing resources according to need.

Dr. Marrett agreed about the importance of talking about racism and determining what the National Academies can do. “It’s one thing to say this, but what does it mean? What are the implications and actions?” She suggested laying out to the National Academies leadership and members the critical role that they can play to live up to the ideals that founded the Academies and that can be done through the auspices of the organization. She asked Roundtable staff director Reginald Hayes for his view on a role for the Roundtable and the National Academies. He noted that painful events are what precipitated a shift in public opinion, in addition to the decision to organize the workshop itself, which had not been part of the group’s original plan. He stressed, “We are here to be intersectional not just within the [National] Academies, not just within our walls, but to bring this information to the world en masse, and particularly to our community.”

Dr. Mark Alexander thanked the panelists, Roundtable chair Dr. Cato Laurencin, and participants in helping to craft public policy while working to eliminate the social disparities of health. As an example of the interrelated nature of the challenges, he pointed out that the Council of Black Health is working on an all-states initiative to prevent the expulsion of Black children in pre-K and kindergarten.

Dr. Laurencin thanked the co-chairs and National Academies staff. He said he appreciated that presenters throughout the day approached the topic from different angles and advocated for tackling different aspects, including from the perspective of the National Academies, the social and behavioral sciences, engineering, and the community.

Next: Appendix A: Workshop Agenda »
COVID-19 and the Present and Future of Black Communities: The Role of Black Physicians, Engineers, and Scientists: Proceedings of a Workshop Get This Book
× 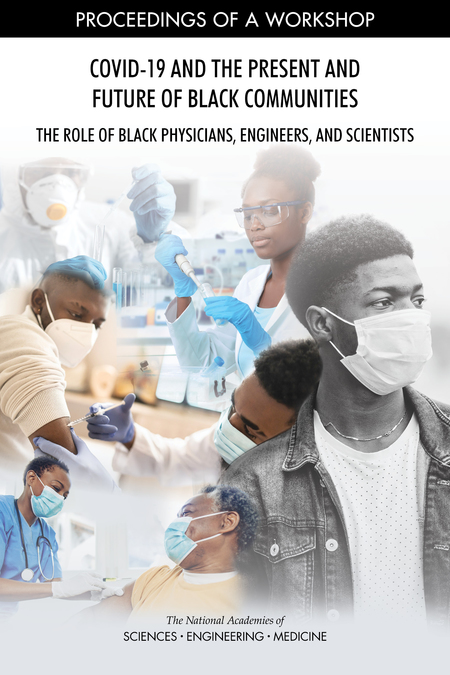 While the COVID-19 pandemic has had devastating health and economic impacts in the United States, communities of color, especially Black communities, have been disproportionately affected. On June 23, 2020, the Roundtable on Black Men and Black Women in Science, Engineering, and Medicine of the National Academies of Sciences, Engineering, and Medicine convened a virtual workshop to discuss the landscape of COVID-19, including how systemic racism contributes to the disproportionate effects related to infection rates and mortality of this virus and other health conditions. Presenters highlighted relevant research and creative responses from many perspectives, including how Black scientists, engineers, and doctors are contributing to solutions and are ready to do more. National Academies leaders and members also discussed the role of the National Academies in addressing the pandemic and underlying issues of systemic racism that have led to health disparities in the United States. This publication summarizes the presentation and discussion of the workshop.