Visit NAP.edu/10766 to get more information about this book, to buy it in print, or to download it as a free PDF.
« Previous: Chapter 2 - Legal and Regulatory Context for Airport P3 Transactions
Page 25 Share
Suggested Citation:"Chapter 3 - Case Studies." National Academies of Sciences, Engineering, and Medicine. 2021. Evaluating and Implementing Airport Privatization and Public-Private Partnerships. Washington, DC: The National Academies Press. doi: 10.17226/26179.
×

25 C H A P T E R 3 Introduction Summarizing key transactions as case studies allows decision-makers to extract lessons learned and best practices that may be relevant to their airportâs context. The goal of the case studies produced for this guidebook is to provide a holistic view of the implementation of P3s and privatization transactions at U.S. airports. Data collected for the case studies were derived from interviews with airport practitionersâ both public and privateâand publicly accessible documents, such as development or concession agreements, news reports, and other existing research. Research for the case studies included interviews to elicit the perspectives of the airport owner; project management team; technical/ legal/financial advisory team; investor consortia; and key stakeholders such as airlines, airport employees, airport stakeholder groups, and regulators. Interviews relied on a basic question structure to ensure consistency in each interview but also allowed for project-specific questions to better understand unique characteristics and decision-making steps. Direct quotations in the case studies are derived from public speeches and commentary provided to news outlets. Case studies were chosen based on many characteristics: airport size, contract value, the scope of work, delivery model, transaction size (total capital value of a contract at the time the trans- action closed), current status, and geographic location. Projects selected for review include P3s using private finance with an operation lease and privatizations. This guidebook endeavors to show a variety of contexts for and application of alternative delivery across the United States. Figure 4 shows a matrix of the case studies included in this guidebook as organized by these characteristics. The full narratives for each case study are provided in Appendix C of this guidebook. The case studies describe the airport and project context, the project elements, procurement process, and funding and financing used on the project. Throughout this guidebook, readers will find high- lights of best practices or lessons learned from each of the case studies. This chapter briefly summarizes the eight case studies selected from the 42 U.S. airport trans- actions identified, providing readers with a general context for the discussion of best practices and lessons learned from the case studies in Part II. Summary of Case Studies Austin South Terminal, Texas LoneStar Airport Holdings LLC holds a 40-year lease to operate the South Terminal at Austin- Bergstrom International Airport in Austin, Texas. The South Terminal is an existing, three-gate, Case Studies

Next: Part II - Implementing an Airport P3 »
Evaluating and Implementing Airport Privatization and Public-Private Partnerships Get This Book
× 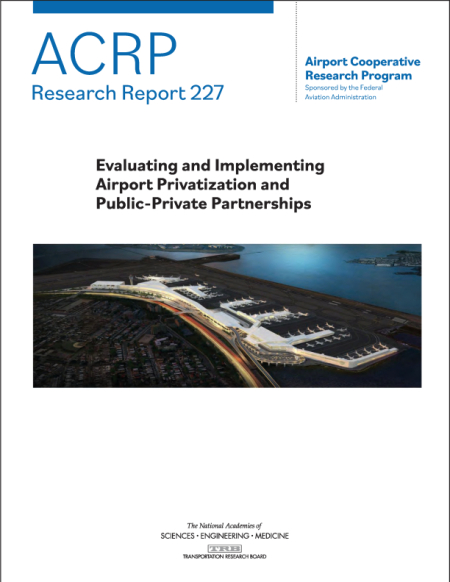 A public-private partnership (P3) can be a dynamic tool to help infrastructure owners achieve a range of objectives on projects, such as incorporating lifecycle project costs into decision-making, benefiting from innovation in design and construction techniques, or sharing certain performance risks.

Supplemental materials to the report include a Comparative Deal Matrix database, a website for the P3 Readiness Assessment, and a presentation that communicates research findings to key technical and non-technical industry stakeholders.