REPORT OF THE TREASURER OF THE NATIONAL ACADEMY OF SCIENCES For the Year Ended December 31, 2020

Next: Treasurer's Statement »
Report of the Treasurer for the Year Ended December 31, 2020 Get This Book
× 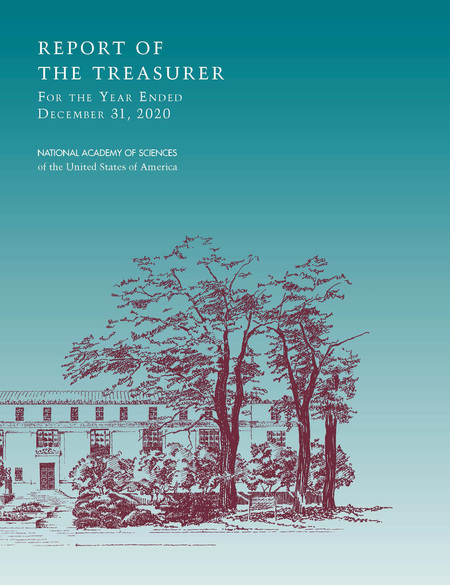 The income that supports the activities of the National Academy of Sciences(NAS) comes from two major sources: program revenue received from government and other sponsors to pay for the large number of studies and other activities undertaken each year by the National Research Council (NRC), and a much smaller sum that we withdraw from our own endowment under the endowment spending policies adopted by the Council.

This last year presented many challenges for the institution, as the COVID-19 pandemic began to effect operations in March 2020. At that time, the NAS/NRC decided to move to remote work for all staff and virtual meetings for committee and other convening activities. The move to virtual activity has been more successful than envisioned, with each part of the institution being able to operate surprisingly efficiently and effectively in such an environment. During the period from March through December 2020, the institution held hundreds of virtual webinars, workshops, lectures, and symposia, some with attendance into the thousands. The NRC released approximately 200 consensus studies, proceedings, and other publications during this period.

This Report of the Treasurer of the National Academy of Sciences presents the financial position and results of operations as well as a review of the endowment and other long-term investments portfolio activities of our Academy for the year ended December 31, 2020.