Get This Book
Visit NAP.edu/10766 to get more information about this book, to buy it in print, or to download it as a free PDF.
« Previous: 1 Introduction
Page 5 Share Cite
Suggested Citation:"2 Geoheritage Values and Visions." National Academies of Sciences, Engineering, and Medicine. 2021. America's Geoheritage II: Identifying, Developing, and Preserving America's Natural Legacy: Proceedings of a Workshop. Washington, DC: The National Academies Press. doi: 10.17226/26316.
×

In addition to the definition above, the GSA’s position statement on geoheritage notes that “geoheritage sites serve the public interest” and “are critical to advancing knowledge….” (GSA 2012, revised 2017). Presenters and workshop group participants explored why these sites are so important and how this prominence can be more widely conveyed to broader audiences. José Brilha, University of Minho (Portugal), stressed that geoheritage recognizes “special occurrences of minerals, rocks, fossils, soils, landforms, and geologically active processes with exceptional value [emphasis added].” Thomas Casadevall, U.S. Geological Survey (emeritus) and chair of the U.S. National Committee for Geological Sciences’ Advisory Group for Geoheritage, referred to a definition of geoheritage that recognizes “the connection between people, landscape, and earth history.”1 Notably, Casadevall, Brilha, and other speakers pointed to the multiple values embodied in geoheritage sites, related to the economic, scientific, health and well-being, and educational benefits. Steven Semken, Arizona State University, also emphasized the spiritual and emotional values that specific populations may connect with a place (see section on “Culture and Sense of Place” below for further detail).

One point that frequently emerged during the workshop was that many people are involved in geoheritage without knowing it. Several participants commented that their work in such areas as public outreach, tourism, and planning embodies geoheritage, yet they had not previously realized the existence of the field or their role in it. Several others noted that they integrate earth science and history in their teaching—again—without identifying what they do as geoheritage. Michael Barthelmes, Colorado State University, representing a focus group that discussed geoheritage vision, values, and principles in greater depth, noted that the lack of a common nomenclature is a challenge to greater acceptance of geoheritage’s underlying concepts (see Box 1). Many people, especially those in urban settings, do not see themselves connected to geology even as they read, watch movies, or play games with geological and geoheritage themes (e.g., Jurassic Park). This focus group suggested a plain language “elevator speech” to explain the connection between geology and past, present, and future human interactions. Geoheritage is an inclusive concept that “has room for many connections,” Barthelmes observed, because it lies at the intersection of science, society, and sustainability (see Figure 1). David Mogk, Montana State University, chair of the U.S. National Committee for Geological Sciences and chair of the workshop planning committee, noted in his workshop comments that geoheritage is a natural extension of our current understanding of Earth System Science. Geoheritage and Earth System Science look at Earth in a holistic manner, integrating across the “spheres” of the Earth, increasingly recognizing the feedback between biota and physical/chemical Earth processes, and increasingly aware of human impacts on, and by, Earth in the Anthropocene.

Many presenters and focus group spokespeople commented that “geoheritage” relates to several related concepts. The different terms and slightly different emphases among them, they suggested, confuse and perhaps dilute the overall impact in protecting the multiple values of these special areas. Frequently used, and sometimes mixed-and-matched, terms that surfaced during the workshop included the following:

The human element is critical in considering the conservation of natural landscapes, said Patty Limerick, University of Colorado, during the first webinar. She noted many (although not all) conservationists of the late 19th and early 20th centuries advocated that natural areas be as

empty of human activity as possible. When government officials and other decision makers agreed with this line of thought, local or indigenous populations were removed from newly designated parks or other protected areas, often forcibly.

During that webinar, Tim Badman, International Union of Conservation of Nature (IUCN), stressed how geodiversity and biodiversity are, and need to be, increasingly linked in nature conservation efforts (see section below). When most people think about the natural world, Limerick acknowledged, “rocks have been much less enshrined in popular thinking than plants and wildlife.” She suggested the need to “re-assemble the connections” and pointed to several opportunities. For example, Limerick said, geoheritage can serve to bridge science and the humanities.

Nonliving and living resources are often viewed separately in part because they are taught through separate academic disciplines, said Benjamin Tobin, Kentucky Geological Society. The focus group that discussed the integration of geodiversity and biodiversity suggested a focus on ecodiversity unites thinking about the biosphere and the geosphere in the Anthropocene Era.2 The group suggested short-term and long-term actions that include publishing and presenting about geoheritage in biodiversity and interdisciplinary journals and conferences, as well as more cooperation between public agencies charged with managing biological and geologic resources.

Next: 3 The U.S. Role in Global Geoheritage »
America's Geoheritage II: Identifying, Developing, and Preserving America's Natural Legacy: Proceedings of a Workshop Get This Book
× 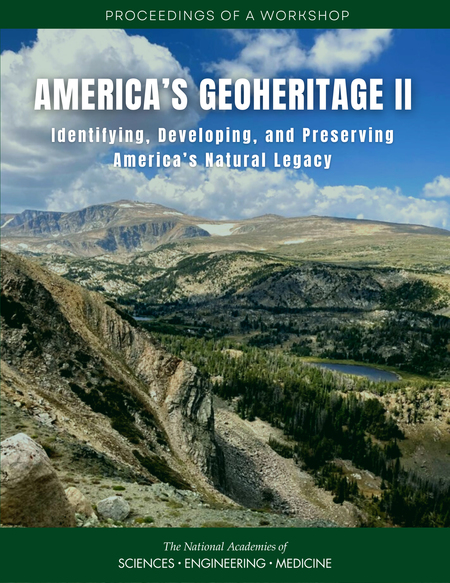 America is endowed with places that embody a rich geoheritage, from sites where indigenous people subsisted for millennia, to mines that furnished the raw materials that built U.S. industry, to mountain ranges and river gorges with unparalleled recreational opportunities, to field sites where students can truly understand a geological process, to places of aesthetic or spiritual value, and many more across all states and territories. In order to assess the status of geoheritage and the activities of its practitioners in the United States in light of social, political, and environmental changes over the past ten years, the National Academies of Sciences Engineering and Medicine convened a series of virtual webinars and a workshop. From September to December 2020, a Distinguished Speakers Webinar Program composed of eight webinars provided an overview of geoheritage initiatives, as well as focused presentations on geoheritage related to federal and state lands, cultural heritage, education, research, and economic development and geotourism. In January 2021, 101 land managers, state geologists, educators, researchers, and members and staff of professional societies and nongovernmental organizations participated in a virtual writing workshop to aggregate and organize community input on strategies and best practices in developing geoheritage sites across the United States. The participants were divided into focus groups that roughly aligned with the topics explored in the fall 2020 workshops. The groups worked synchronously and asynchronously over the course of a week, then presented their ideas in a plenary session. This publication summarizes the presentations and discussion of the webinars and workshop.