Get This Book
Visit NAP.edu/10766 to get more information about this book, to buy it in print, or to download it as a free PDF.
« Previous: Summary
Page 19 Share Cite
Suggested Citation:"1 Introduction." National Academies of Sciences, Engineering, and Medicine. 2022. Closing Evidence Gaps in Clinical Prevention. Washington, DC: The National Academies Press. doi: 10.17226/26351.
×

Clinical preventive services play an essential role in decreasing death and disability and improving the health of the nation. Preventive services such as breast cancer screenings, counseling on tobacco cessation, and preventive medication to decrease risk of HIV infection help to prevent certain diseases and, in some cases, enable early detection and treatment. The Patient Protection and Affordable Care Act (ACA), signed into law in 2010, required health plans to cover 100 percent of preventive services without charging patients for coinsurance, copayments, or deductibles. These services are identified as those that “provide coverage for a range of preventive services and may not impose cost-sharing” on patients receiving the services (KFF, 2015). Preventive services that are recommended by the U.S. Preventive Services Task Force (USPSTF), the Advisory Committee on Immunization Practices, the Health Resources and Services Administration (HRSA) (including HRSA’s Bright Futures Project), and the Institute of Medicine’s Committee on Women’s Clinical Preventive Services are all required to be covered at no cost to patients (HRSA, 2020).

The USPSTF has issued clinical practice guidelines (CPGs) since 1989, recommending for or against clinical preventive services, including screenings, behavioral counseling, and preventive medication. In addition to providing recommendations for or against the use of specific interventions, the USPSTF highlights current gaps in the evidence base for a particular topic. They do so in recommendation statements as well as I statements, which are issued for preventive services about which there is insufficient evidence to issue a recommendation. The USPSTF

In an effort to close evidence gaps in clinical prevention, the Agency for Healthcare Research and Quality (AHRQ) and the National Institutes of Health’s (NIH’s) Office of Disease Prevention (ODP) contracted with the National Academies of Sciences, Engineering, and Medicine to convene an ad hoc committee to evaluate evidence gaps described by the USPSTF and other CPG developers and create a taxonomy of the evidence gaps that the USPSTF and other CPG developers could use in future recommendations. Furthermore, the committee was asked to provide methods for prevention research funders and recommendation statement developers, including but not limited to NIH and the USPSTF, to improve their partnerships to accelerate research to close important gaps in prevention (see Box 1-1 for the complete Statement of Task).

At the committee’s first meeting, David Murray, director of ODP, characterized the challenges in addressing evidence gaps in two ways: nonspecific descriptions (e.g., “high-quality studies on the potential harms of screening and treatment are needed”) and discussion of evidence gaps in various places (Murray, 2020). Expressly stated was the hope to link evidence gaps with USPSTF criteria for study inclusion and coordinated efforts to describe and communicate evidence gaps so that they are easier to identify and address (Murray, 2020).

Arlene Bierman, director of AHRQ’s Center for Evidence and Practice Improvement, reinforced that the audience for the committee’s work was threefold: recommendation-making bodies, research funders, and researchers. Bierman also emphasized that the taxonomy and recommendations should account for the multiple dimensions of evidence gaps

An ad hoc committee of the National Academies of Sciences, Engineering, and Medicine will be convened to examine current issues in identifying and filling evidence gaps in U.S. Preventive Services Task Force (USPSTF) clinical prevention recommendations. As part of its work, the committee will:

(Bierman, 2020). Furthermore, discussions with AHRQ staff supporting the USPSTF and the USPSTF chair indicated that other goals for the committee are to provide immediate and long-term solutions that will help:

These discussions led the committee to understand that their taxonomy and recommendations should not be constrained by the history and current practices of the USPSTF.

After identifying the long-term outcomes expected from the efforts led by AHRQ, ODP, and the USPSTF, the committee worked backward to assess what role its report (including the taxonomy) would play in AHRQ’s and ODP’s goals to improve clinical prevention research by addressing evidence gaps. The committee believes that the taxonomy and report’s recommendations will play an important but singular part in this undertaking. Knowing that the long-term outcome is to identify and close evidence gaps in clinical prevention research (particularly those gaps informed by letter grade recommendations and I statements issued by the USPSTF) more quickly, the committee outlines the process it believes will ultimately lead AHRQ, ODP, and the USPSTF to this outcome in Figure 5-1 (see Chapter 5). The committee identifies the activities, outputs, and outcomes that are necessary to achieve this impact, including the use of the evidence gaps taxonomy and other recommendations made by the committee in this report. Because the vision incorporates activities and outputs defined in the recommendations in this report, the figure and full description can be found in Chapter 5.

Although the figure is neither strictly a logic model nor theory of change, it incorporates elements of both. The committee’s vision includes the overall linearity of a logic model, articulating activities, outputs, and outcomes, and acknowledging that many elements within those categories already exist or have already been implemented by AHRQ, ODP, or the USPSTF. The vision also includes the assumptions and indicators associated with theories of change “through which the outcomes and activities work to achieve the desired impact” (Breuer et al., 2015; De Silva et al., 2014, p. 3).

Bierman, A. S. 2020. Closing evidence gaps in clinical prevention: A perspective from AHRQ. Presented on December 15, 2020, at Meeting 1 of the Committee on Addressing Evidence Gaps in Clinical Prevention. https://www.nationalacademies.org/event/12-15-2020/addressing-evidence-gaps-in-clinical-prevention-committee-meeting-1-session-2 (accessed October 22, 2021).

Murray, D. 2020. Closing evidence gaps in clinical prevention: A perspective from the NIH. Presented on December 15, 2020, at Meeting 1 of the Committee on Addressing Evidence Gaps in Clinical Prevention. https://www.nationalacademies.org/event/12-15-2020/addressing-evidence-gaps-in-clinical-prevention-committee-meeting-1-session-2 (accessed September 15, 2021).

Next: 2 Clinical Practice Guidelines and the U.S. Preventive Services Task Force »
Closing Evidence Gaps in Clinical Prevention Get This Book
× 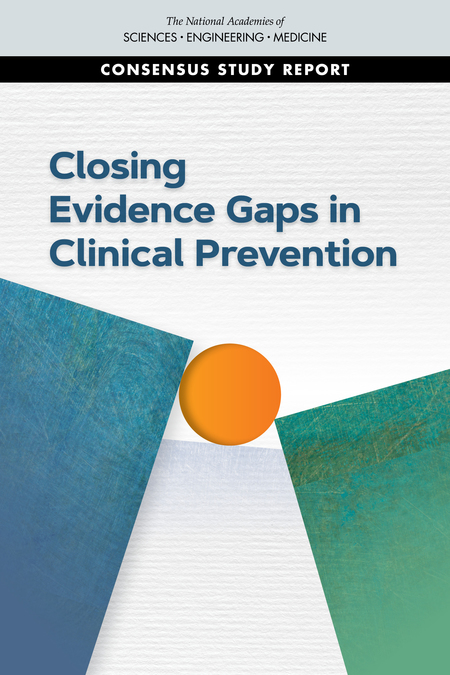 Closing Evidence Gaps in Clinical Prevention, a new consensus study report from the National Academies of Sciences, Engineering, and Medicine's Board on Population Health and Public Health Practice, evaluates evidence gaps in clinical prevention recommendations described by the United States Preventive Services Task Force and other clinical practice guideline developers and presents a taxonomy of these evidence gaps for future use. This report aims to improve the coordination of efforts to describe and communicate priority evidence gaps among funders and researchers. It also proposes new opportunities for collaboration among researchers, funders, and guideline developers to accelerate research that could close evidence gaps.

The authoring committee has also developed an interactive graphic that can be used as a workflow diagram for implementing the taxonomy. This workflow walks users through reviewing evidence, characterizing evidence gaps using relevant taxonomies, and developing a research agenda. Click here to view and engage with the interactive graphic.