Get This Book
Visit NAP.edu/10766 to get more information about this book, to buy it in print, or to download it as a free PDF.
« Previous: Appendix A: Statement of Task
Page 81 Share Cite
Suggested Citation:"Appendix B: Biographical Sketches of Planning Committee Members." National Academies of Sciences, Engineering, and Medicine. 2021. Identifying New Community-Driven Science Themes for NSF's Support of Paleoclimate Research: Proceedings of a Workshop. Washington, DC: The National Academies Press. doi: 10.17226/26377.
×

Andrea Dutton (Chair) is a professor in the Department of Geoscience at the University of Wisconsin–Madison. Dr. Dutton is an international expert in the study of past climate and sea-level change, using carbonate sedimentology and isotope geochemistry. Her research program focuses on understanding the rates, magnitudes, sources, and drivers of past sea-level change to facilitate improved understanding of the climate system and projections for the future. Dr. Dutton has served in leadership positions for several disciplinary working groups, and she served on the committee of the National Academies of Sciences, Engineering, and Medicine that produced the consensus report, A Vision for NSF Earth Sciences 2020-2030: Earth in Time (2020). She has also had an active role in science communication on climate change and sea-level rise. She is a MacArthur Fellow, a Fulbright Scholar, and a fellow of the Geological Society of America. Dr. Dutton received her M.S. and Ph.D. from the University of Michigan in Ann Arbor and was a postdoctoral fellow and research fellow at the Australian National University and a faculty member at the University of Florida before relocating to Wisconsin.

Tripti Bhattacharya is an early-career Asian American geoscientist specializing in paleoclimate dynamics and data-model integration. Dr. Bhattacharya received her B.S. in environmental science in 2010 from Georgetown University and her Ph.D. in geography in 2016 from the University of California, Berkeley. She subsequently was a postdoctoral researcher at the University of Arizona from 2016 to 2018. She has been an assistant professor at Syracuse University since August 2018. Her work focuses on using paleoclimate data, especially organic geochemical proxies of hydroclimate and temperature, to understand the drivers of regional climate change and to constrain sources of uncertainty in future climate projections. She has published in various scientific journals, including Nature Geoscience, Science, and Proceedings of the National Academy of Sciences.

Research Board of the National Academies of Sciences, Engineering, and Medicine (2014-2020). She is now serving as president of the Global Environmental Change section of the American Geophysical Union and president of the Quaternary Division of the Geological Society of America, and she is an elected fellow of both organizations. She has been conducting research in the Arctic for more than 40 years, including eight field seasons in remote parts of northeast Russia since 1991. After graduating with a B.A. in geology from Albion College, she completed her M.Sc. and Ph.D. at the University of Colorado and then served as a postdoctoral fellow in Bergen, Norway and at the University of Alberta before taking a faculty position at the University of Massachusetts-Amherst in 1987. Her research expertise is in Arctic marine and terrestrial sediment records of climate change over the last few million years, especially the history of Arctic sea ice, sea level, and western Arctic landscape change. This research directly addresses global climate change, the most critical problem facing species survival in our century. She led the $10M International Continental Scientific Drilling Program at Lake El’gygytgyn in Northeast Russia collecting a record of Arctic change over the past 3.6 million years. She has also been involved in the development of sea-ice proxies and the sea-ice history of the Bering Strait Region of the western Arctic. For several years she and collaborators have run a Research Experience for Undergraduates on Svalbard studying modern processes in front of tidewater glaciers. With new interests in public engagement and using science to inform policy on coastal management challenges with rising sea level, she is also engaged with indigenous people of Alaska through the Navigating the New Arctic Program of the National Science Foundation.

Christo Buizert is an assistant professor in the College of Earth, Ocean and Atmospheric Sciences at Oregon State University. His work aims to reconstruct and understand past climate change and atmospheric composition, using deep ice cores from Greenland and Antarctica. One of his main research interests is abrupt climate change of the last ice age (the Dansgaard–Oeschger cycle), and its impact on global climate, atmospheric circulation, and biochemistry. In 2012, Dr. Buizert obtained a Ph.D. in geophysics from the Niels Bohr Institute at the University of Copenhagen, Denmark. He has been awarded research grants through the Paleo Perspectives on Climate Change (P2C2) program of the National Science Foundation, and he has published many scientific papers on topics relevant to the program.

Natalie J. Burls is an associate professor in the Department of Atmospheric, Oceanic and Earth Sciences at George Mason University. Dr. Burls' research is focused on improving understanding of the key processes determining Earth’s

climate and climate variability on a variety of timescales, ranging from seasonal, to decadal, to much longer geological timescales. In particular, she is interested in the climatic role of ocean general circulation, ocean-atmosphere interaction, and cloud dynamics. Her research efforts acknowledge that to fully understand, model, and predict changes in climate characteristics that have a large impact on the Earth system and society (e.g., temperature and precipitation patterns), a coupled ocean-atmosphere perspective is needed–one that accounts for changes in important variables, such as the thermal structure of the slowly adjusting ocean. Complementing observations with theory, she endeavors to accompany complex simulations of climate phenomena with simple models capturing the essential dynamics required to explain unanswered questions within climate science. Dr. Burls received her Ph.D. in physical oceanography from the University of Cape Town in 2010. From 2011 to 2014, she worked as a postdoctoral associate in the Department of Geology and Geophysics at Yale University. She joined George Mason in January 2015.

Sarah Feakins is a professor in the Department of Earth Sciences at the University of Southern California. Her research focuses on past climate and vegetation change, using organic geochemical techniques. She has used knowledge of modern plants and sedimentary systems to document changes in ecosystems over millions of years, with samples collected by the International Ocean Discovery Program. She obtained her undergraduate degree in geography at the University of Oxford, her Ph.D. in earth sciences from Columbia University's Lamont-Doherty Earth Observatory, and she was a National Oceanic and Atmospheric Administration Global and Climate Change Postdoctoral Research Fellow at the California Institute of Technology. Dr. Feakins has authored over 60 peer-reviewed papers and book chapters, and she has 5 years’ experience as an associate editor for Geochimica et Cosmochimica Acta, Geophysical Research Letters, and Paleoceanography and Paleoclimatology. She participated in an earlier workshop of the National Academies of Sciences, Engineering, and Medicine, “The Earth System Context for Hominin Evolution.”

Isabel P. Montañez (NAS) is a Distinguished Professor and Chancellor’s Leadership Professor in the Department of Earth and Planetary Sciences at the University of California, Davis. Dr. Montañez is a paleoclimatologist whose research focuses on geologic archives of past atmospheric gas and ocean geochemical compositions and their linkages to climate and ecosystem changes. She received her Ph.D. from Virginia Polytechnic Institute in 1990. She is the recipient of several awards, including the James Lee Wilson Medal for

Excellence by a Young Scientist of the Society of Sedimentary Geology (SEPM), the Laurence L. Sloss Award from the Geological Society of America, the Jean-Baptiste Lamarck Medal from the European Geosciences Union, and the SEPM Francis J. Pettijohn Medal. She is a fellow of the American Geophysical Union, the Geological Society of America (GSA), the American Association for the Advancement of Science, and the California Academy of Sciences, as well as a past Fellow of the John Simon Guggenheim Memorial Foundation. She served as president of GSA from 2017 to 2018. She is a member of the National Academy of Sciences.

Kaustubh Thirumalai is an assistant professor in the Department of Geosciences at the University of Arizona. His primary professional expertise is in the area of paleoceanography and climate change and dynamics. He obtained his Ph.D. and M.S. at the University of Texas at Austin in 2016 and 2012 respectively, where he focused on Holocene paleoceanography of the Gulf of Mexico for his doctoral work and on statistical evaluations of El Niño Southern Oscillation reconstructions from individual foraminifera for his master’s thesis. Dr. Thirumalai subsequently spent a year as the Institute for Geophysics Institutional Postdoctoral Fellow from 2016-17, and then as a Presidential Postdoctoral Research Associate at Brown University from 2017-2019. He started as an assistant professor at Arizona in July 2019, and is the director of the Paleoceanography Laboratory. He serves as an Associate Editor for Paleoceanography and Paleoclimatology (AGU Wiley Journal) and has experience nominating individuals for awards.

Next: Appendix C: Workshop Agenda »
Identifying New Community-Driven Science Themes for NSF's Support of Paleoclimate Research: Proceedings of a Workshop Get This Book
× 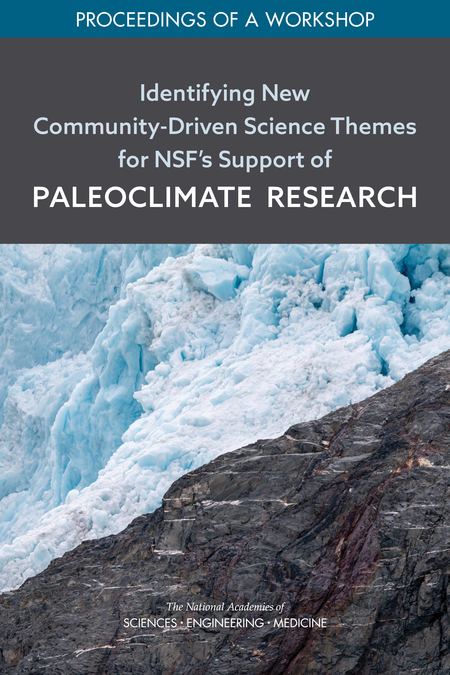 Sediments, ice, corals, and trees are just some of the natural storehouses of information that help tell the complicated history of Earth’s climate. Paleoclimate researchers use these “proxies,” in combination with numerical models, to gain understanding of the magnitudes, rates, and drivers of past climate variability with the goal of informing understanding of current and future change in Earth’s climate system. The Paleo Perspectives on Climate Change (P2C2) program of the National Science Foundation (NSF) has advanced paleoclimate research through proxy development, data-model comparisons, and synthesis work, and has facilitated interdisciplinary collaboration that has contributed to the growth of the field. This new publication highlights discussions at a June 2021 workshop that focused on identifying potential future paleoclimate research directions to further advance understanding of past climate and better inform the public and decision makers about the expected future.