Visit NAP.edu/10766 to get more information about this book, to buy it in print, or to download it as a free PDF.
Page i Share Cite
Suggested Citation:"Front Matter." National Academies of Sciences, Engineering, and Medicine. 2022. Physics of Life. Washington, DC: The National Academies Press. doi: 10.17226/26403.
×

Preface Every 10 years, the National Academies of Sciences, Engineering, and Medicine (the National Academies) survey the state of physics research in the United States. To make the task manageable, it is broken down by field, so that there are separate reports on astronomy and astrophysics; atomic, molecular, and optical physics; condensed matter and materials physics; elementary particle physics; nuclear physics; and plasma physics. In this cycle, for the first time, biological physics, or the physics of living systems, stands alongside these fields as part of physics. For many of us, this is a moment to celebrate. It is nearly 20 years since the National Science Foundation (NSF) launched a small program to support biological physics within its Physics Division. That effort has evolved into the Physics of Living Systems program. NSF is the sponsor of this survey, charging the committee to take a broad look at the field, its connections to other fields, and the challenges that the community faces in realizing the fieldâs potential (see Appendix A). Our work began at a meeting on February 6â7, 2020, with presentations from NSF staff, followed by a lively discussion. It is a pleasure to thank Krastan Blagoev, Denise Caldwell, and their colleagues for their support of the project and for their candor. We could not know, of course, that this would also be our last gathering, as the COVID-19 pandemic soon swept through the country and around the world. The February meeting was followed by a second meeting online, April 1â3, 2020. At these two events we heard from a number of colleaguesâchosen to complement the expertise of the committeeâ about the state of science and education in the field: Cliff Brangwynne, Lucy Colwell, Catherine Crouch, Jeff Hasty, Ted Hodapp, Sarah Keller, Chandralekha Singh, Xiaoliang Sunney Xie, and Xiaowei Zhuang. In addition we heard from representatives of other organizations and federal funding agencies beyond NSF, and about the federal budget process more generally, from Linda Horton (Department of Energy Office of Science), Matt Hourihan (American Association for the Advancement of Science), Peter Preusch (National Institute for General Medical Sciences, National Institutes of Health), and Elizabeth Strychalski (National Institute for Standards and Technology). Further insights into an important segment of our audience were provided by Mary Guenther and Alexis Rudd (Senate Committee on Commerce, Science, and Transportation) and by Dahlia Sokolov (House Committee on Science, Space, and Technology). All of these presentations led to significant discussion in the committee, and we appreciate the time and care taken by all of our speakers. A crucial part of the decadal survey process is community input. We solicited written input through the survey website, and held two town hall meetingsâone in person at the Biophysical Society Meeting in San Diego (February 16, 2020) and one online through the Division of Biological Physics of the American Physical Society (April 16, 2020). It was wonderful to hear from so many members of the community, speaking from many different perspectivesâfrom undergraduates attending their first scientific conferences and from senior faculty; from researchers in industry, research institutes, and medical schools; from faculty at community colleges, primarily undergraduate institutions, and research universities. As described in the report, it was exciting both to hear such a wide range of voices and to see the emergence of common themes. The work of the committee was done in the two meetings described above and a third (July 27â 29, 2020, also online), along with a series of 28 video conferences; there were numerous meetings of subgroups involved in generating first drafts of different chapters or addressing gaps in subsequent drafts. PREPUBLICATION COPY â SUBJECT TO FURTHER EDITORIAL CORRECTION ix

None of this would have been possible, especially in this challenging time, without the support of the NASEM staff, including Neeraj Gorkhaly, Amisha Jinandra, Steven Moss, Fran Sharples, and Linda Walker. Kim DeRose and Anne Johnson provided guidance on writing style and process. Throughout the project, Radaka Lightfoot managed the budget as plans were continually revised in response to the pandemic. At crucial moments James Lancaster came with excellent advice in his role as Director of the Board on Physics and Astronomy; late in the project he was succeeded by Colleen N. Hartman, who brought fresh eyes, insights, and enthusiasm. Very special thanks to Christopher Jones, who led this effort and provided both wise counsel and gentle reminders of the passing months. This report argues that breadth is an essential part of the excitement in biological physics. The physicistâs approach to understanding the phenomena of life is yielding fascinating results in contexts ranging from the folding of proteins to the flocking of birds, from the internal mechanics of cells to the collective dynamics of neurons in the brain, and more. We see glimpses of the sorts of unifying ideas that we hope for in physics, cutting across this huge range of scales. At the same time, each of these problems also connects to a larger community of biologists, sometimes reaching as far as applications in medicine and technology. Surveying all this required assembling a committee that represents a broad range of interests and expertise, and even so each of us had to stretch to be sure that we could, together, provide our readers with a sense for all of what is exciting in the field. As expected, it has been wonderful fun for all of us on the committee to talk about all these scientific developments. Less expected, perhaps, has been the pleasure of participating in the emergence of consensus on how our excitement about the science translates into recommendations about policy on matters of great concern to the community. The collective effort involved in producing this report has been substantial, especially in the context of the disruptions that all of us have experienced during the pandemic. I think I can speak for the whole committee in expressing thanks to the numerous colleagues, coauthors, friends, and family members who were patient and understanding with us during this time. Finally, let me exercise the chairâs prerogative and add a personal perspective. When I was a student, physicists who became interested in the phenomena of life were perceived as becoming biologists. Physicists and biologists agreed that there were productive applications of physics to biology, but the idea that living systems posed real challenges to our understanding of physics itself was not popular. I donât think that these views were fair to the history of the field, but they were widely held. Today, much has changed, both in the substance of what has been accomplished and in the perception of these accomplishments, especially by the physics community. The search for the physics of life now is a research program rather than a fantasy, and biological physics has emerged as a branch of physics. This happened not in one dramatic moment, but through decades of progress and gradual realizations. The result is nothing less than a redrawing of the intellectual landscape, the consequences of which continue to unfold in beautiful and sometimes surprising ways. I hope that we have done justice to these remarkable developments. William Bialek, Chair Committee on Biological Physics/Physics of Living Systems: A Decadal Survey PREPUBLICATION COPY â SUBJECT TO FURTHER EDITORIAL CORRECTION x

Acknowledgment of Reviewers This Consensus Study Report was reviewed in draft form by individuals chosen for their diverse perspectives and technical expertise. The purpose of this independent review is to provide candid and critical comments that will assist the National Academies of Sciences, Engineering, and Medicine in making each published report as sound as possible and to ensure that it meets the institutional standards for quality, objectivity, evidence, and responsiveness to the study charge. The review comments and draft manuscript remain confidential to protect the integrity of the deliberative process. We thank the following individuals for their review of this report: Catherine Crouch, Swarthmore College Robert Full, University of California, Berkeley Margaret Gardel, University of Chicago James C. Gumbart, Georgia Institute of Technology Judith Klinman, NAS, University of California, Berkeley Robert Phillips, California Institute of Technology Stephen Quake, NAS/NAE/NAM, Stanford University Elizabeth Strychalski, National Institute of Standards and Technology Kandice Tanner, National Cancer Institute Yuhai Tu, IBM T. J. Watson Research Center Although the reviewers listed above provided many constructive comments and suggestions, they were not asked to endorse the conclusions or recommendations of this report nor did they see the final draft before its release. The review of this report was overseen by Thomas Budinger, Lawrence Berkeley National Laboratory, and Herbert Levine, Northeastern University. They were responsible for making certain that an independent examination of this report was carried out in accordance with the standards of the National Academies and that all review comments were carefully considered. Responsibility for the final content rests entirely with the authoring committee and the National Academies. PREPUBLICATION COPY â SUBJECT TO FURTHER EDITORIAL CORRECTION xi

Next: Executive Summary »
Physics of Life Get This Book
× 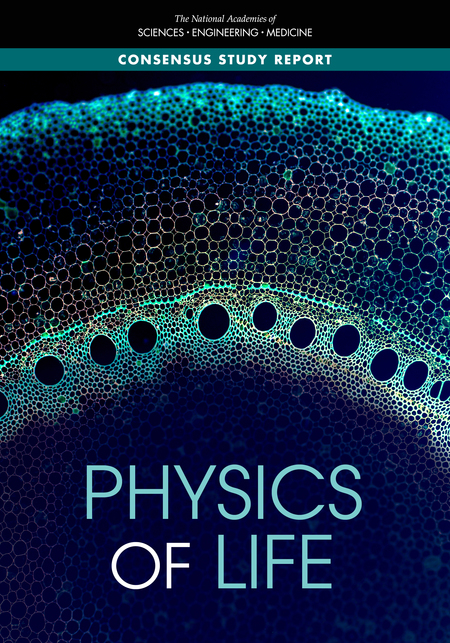 Biological physics, or the physics of living systems, has emerged fully as a field of physics, alongside more traditional fields of astrophysics and cosmology, atomic, molecular and optical physics, condensed matter physics, nuclear physics, particle physics, and plasma physics. This new field brings the physicist's style of inquiry to bear on the beautiful phenomena of life. The enormous range of phenomena encountered in living systems - phenomena that often have no analog or precedent in the inanimate world - means that the intellectual agenda of biological physics is exceptionally broad, even by the ambitious standards of physics.

Physics of Life is the first decadal survey of this field, as part of a broader decadal survey of physics. This report communicates the importance of biological physics research; addresses what must be done to realize the promise of this new field; and provides guidance for informed decisions about funding, workforce, and research directions.