Review of the Continued Analysis of the Supplemental Treatment Approaches of Low-Activity Waste at the Hanford Nuclear Reservation: Review #1 (2022)

Chapter:Appendix C: List of Relevant Factors for Consideration in the FFRDC's Analysis

Get This Book
Visit NAP.edu/10766 to get more information about this book, to buy it in print, or to download it as a free PDF.
« Previous: Appendix B: Statement of Task
Page 19 Share Cite
Suggested Citation:"Appendix C: List of Relevant Factors for Consideration in the FFRDC's Analysis." National Academies of Sciences, Engineering, and Medicine. 2022. Review of the Continued Analysis of the Supplemental Treatment Approaches of Low-Activity Waste at the Hanford Nuclear Reservation: Review #1. Washington, DC: The National Academies Press. doi: 10.17226/26423.
×

List of Relevant Factors for Consideration in the FFRDC’s Analysis

Based on the committee’s reading of Sec. 3125 of the FY2021 National Defense Authorization Act (NDAA) and Sec. 3134 of the FY2017 NDAA, the following are relevant factors, criteria, and elements for consideration in the FFRDC Analysis (the letters and numbers refer to relevant parts of Sec. 3125 and Sec. 3134; the text below is thus the committee’s compilation of the points from the two pieces of legislation):

(c)(1) The most effective potential technology for supplemental treatment of low-activity waste that will produce an effective waste form, including an assessment of the following:

(A) The maturity and complexity of the technology;

(B) The extent of previous use of the technology;

(C) The life cycle costs and duration of use of the technology;

(D) The effectiveness of the technology with respect to immobilization;

(E) The performance of the technology expected under permanent disposal;

(F) The topical areas of additional study required for the grout option identified in the analysis required by Sec. 3134:

(A) The risks of the [three] approaches … relating to treatment and final disposition.

(B) The benefits and costs of such approaches.

(C) Anticipated schedules for such approaches, including the time needed to complete necessary construction and to begin treatment operations

(2) The differences among approaches for the supplemental treatment of low-activity waste considered as of the date of the [FFRDC] analysis.

(3) The compliance of such approaches with the technical standards described in section 3134(b)(2)(D).

(4) The differences among potential disposal sites for the waste form produced through such treatment, including mitigation of radionuclides, including technetium-99, selenium-79, and iodine-129, on a system level.

(5) Potential modifications to the design of facilities to enhance performance with respect to disposal of the waste form to account for the following:

(6) Approximately how much and what type of pretreatment is needed to meet regulatory requirements regarding long-lived radionuclides and hazardous chemicals to reduce disposal costs for [technetium-99, selenium-79, and iodine-129].

(8) Other relevant factors relating to the technology described in paragraph (1), including the following:

(A) The costs and risks in delays with respect to tank performance over time.

(B) Consideration of experience with treatment methods at other sites and commercial facilities.

(C) Outcomes of the test bed initiative of the Office of Environmental Management at the Hanford Nuclear Reservation.

Next: Appendix D: Other Issues for Consideration in the Forthcoming FFRDC Report »
Review of the Continued Analysis of the Supplemental Treatment Approaches of Low-Activity Waste at the Hanford Nuclear Reservation: Review #1 Get This Book
× 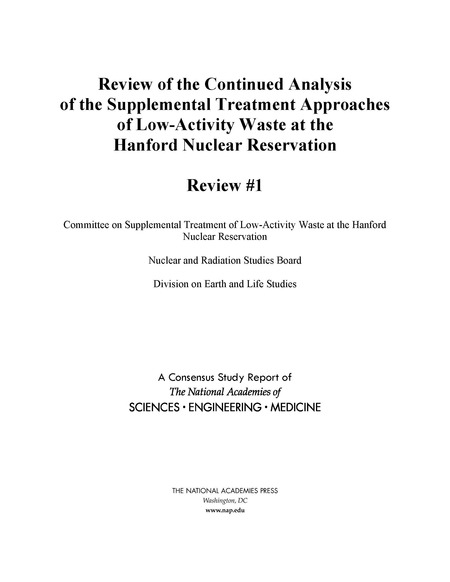 The Hanford Nuclear Reservation, where about two-thirds of the nation's weapons plutonium was produced from 1944 to 1987, is the site of the largest and most complex nuclear cleanup challenge in the United States. Section 3125 of the National Defense Authorization Act for Fiscal Year 2021 calls for a Federally Funded Research and Development Center (FFRDC) to develop a framework of decisions to be made among the supplemental treatment technologies, waste forms, and disposal locations for low-activity waste in the Hanford tanks. In addition, Section 3125 calls for the National Academies of Sciences, Engineering, and Medicine to provide a concurrent, independent peer review of the ongoing FFRDC analysis. This review report, the first of three to address the Congressional mandate, focuses on the technical quality and completeness of the FFRDC's draft framework.