Guidebook on Conducting Airport User Surveys and Other Customer Research (2021)

Visit NAP.edu/10766 to get more information about this book, to buy it in print, or to download it as a free PDF.
« Previous: Part III - Developing a Customer Research Program
Page 218 Share
Suggested Citation:"Glossary." National Academies of Sciences, Engineering, and Medicine. 2021. Guidebook on Conducting Airport User Surveys and Other Customer Research. Washington, DC: The National Academies Press. doi: 10.17226/26444.
×

220 Guidebook for Conducting Airport User Surveys and Other Customer Research Confidence interval A range above and below the estimated value that may be expected to contain the true value with a known probability. The known probability is referred to as the level of confidence. For example, a 95% confidence interval implies that if 100 samples were taken, we would expect the confidence interval to contain the true population value in all but five cases. Dataset Data, which are usually stored electronically, collected in a parti- cular survey. Estimate The value of a measure of some characteristic of the population that is determined from the sample. Estimation The process of producing an estimate. Mean The average of the values of a particular characteristic of indi- viduals in the population. Median A measure that identifies the middle-point value (or 50th per- centile) in a set of values when they are arranged in order of magnitude. Thus, 50% of the sample is greater than this value, and 50% is smaller. Mode The most common value of a particular characteristic in a sample. Multistage sampling A sample that is selected in stages, where the sampling units at each stage are subsamples from the previous stage. Nonprobability sampling A sampling selection method where it is not possible to determine the probability of individuals being selected. Nonproportional stratified sampling A sampling method where different sampling fractions are used to improve the accuracy of estimates for a given overall sample size. Percentage points Refers to the numerical value of a variable that is expressed as a percentage. For example, a range of 50% Â±5Â percentage points is equivalent to the range 45% to 55%. Population The target population is the entire group of individuals about which information is desired. The survey population is the group of individuals that have a chance of being selected for the sample. The survey population should ideally be identical to the target population but may not be exactly the same in practice. Probability sample A sample selected in such a way that each individual in the popu- lation has a non-zero chance of being included and, in principle, the probability can be calculated. Proportional stratified sampling A sampling method where the proportions of individuals in each group sampled (referred to as the sampling fractions) are equal. Random sampling A probability sample selection method where each member of the population has an equal probability of selection. Sample A subset of the population that is chosen to be representative of the total population and that can therefore be used to make generalizations about the population. Sample mean The average of the values of a particular characteristic of indi- viduals in a sample.

Glossary 221Â Â  Sample size The number of individuals composing the sample. Sample variance Sample variance of a particular characteristic is a measure of the spread, or dispersion, of values of that characteristic within a set of sample data. Sampling fraction The ratio of the sample size to the population size. Sampling frame A list of all members of a population used as a basis for sampling. Sampling plan Also referred to as âsample designâ or âsurvey design,â the sam- pling plan specifies the type of sampling to be used (e.g., single or multistage, random, sequential, stratified, cluster sampling), the definitions of strata or clusters, and the sample size. Sequential sampling Also known as âsystematic sampling.â A probability sampleâ selection method in which the sample is obtained by selecting every nth individual in the population, where n is an integer greater than 1. The first member of the sample must be selected randomly within the first n units. Standard deviation A measure of the spread or dispersion of a set of data. It is calcu- lated by taking the square root of the variance. The more widely the values are spread out, the larger the standard deviation. Standard error of the estimate (SEE) A measure of the amount of sampling error present. The SEE is an estimate of the standard deviation of the sample mean based on the sample data. Stratified sampling A probability sampleâselection method in which the population is divided into homogeneous groups (strata), and members of each strata are sampled, possibly using different sampling methods. Systematic sampling See âsequential sampling.â Variance A measure of the spread or dispersion of a set of data. It is calcu- lated by summing the square of the difference between each value and the mean value of the data. Surveying Terms Categorical question A type of closed-ended question that allows respondents to select one or more predefined responses. Census Survey of the total population of interest. Closed-ended question A type of survey question that has a finite set of answers pre- determined by the researcher from which the respondent chooses. Easy to standardize and lends itself to statistical analysis. Coding The process of converting answers to questions into numerical form (codes) to facilitate compilation of survey statistics. Computer-aided personal interviewing The use of an electronic device programmed with a survey ques- tionnaire, including interviewer instructions, to interview people in person. Interview types to which this technique applies include on-site intercepts and in-office interviews. Computer-assisted telephone interviewing The use of a computer to support telephone interviews by display- ing questions and allowing the interviewer to enter responses.

222 Guidebook for Conducting Airport User Surveys and Other Customer Research Electronic data-collection device An electronic unit, such as a personal digital assistant, that can be programmed to display survey questions and allow responses to those questions to be entered and stored in the unit. See âcomputer-aided personal interviewing.â Intercept interview A type of interview survey where respondents are approached (or intercepted) in high-traffic locations. Internet survey See online survey. Interviewer A person who collects information from individuals in the sample by conversing with the individual. Interviewer bias A type of non-sampling error caused by the interviewer. Errors may include influencing the respondent in some way, asking questions in the wrong order, or using different phrasing or tone of voice than other interviewers, as well as intentional errors such as fraudulent data entry. Mail survey A survey methodology in which the questionnaire is distributed to the target sample by mail. Multiple-choice question A type of closed-ended question that allows respondents to select the most appropriate answer from among a set of possible answers. Good for profiling respondents. Mystery shopper survey A type of survey that anonymously evaluates customer service, operations, employee integrity, merchandising, and product quality of concessions and service providers. Non-representative sample This type of sample occurs when the characteristics of respon- dents in a survey do not match those of the desired target population. Numerical question A type of closed-ended question that allows respondents to give a numerical value. Example: What is your current age? Online survey A survey method in which respondents complete a questionnaire online. Advantages include rapid response rate, low cost, and increased respondent flexibility. Also called an âInternet surveyâ or âweb-based survey.â Open-ended question A type of survey question to which there are no predefined responses. Allows respondents to answer in their own words. Used in exploratory research. Pilot survey A small trial run, or rehearsal, of the entire survey process com- pleted before the actual survey commences. The intention is to alert the survey team to any difficulties that were not anticipated at the survey planning stage. Pilot surveys are conducted after pretests. Pretest A small trial run of questions or the questionnaire to be used in the survey. The intention is to alert the survey team to problems with the questions such as confusing wording, inappropriate responses, additional responses to closed-ended questions, incorrect flow of questions, and inappropriate length or format of questionnaire. Respondent A person who is providing responses to a survey.

Glossary 223Â Â  Response bias Difference in the mean of the characteristics of interest between survey respondents and the population being surveyed. Sample bias This type of bias may result if the sample is limited only to respondents within a certain demographic group (e.g., highly educated). If the survey goal is to measure the opinions of the general population, this could bias the sample. Self-administered survey A survey in which respondents complete the questionnaire themselves. Also called a âself-completed survey.â Self-completed survey See âself-administered survey.â Survey codebook A document prepared by the survey planning team to code responses to questions in the survey. This document could be used as an aid in the data entry process or could be incorporated into the data entry software. Survey implementation team Team responsible for conducting the field work, performing data entry, and validating and cleaning the data. Survey method Method used to collect the survey data (e.g., intercept or tele- phone interviews or self-completed questionnaires handed out or distributed via mail or email). Survey planning team A team of people responsible for the design, conduct, and reporting of results. Includes the project manager, survey technical expert, survey sample design expert, data analyst, survey logistics manager, and survey administrator. Surveyor A person who collects information from or about individuals in the sample by observation or by interview. Telephone survey A survey methodology in which respondents are interviewed by telephone. Advantages include broad reach to potential respon- dents and that interviewers can ask clarifying questions. Web-based survey See âonline survey.â Other Useful Glossaries Insights Association Marketing Research Glossary: https://www.insightsassociation.org/issues-policies/glossary Modern Marketing Partners, Glossary of Market Research Terms: https://www.modernmarketingpartners.com/2014/12/05/glossary-market-research-terms/ Organization for Economic Cooperation and Development Glossary of Statistical Terms: https://stats.oecd.org/glossary Quirkâs Media Glossary: https://www.quirks.com/search/glossary

Next: Acronyms and Abbreviations »
Guidebook on Conducting Airport User Surveys and Other Customer Research Get This Book
× 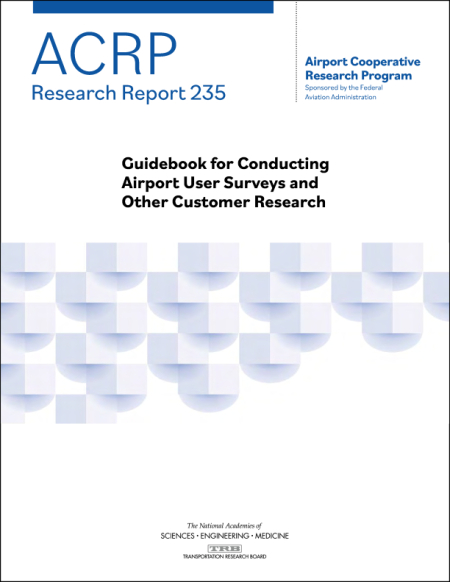 Airport user surveys have traditionally been used to obtain information for facility planning. More recently, however, surveys are being used to measure satisfaction as a way to identify actions that could improve the customer experience and increase non-aeronautical revenues, particularly those from passenger terminal concessions.

Supplementary to the report is Appendices A through L.