The Limits of Recidivism: Measuring Success After Prison (2022)

Visit NAP.edu/10766 to get more information about this book, to buy it in print, or to download it as a free PDF.
Page i Share Cite
Suggested Citation:"Front Matter." National Academies of Sciences, Engineering, and Medicine. 2022. The Limits of Recidivism: Measuring Success After Prison. Washington, DC: The National Academies Press. doi: 10.17226/26459.
×

THE NATIONAL ACADEMIES PRESS 500 Fifth Street, NW Washington, DC 20001 This activity was supported by contracts between the National Academy of Sciences and the Arnold Foundation (19-02953). Any opinions, findings, conclusions, or recommendations expressed in this publication do not necessarily reflect the views of any organization or agency that provided support for the project. International Standard Book Number-13: 978-0-309-XXXXX-X International Standard Book Number-10: 0-309-XXXXX-X Digital Object Identifier: https://doi.org/10.17226/26459 Additional copies of this publication are available from the National Academies Press, 500 Fifth Street, NW, Keck 360, Washington, DC 20001; (800) 624-6242 or (202) 334-3313; http://www.nap.edu. Copyright 2022 by the National Academy of Sciences. All rights reserved. Printed in the United States of America Suggested citation: National Academies of Sciences, Engineering, and Medicine. 2022. The Limits of Recidivism: Measuring Success After Prison. Washington, DC: The National Academies Press. https://doi.org/10.17226/26459. Prepublication copy, uncorrected proofs

Preface The recidivism rate is a statistical institution in the criminal legal system. It is widely used by policymakers, practitioners, and researchers to refer to the crimes, convictions, and reincarceration of people released from prison. It is the default benchmark for determining the effectiveness of policies and programs to prevent post-release criminal behavior. From the beginning, however, the recidivism rate has had its critics, who argue that it is based on defective data and is commonly misinterpreted and misapplied.1 Arnold Ventures asked the National Academies of Sciences, Engineering, and Medicine to convene an expert committee to conduct a critical analysis of recidivism and, as needed, propose alternative measures of success for the more than 600,000 persons who reenter society each year after leaving prison. This report is the culmination of the committeeâs deliberations. The use of the term âsuccessâ in the committeeâs charge is telling. It reverses the focus on failure that defines the recidivism rate. The committee was asked to consider the multiple meanings and measures of success after prison in addition to the cessation of criminal behavior. We took this charge literally and have devoted extensive attention in our report to measures of post-release progress and improvement across multiple life domains, including physical and mental health, employment, housing, family attachment and community involvement. Our research and presentations by subject matter expertsâparticularly those by persons with lived experience of incarceration and the practitioners who work with themâconvinced us that a sense of hope, efficacy, and overall wellbeing is of fundamental importance for successful reentry after prison. The challenge is to develop and validate measures of personal wellbeing that are both reliable and sufficiently flexible to encompass the diverse experiences, backgrounds, and identities of those leaving prison. Our analysis of recidivism also poses the same kind challenge. The recidivism critics, we concluded, are essentially correct: We must move beyond the recidivism rate to adequately measure post-release criminal behavior, which will require reversing the polarity of recidivism from failure to success. In this regard, the committee undertook an extensive review of the research literature on desistance from crime. We were struck by the difference between recidivism and desistance. Recidivism is often operationalized as a binary, either-or, measure of post-release outcomes: You were either rearrested, reconvicted, or reincarcerated after leaving prison, or you were not. By contrast, desistance indicates a gradual process that, like recovery from addiction, illness or disease, can involve relapses. From the vantage point of recidivism, committing a new crime is a mark of failure. From a desistance perspective, committing fewer or less serious crimes is a sign of movement toward desistance. Our review led us to conclude that the concept of desistance more accurately depicts the realities of criminal behavior and its cessation and that measures of desistance should augment the recidivism rate. Measures of recidivism, when used, need to be applied with greater precision. Policymakers, practitioners, researchers, and other users should specify whether recidivism reflects rearrest, conviction, or incarceration and clarify the limitations of such measures. Â Â Â Â Â Â Â Â Â Â Â Â Â Â Â Â Â Â Â Â Â Â Â Â Â Â Â Â Â Â Â Â Â Â Â Â Â Â Â Â Â Â Â Â Â Â Â Â Â Â Â Â Â Â Â Â Â Â Â Â  1 See, for example, Michael Maltzâs (2001[1984]) groundbreaking study. Pre-Publication Copy, Uncorrected Proof ix

Little in our analysis of the limitations the recidivism rate is new. Part of our task was to review and draw conclusions from the quite extensive literature on recidivism. We were also charged, however, with formulating recommendations based on our conclusions. In this respect, we broke some new ground. We do not propose that our conclusions about measuring recidivism or the correlates of successful reentry be taken as the last word on these demanding topics. On the contrary, we recommend that foundations and federal agencies use them as points of departure for extensive evaluation of the kinds and quality of the data underlying current recidivism measures and the development of uniform standards for measuring desistance from crime and successful reentry in life domains including but not limited to the criminal legal system. We recognize that this is a tall order and that, even if our recommendations are taken up by private and government stakeholders, it may be years before they issue their own findings and recommendations. Therefore, the question arises: What is to be done in the mean time? We urge that everyone who cares about what happens to the people who pass through the nationâs prisons and reads this report ask themselves the same questions we did as we were writing it: Do current measures of recidivism tell us what we need to know about success after prison? How can we do better? Richard Rosenfeld, Chair Committee on Evaluating Success Among People Released from Prison Â  Â  Â  Pre-Publication Copy, Uncorrected Proof x

We also extend our gratitude to the staff of the National Academies of Sciences, Engineering, and Medicine. Briana Smith provided key administrative and logistical support to ensure that the committee process ran efficiently, as well as providing essential support in preparing the report for publication. Ellie Grimes made critical substantive contributions to the committeeâs information gathering and literature review. Emily Backes provided guidance at every stage of the study process, along with contributing to the writing and editing of the report. Throughout the project, Natacha Blain, director of the Committee on Law and Justice, provided oversight. From the Division of Behavioral and Social Sciences and Education, we thank Kirsten Sampson Snyder and Douglas Sprunger, who expertly shepherded the report through the review process and assisted with its communication and dissemination. We thank librarian Anne Marie Houppert in the National Academies Research Center for her crucial assistance with fact- checking. We also thank Marc DeFrancis for his skillful editing. This Consensus Study Report was reviewed in draft form by individuals chosen for their diverse perspectives and technical expertise. The purpose of this independent review is to provide candid and critical comments that will assist the National Academies of Sciences, Engineering, and Medicine in making each published report as sound as possible and to ensure that it meets the institutional standards for quality, objectivity, evidence, and responsiveness to the study charge. The review comments and draft manuscript remain confidential to protect the integrity of the deliberative process. We thank the following individuals for their review of this report: Kristofer Bucklen (Planning, Research, and Statistics, Pennsylvania Department of Corrections), Adam Gelb (Office of the President and CEO, Council on Criminal Justice), Beth Huebner (Department of Criminology and Criminal Justice, University of Missouri-St. Louis), Michael Jacobson (Institute for State and Local Governance and Sociology Department, CUNY Graduate Center), Pamela Lattimore (Research Development, Division for Applied Justice Research, RTI International), Magnus Lofstrom (Criminal Justice, Public Policy Institute of California), Giovanni Mastrobuoni (Public and Labor Economics, Collegio Carlo Alberto) (James P. Lynch, Criminology and Criminal Justice Department, University of Maryland), Ellen W. Clayton (Center for Biomedical Ethics and Society, Vanderbilt University). Although the reviewers listed above provided many constructive comments and suggestions, they were not asked to endorse the conclusions or recommendations of this report nor did they see the final draft before its release. The review of this report was overseen by James Lynch, Department of Criminology and Criminal Justice, University of Maryland and Ellen Wright Clayton, Vanderbilt Law School. They were responsible for making certain that an independent examination of this report was carried out in accordance with the standards of the National Academies and that all review comments were carefully considered. Responsibility for the final content rests entirely with the authoring committee and the National Academies. Richard Rosenfeld, Chair Amanda Grigg, Study Director Committee on Evaluating Success Among People Released from Prison Pre-Publication Copy, Uncorrected Proof xii

Next: Summary »
The Limits of Recidivism: Measuring Success After Prison Get This Book
× 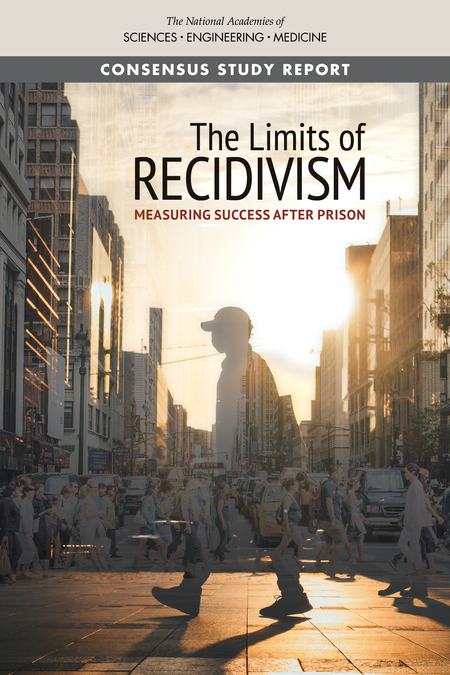 Nearly 600,000 people are released from state and federal prisons annually. Whether these individuals will successfully reintegrate into their communities has been identified as a critical measure of the effectiveness of the criminal legal system. However, evaluating the successful reentry of individuals released from prison is a challenging process, particularly given limitations of currently available data and the complex set of factors that shape reentry experiences.

The Limits of Recidivism: Measuring Success After Prison finds that the current measures of success for individuals released from prison are inadequate. The use of recidivism rates to evaluate post-release success ignores significant research on how and why individuals cease to commit crimes, as well as the important role of structural factors in shaping post-release outcomes. The emphasis on recidivism as the primary metric to evaluate post-release success also ignores progress in other domains essential to the success of individuals returning to communities, including education, health, family, and employment.

In addition, the report highlights the unique and essential insights held by those who have experienced incarceration and proposes that the development and implementation of new measures of post-release success would significantly benefit from active engagement with individuals with this lived experience. Despite significant challenges, the report outlines numerous opportunities to improve the measurement of success among individuals released from prison and the report’s recommendations, if implemented, will contribute to policies that increase the health, safety, and security of formerly incarcerated persons and the communities to which they return.