Visit NAP.edu/10766 to get more information about this book, to buy it in print, or to download it as a free PDF.
« Previous: Chapter 1 - Introduction
Page 4 Share
Suggested Citation:"Chapter 2 - Research Background." National Academies of Sciences, Engineering, and Medicine. 2022. Primer and Framework for Considering an Airport Noise and Operations Monitoring System. Washington, DC: The National Academies Press. doi: 10.17226/26527.
×

4 This Primer includes an overview of the history of NOMSs in the United States, the current status of NOMS operations (including general NOMS features and functions), resource require- ments for the operation of a NOMS, and potential funding sources for acquisition. The Primer also includes case studies of airports that have installed a NOMS and airports that elected to use other tools such as stand-alone flight tracking systems, handheld noise meters, off-the-shelf spreadsheet software, city complaint tools, and paper records. Lastly, this Primer includes a strategic decision framework designed to help airports thoughtfully review the quantitative and qualitative benefits and costs of acquiring, maintaining, and updating a NOMS. 2.1 Literature Review The research team gathered and reviewed documentation related to the regulations, guidelines, and standards regarding the application, funding, and operations of a NOMS. The synthesized information is meant to provide the reader of this Primer with information on the regulations applicable to such a system, best practice guidance documents, a summary of technical litera- ture published in recent years on topics relevant to current systems, and a summary of FAA guidance on noise measurements. This literature review is included in AppendixÂ A: Literature Review. There is no comparison of NOMS products in AppendixÂ A, nor does this appendix address the multitude of vendor and consultant literature that can be readily found online, as this literature is not peer reviewed. 2.2 Airport NOMS Questionnaire The research team developed questionnaires to gather information from U.S. airports on the following: â¢ Types and approximate number of airports using a NOMS, â¢ Types of data being collected, â¢ How NOMSs are being used, â¢ Degree of public access, â¢ Resource requirements, â¢ Funding sources, â¢ Reasons for acquiring or not acquiring a NOMS, and â¢ Quantitative and qualitative benefits. The questionnaires were divided between airports that operate a NOMS and airports that do not operate a NOMS in the 50 states and the territories, including American Samoa, Guam, the Northern Mariana Islands, Puerto Rico, and the U.S. Virgin Islands. The questionnaires were based on the following milestones in the life cycle of the airport NOMS experience: C H A P T E R 2 Research Background

Next: Chapter 3 - NOMS Overview »
Primer and Framework for Considering an Airport Noise and Operations Monitoring System Get This Book
× 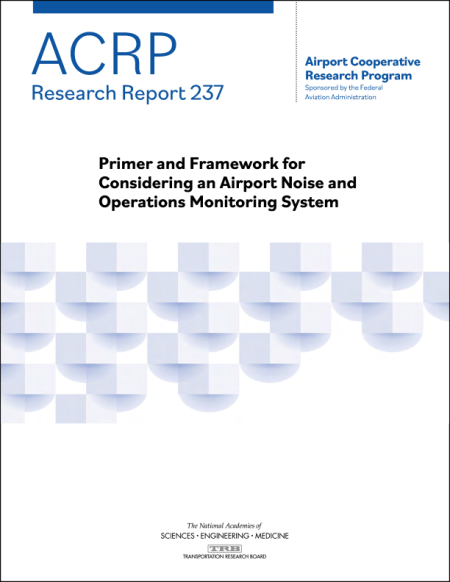 Supplemental to the report are Appendices A though K.