Understanding the Quality of the 2020 Census: Interim Report (2022)

Visit NAP.edu/10766 to get more information about this book, to buy it in print, or to download it as a free PDF.
Page i Share Cite
Suggested Citation:"Front Matter." National Academies of Sciences, Engineering, and Medicine. 2022. Understanding the Quality of the 2020 Census: Interim Report. Washington, DC: The National Academies Press. doi: 10.17226/26529.
×

â¢ PREPUBLICATION COPYâUncorrected Proofs â¢ THE NATIONAL ACADEMIES PRESS 500 Fifth Street, NW Washington, DC 20001 The project that is the subject of this report was supported by the U.S. Census Bureau through a task order under Contract No. 1333LB21D00000003. Support of the work of the Committee on National Statistics is provided by a consortium of federal agencies through a grant from the National Science Foundation (No. SES-1024012). Any opinions, findings, conclusions, or recommendations expressed in this publication do not necessarily reflect the views of the organizations or agencies that provided support for the project. International Standard Book Number-13: XXX-X-XXX-XXXXX-S International Standard Book Number-10: S-XXX-XXXXX-X Digital Object Identifier: https://doi.org/10.17226/26529 Additional copies of this publication are available from the National Academies Press, 500 Fifth Street, NW, Keck 360, Washington, DC 20001; (800) 624-6242 or (202) 334- 3313; http://www.nap.edu. Copyright 2022 by the National Academy of Sciences. All rights reserved. Printed in the United States of America Suggested citation: National Academies of Sciences, Engineering, and Medicine. (2022). Understanding the Quality of the 2020 Census: Interim Report. Washington, DC: The National Academies Press. https://doi.org/10.17226/26529.

â¢ PREPUBLICATION COPYâUncorrected Proofs â¢ Acknowledgments The Panel to Evaluate the 2020 Census wishes to thank the many people who have contributed to its work during its first year of operation and to this first report. We appreciate the support of the Census Bureau, under the acting di- rectorship of Ron Jarmin, and its encouragement of independent, external review of the 2020 Census. Karen Deaver has been a fine collaborator as primary information conduit between the panel and the Census Bureau, and the panel has benefited from the interest and actions of Albert Fontenot and Deborah Stempowski as heads of the decennial census directorate. We have also benefited greatly from interactions with key Census Bureau staff in John Abowd, Maryann Chapin, Jennifer Ortman, and Victoria Velkoff. Beyond those already named, we appreciate the contributions of Census Bureau staff who presented and discussed material with the panel during its open meetings, including: Tamara Adams, Willette Allen, Robin Bachman, Dominic Beamer, Judy Belton, Christine Flanagan Borman, Patrick Cantwell, Richard Denby, Jason Devine, Daniel Donello, Dora Durante, Monique Eleby, Christine Hartley, Michael Hawes, Kristen Hearns, Joan Hill, Cynthia Davis Hollingsworth, Eric Jensen, Andrea Johnson, Timothy Kennel, Sarah Konya, Julia Lopez, Barbara LoPresti, Nicholas Jones, Frank McPhillips, Rachel Marks, RJ Marquette, Leanna Mayo, Thomas Mule, Roberto Ramirez, Jennifer Reichert, Rita Schuler, Kathleen Styles, Ben Taylor, Kevin Zajac, and Mary Frances Zelenak. At our August 30, 2021, meeting, we benefited from a roundtable discussion with several members of the 2020 Census field staff. Though identified and selected by the Census Bureauâs Field Divisionâthe group was not intended to constitute a completely representative sample of the 2020 Census field experienceâthe staffers were nonetheless candid and informative in describing their experiences. The five participants in this session (with at least one of the vii

â¢ PREPUBLICATION COPYâUncorrected Proofs â¢ viii ACKNOWLEDGMENTS titles they held during the conduct of the 2020 Census) were: Diana Harris Cannon, area census office manager (ACOM) in DeKalb County, Georgia; Jon Hallingstad, ACOM in Allentown, Pennsylvania; Robert Lee, census field manager and area manager in Queens, New York; Robert Leibowitz, area manager for nonresponse follow-up in Maine, New Hampshire, and Vermont; and Robert Toth, also ACOM in Allentown before becoming area manager in Harrisburg, Pennsylvania, area. We are grateful for their insights. We join our Census Bureau colleagues in mourning the untimely passing of James Treat, most recently the senior advisor for decennial affairs at the Census Bureau, in October 2021. He was a stalwart contributor to and facilitator of numerous census-related activities of the Committee on National Statistics (CNSTAT), andâthough he did not have extensive interaction with our panelâ it was inevitable that we would have been in frequent touch regarding his work on initial visions and planning for the 2030 Census. It is a great loss that this is no longer possible. We also benefited greatly from a briefing and discussion with Nancy Potok and John Thompson after the release of the American Statistical Associationâs Task Force on Census Quality Indicators at the panelâs third meeting. In particular, we appreciate conversations with Paul Biemer, RTI International, who was engaged along with our colleague Joseph Salvo as primary data analyst for the task force. At our fourth meeting, we invited a small group of select census stakeholders to share their initial impressions on the conduct and quality of the 2020 Census, and very much appreciate their contributions to our work: Clark Bensen, POLIDATA Political Data Analysis; Kimball Brace, Election Data Services, Inc.; Susan Brower, Minnesota State Demographer; Gwynne Evans-Lomayesva, National Congress of American Indians; Eric Guthrie, Minnesota State Demographic Center and formerly Michigan State Demographer; and Bill OâHare, OâHare Data and Demographic Services. The COVID-19 pandemic affected not only the careful planning of the Census Bureau, but the timeline and working conditions for this panel as well. We could not have done this work without a helpful and dedicated staff. Many members of the CNSTAT and National Academies staff facilitated our work. Constance Citro, senior scholar, offered us wise counsel at every point and participated in all our sessions. Her knowledge and experience with the census proved invaluable to us. Michael Cohenâs assistance to the data analysis subgroup has been critical to their progress. Katrina Baum Stone is bringing her experience with several federal statistical agencies to bear on our work on the census. Anthony Mann handles panel logistics, not a simple task given the need for all meetings to be virtual, with various members and interviewees having connectivity issues and time zone constraints. Brian Harris-Kojetin, as the CNSTAT director, has served as the lead contact on the Census Bureau contract and has offered us helpful information at timely moments.

â¢ PREPUBLICATION COPYâUncorrected Proofs â¢ ACKNOWLEDGMENTS ix Our heartiest thank-you goes to Daniel Cork, the study director, who has had to deal with the minutiae of multiple subtopics, shifting data points, and often conflicting suggestions from the panelists and others. His candor, objectivity, and perseverance made this interim report possible. This Consensus Study Report was reviewed in draft form by individuals chosen for their diverse perspectives and technical expertise. The purpose of this independent review is to provide candid and critical comments that will assist the National Academies of Sciences, Engineering, and Medicine in making each published report as sound as possible and to ensure that it meets the institutional standards for quality, objectivity, evidence, and responsiveness to the study charge. The review comments and draft manuscript remain confidential to protect the integrity of the deliberative process. We thank the following individuals for their review of this report: Russel E. Caflisch, Courant Institute of Mathematical Sciences, New York University; Dowell Myers, Population Dynamics Research Group, Sol Price School of Public Policy, University of Southern California; Barbara Entwisle, Carolina Population Center, University of North Carolina at Chapel Hill; Ivan P. Fellegi, retired, Statistics Canada; Sunshine Hillygus, Duke Initiative on Survey Methodology, Duke University; Mario Marazzi, former executive director, Puerto Rico Institute of Statistics; Nicholas N. Nagle, Department of Geography, University of Tennessee, Knoxville; Christine Pierce, U.S. Media Operations, Nielsen; Allison Plyer, Office of Chief Demographer, The Data Center, New Orleans, Louisiana; and Lance Waller, Department of Biostatistics and Bioinformatics, Rollins School of Public Health, Emory University. Although the reviewers listed above provided many constructive comments and suggestions, they were not asked to endorse the conclusions or recom- mendations of this report nor did they see the final draft before its release. The review of this report was overseen by Susan Hanson, Department of Geography, Clark University, and Susan A. Murphy, Department of Statistics, Harvard University. They were responsible for making certain that an independent examination of this report was carried out in accordance with the standards of the National Academies and that all review comments were carefully considered. Responsibility for the final content rests entirely with the authoring committee and the National Academies. Teresa A. Sullivan, Chair Panel to Evaluate the Quality of the 2020 Census

â¢ PREPUBLICATION COPYâUncorrected Proofs â¢ Contents Summary 1 1 Introduction 11 1.1 The Panel, Its Charge, and Its Operations 15 1.2 Data Analysis Subgroup 20 1.3 Overview of This Report 20 2 Frameworks for Understanding the Decennial Census and Its Quality 23 2.1 Types of Error in a Decennial Census 23 2.2 What Is The Decennial Census? Census Quality in the Context of Census Data Uses and Purposes 27 2.3 How Census Error and Census Data Quality May Be Assessed 32 3 Other Evaluations of the 2020 Census 37 3.1 JASON Review of 2020 Census Data Quality Processes 38 3.2 American Statistical Association Task Force on 2020 Census Quality Indicators 40 3.3 Census Bureauâs Operational Quality Metric Releases 44 3.4 Panelâs Assessment 51 4 Initial Conclusions and the Path Ahead 53 4.1 Initial Conclusions on the 2020 Census 53 4.2 The Path Ahead for Assessing the 2020 Census 58 References 63 Appendixes 67 xi

Next: Summary »
Understanding the Quality of the 2020 Census: Interim Report Get This Book
× 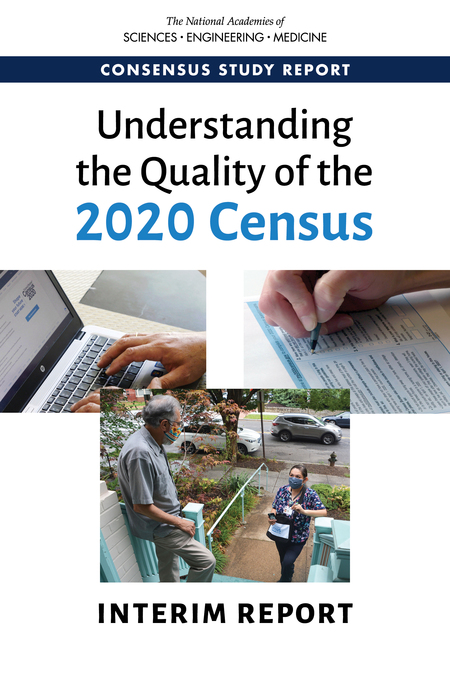 The decennial census is foundational to the functioning of American democracy, and maintaining the public's trust in the census and its resulting data is a correspondingly high-stakes affair. The 2020 Census was implemented in light of severe and unprecedented operational challenges, adapting to the COVID-19 pandemic, natural disasters, and other disruptions. This interim report from a panel of the Committee on National Statistics discusses concepts of error and quality in the decennial census as prelude to the panel’s forthcoming fuller assessment of 2020 Census data, process measures, and quality metrics. The panel will release a final report that will include conclusions about the quality of the 2020 Census and make recommendations for further research by the U.S. Census Bureau to plan the 2030 Census.