Fare-Free Transit Evaluation Framework C-1 Appendix C Community Representative Interview Methodology and Results Methodology The project team conducted interviews with staff from community-based organizations and transit advocacy groups to gather information on perspectives of fare-free transit from various transit stakeholders. Additionally, the project team solicited feedback on how transit agencies can integrate community representative feedback into the fare-free transit evaluation process. The project team leveraged existing connections with community representatives in Chicago and elsewhere in the US to solicit feedback from eight organizations. Initially, the team focused on advocacy organizations that are also members of the Transportation Equity Network (TEN), a coalition of community organizations in the Chicagoland region that work with decision-makers to embed racial equity and mobility justice into transportation via community-driven decisions and investments. These organizations conduct advocacy and research work throughout the Chicagoland region, as well as other parts of the United States. The knowledge and familiarity of disparities faced by black, indigenous, and people of color (BIPOC) and disabled residents, as well as disinvested communities, equips them with the ability to understand and represent the needs and challenges of these communities. The organizations included in the first round of interviews included: ï§ Metropolitan Planning Council (Chicago, IL): Works in the Chicago region and focuses on affordable housing; equitable development; transportation; water, environment, and sustainability; effective government. ï§ Access Living (Chicago, IL): Service center and advocate for persons with disabilities, also ran by persons with disabilities. Work statewide. ï§ Equiticity (Chicago, IL): Provides programming and advocacy for racial equity and mobility justice in the region and nationally. ï§ University of Illinois at Chicago, Urban Transportation Center (Chicago, IL) Conducts interdisciplinary transportation research in Chicago and nationwide. Also

Fare-Free Transit Evaluation Framework C-2 serves as an advocate and partner to various local community organizations advocating for transportation equity and mobility justice. Following the interviews with TEN member organizations, the project team organized interviews with community-based organizations and transit advocacy groups in other cities across the country. Some of these organizations are located in cities where fare-free transit has been evaluated or implemented. Other organizations have been vocal in conversations around fare-free transit. The organizations in this round of interviews included: ï§ Miami Transit Alliance (Miami, FL): A non-profit organization advocating for walkable streets, bikeable neighborhoods and better public transit in Miami-Dade County. ï§ Willowbrook Inclusion Network (Los Angeles, CA): A non-profit community planning and workforce development social enterprise. ï§ Virginia Conservation Network (Richmond, VA): Coordinates over 150 environmental organizations in the conservation community to protect natural resources. ï§ TransitCenter (New York, NY): Organization that works to improve transit in order to make cities more just and environmentally sustainability. Key Findings This section includes a summary of the findings from the interviews with staff from community-based organizations and transit advocacy groups. Goals of Fare-Free Transit ï§ Many interviewees see fare-free transit as a conversation that should be taking place in their cities, but do not see fare-free transit as a one-size-fits-all solution. ï§ Fare-free transit can fit in with other local advocacy efforts, such as sustainability, easing traffic congestion, increased mobility options, connections to economic hubs/workforce development, and helping the most vulnerable populations. Full vs. Partial Fare-Free ï§ Some advocates call for focusing fare-free transit efforts in communities or on modes that are most used by vulnerable populations (low income, BIPOC, disabled, students/youth). ï§ In Chicago, fare-free transit would be particularly valuable for low-income riders in order to allow transit agencies to continue collecting fares from those who can afford to pay.

Fare-Free Transit Evaluation Framework C-3 ï§ In Richmond, fare-free transit would be beneficial for all riders due to large population of low-income residents in the city. Balance of Service Quality and Affordability ï§ Some advocates shared concerns that fare-free transit would lead to funding shortages at transit agencies which could result in lower transit service quality. ï§ One advocate was vocal that if transit agencies and decision makers are looking to improve access and mobility in their communities, then increasing service quality is a more effective way to do that. Fare-free transit seems like any easy strategy for politicians and transit advocates that do not have to directly deal with the repercussions of loss of funding. ï§ One advocate was concerned that fare-free transit would provide transit agencies with an excuse to not meet Americans with Disabilities Act (ADA) requirements for access to transit. They felt that those with disabilities would prefer for transit systems to be accessible to those with disabilities rather than be free. ï§ Some advocates had concerns about fare-free transit related to increased behavioral issues on the buses that would lead to people with disabilities feeling unsafe. Funding Solutions ï§ Fare revenue cannot be guaranteed when ridership is declining so existing fare collection methods may not be sustainable ï§ While collecting fares can be regressive (i.e., low-income riders spend a greater percentage of income on transit fares than higher income riders), replacing fares with equally or more regressive funding, such as sales or gas taxes, can be similarly regressive. Some advocates suggested that fares could be replaced with funding sources that are more equitable, such as a graduated income tax or by partnering with large institutions and private businesses. Engaging the Community ï§ Many advocates mentioned that conversations around fare-free transit should be made in close consultation with community partners. ï§ Transit agencies should partner with local community groups to disseminate information to their audiences if they implement fare-free transit. ï§ Community groups should be compensated for their time and effort in conducting the direct outreach.

Fare-Free Transit Evaluation Framework C-4 ï§ When soliciting feedback about fare-free transit from stakeholders and the public, advocates believed it was important to make people aware of the potential trade-offs at the transit agency. ï§ It may be difficult to gauge whether riders prefer fare-free transit or improved service quality. Many riders who would benefit from free fares the most may not have the time or means to share feedback through traditional outreach methods. 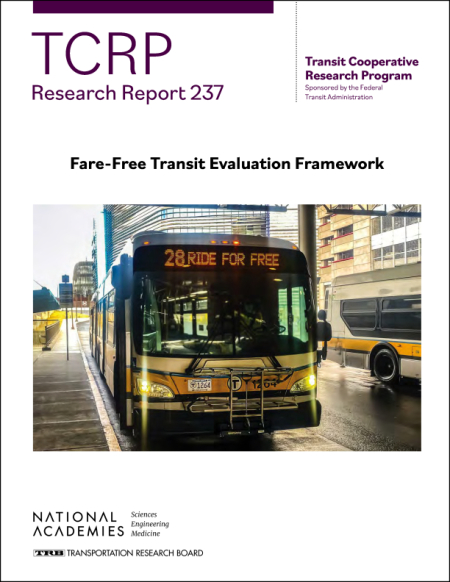 Supplemental to the report is an Infographic.