Get This Book
Visit NAP.edu/10766 to get more information about this book, to buy it in print, or to download it as a free PDF.
Page i Share Cite
Suggested Citation:"Front Matter." National Research Council. 1994. Violence in Urban America: Mobilizing a Response. Washington, DC: The National Academies Press. doi: 10.17226/4419.
×

Summary of a Conference

Committee on Law and Justice

Office of the Deputy Secretary, U.S. Department of Education

Office of the Secretary, U.S. Department of Health and Human Services

Department of Psychology, University of Illinois at Chicago

Office of Policy Development and Research, U.S. Department of Housing and Urban Development

Department of Sociology, University of Chicago

Office of the Under Secretary, U.S. Department of Education

COMMITTEE ON LAW AND JUSTICE

Center for Law and Society, University of California, Berkeley

Panel on the Understanding and Control of Violent Behavior

The violence now occurring within our cities is a national scourge. The fact that minority youth are disproportionately its victims makes it a tragedy and a disgrace as well. For mayors seeking to establish civil, secure communities, no problem seems more urgent.

Yet, what to do remains uncertain.

The problem is not necessarily in the "science base" that society can draw on in searching for plausibly effective interventions. There are plenty of theories about the causes of violence, and no small number of facts useful in testing those theories. (For a complete survey, see Understanding and Preventing Violence.) And every day science is making progress in clarifying the theories and testing them against empirical evidence.

The problem, instead, lies in converting hypotheses about potential causes of violence into operational programs that have some prospect of success in reducing one or more aspects of the violence problem and that could be adopted and effectively implemented by hard-pressed communities and governmental organizations. In short, the problem lies in the domain of "action science" rather than "basic science."

To help deal more effectively with violence as it happens in today's cities and to accelerate the growth of the "action science" underlying violence prevention efforts, the National Research Council and the Kennedy School of Government teamed up to organize a special kind of conference. The conference design was based on several different principles.

First, we focused attention on what should be done rather than what

was known. To do this, we gave people a case study to consider in which the problem of violence in a particular city, along with its first moves to begin solving it, were laid out.

Second, we looked at the problem from the vantage point of a particular governmental actor—a mayor. That was based more on a judgment about where the problem lies than what was the most effective level at which to take action. We remained open to the idea that to deal with the problem effectively, action might be required at other levels of government.

Third, we sought to combine the knowledge and experience of academics and practitioners; community activists as well as government officials; officials from the federal as well as local governments; officials from many different functional areas of government, ranging from maternal and child health to prosecutors and correctional administrators.

The ultimate aim of the conference was not only to advance the learning of the people who attended, but also to create a record of the thoughts, ideas, and proposals that emerged. How well we succeeded in this effort, we leave to the reader to judge.

What success we did achieve in both stimulating and organizing practical thought about how best to deal with violence in the cities owes a great deal to the organizers and participants. We owe a particular debt to four sets of individuals whose contributions made the greatest difference. First is the mayors, who gave generously of their valuable time both in advising on the structure of the conference and as key participants. Both as leading representatives of their communities and, we believe, as thoughtful innovators, they brought unique perspectives to the conference: Stephen Goldsmith, Indianapolis, Indiana; John Norquist, Milwaukee, Wisconsin; Edward G. Rendell, Philadelphia, Pennsylvania; Kurt L. Schmoke, Baltimore, Maryland; and Paul Tauer, Aurora, Colorado.

The second group are the rapporteurs, who were instrumental in shaping the conference and working as partners with the mayors in the management of the five task forces: Philip J. Cook, Duke University; Francis X. Hartmann, Harvard University; Michael Smith, Vera Institute of Justice, Inc.; Cathy Spatz Widom, State University of New York, Albany; and Jeffrey A. Roth, Abt Associates Inc. Third, we are indebted to the federal agency officials who advised on the structure of the conference and were invaluable as participants; their names are found in the list of participants. And fourth, the event and this publication would not have been possible without the efforts of the staff of the National Research Council's Commission on Behavioral and Social Sciences and Education: Susanne A. Stoiber, director, Jeffrey A. Roth, consultant, and Nancy A. Crowell, research associate, of the Division on Social and Economic Studies; and Eugenia Grohman, associate director for reports.

Finally, we are also extremely grateful to the foundations and govern-

ment agencies that supported this activity: the Harry Frank Guggenheim Foundation and the Centers for Disease Control and Prevention of the U.S. Department of Health and Human Services sponsored and funded the conference, and the National Institute of Justice of the U.S. Department of Justice sponsored the case study discussed in this report and reprinted in Appendix A.

Next: Part 1 Introduction »
Violence in Urban America: Mobilizing a Response Get This Book
× 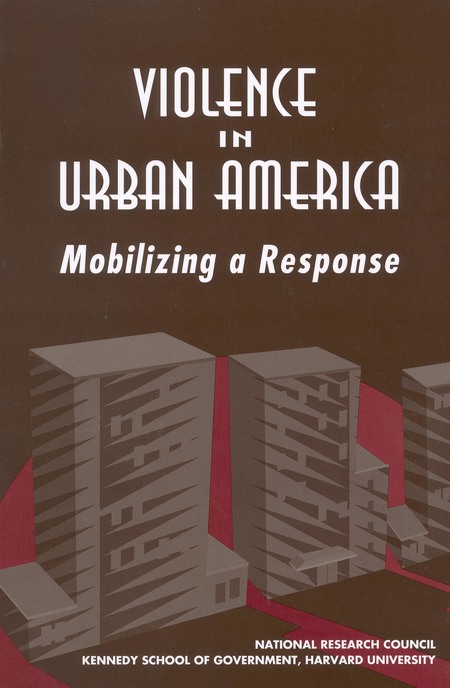 In this summary of a unique conference on urban violence, mayors, police chiefs, local, state, and federal agency experts, and researchers provide a wealth of practical ideas to combat violence in urban America. This book will be a valuable guide to concerned community residents as well as local officials in designing new approaches to the violence that afflicts America's cities.