Get This Book
Visit NAP.edu/10766 to get more information about this book, to buy it in print, or to download it as a free PDF.
« Previous: Robert F. Gilkeson
Page 84 Share Cite
Suggested Citation:"Charles P. Ginsburg." National Academy of Engineering. 1994. Memorial Tributes: Volume 7. Washington, DC: The National Academies Press. doi: 10.17226/4779.
× 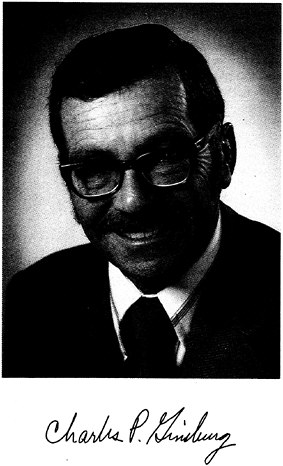 WRITTEN BY PETER HAMMAR SUBMITTED BY THE NAE HOME SECRETARY

CHARLES P. GINSBURG, the man who led Ampex Corporation's development of the world's first practical videotape recorder, died at his Eugene, Oregon, home on April 9, 1992. He was seventy-one.

Ginsburg was born in San Francisco and diagnosed with diabetes at the age of four, just two years after insulin was discovered. He lived a normal childhood and graduated from Lowell High School.

Electronics was not his first career choice. He entered the University of California, Berkeley, as a premedical student but transferred to the Davis campus two years later to study animal husbandry. Out of money, he dropped out in 1940 and began work at a series of jobs that eventually steered him into the field where he made his mark sixteen years later.

In 1942 he worked as a sound technician for Harry McCune Sound Services, and from 1943 to 1947 as a studio and transmitter engineer at Associated Broadcasters, Inc., both in San Francisco. It was also during this time that he entered San Jose State College, where he earned a B.A. degree in 1948 in engineering and mathematics. From 1947 to 1952 he worked as a transmitter engineer at Station KQW (now KCBS-AM), San Francisco.

It was there in 1951 that he received a telephone call from Alexander Poniatoff, founder and president of Ampex Cor

poration, the small Redwood City, California, company that had introduced professional audiotape to American radio five years earlier. Poniatoff thought Ginsburg could lead a project to create a magnetic tape machine to record television. He was put in charge of a six-member research team that went head-to-head with giants such as RCA and other large electronics companies pursuing the same objective. Ginsburg put together a team consisting of Charles Anderson, Ray Dolby, Shelby Henderson, Alex Maxey, and R. Fred Pfost.

These Ampex engineers found the answer to practical video recording. Instead of ''muscling" the tape at high speed past fixed heads, the team used the idea that originally came from Marvin Camras at Armour Research Foundation in Chicago—mounting heads on a rotating wheel that moved the heads rapidly past the slow-moving tape. Starting in 1952 the Ampex team overcame major design obstacles, including head design and wear, head-to-head tracking, and the use of frequency modulated (FM) signal processing. Augmenting the work of Ginsburg and Dolby, the first two team members, were Maxey's mechanical design and his other contributions, Anderson's FM video signal processor, and Pfost's work on recording and playback heads. Their developments included the then-slow tape speed of 15 inches per second (38 cm/s), resulting in a twelve-inch diameter reel of videotape having the amazing recording length of one hour.

A 3M team in St. Paul, Minnesota, under William Wetzel, provided Ampex with the first videotape, a special two-inch-wide tape needed for the new recording technology. This basic formulation was to become the first commercial videotape, Scotch Number 179. By 1956 the prototype transverse scan black-and-white videotape recorder, the Ampex Mark IV, was ready to show to the world.

On Wednesday, November 30, 1956, the nightly CBS newscast, "Douglas Edwards and the News," was recorded at CBS Television City in Hollywood on the Ampex videotape recorder (VTR) for later tape-delayed broadcast to West Coast cities. The fifteen-minute program had been recorded two hours earlier from a network land feed on an Ampex VRX-1000 VTR. The

scheduled tape-delayed playback marked the first regularly scheduled broadcast use of the remarkable device. The event would prove one of the most significant technical breakthroughs in the coming global information revolution.

The demonstration of this practical magnetic tape recorder of TV signals was an event of enormous importance to the TV broadcasting industry. The invention made possible instant playback techniques that have become integral to television, reduced production time by many hours, permitted rapid editing, and increased the flexibility in presenting news and other programs. All analog videocasette recorders stem from those first Ampex video recorders. Ampex received an Emmy in 1957 from the Academy of Television Arts and Sciences in recognition of the development of the first practical videotape recorder.

Ginsburg was elected a member of the National Academy of Engineering in 1973, being cited for invention and pioneering development of video magnetic tape recording for instant playback. Other honors included the David Sarnoff Award for Outstanding Achievement in Radio and Television of the Society of Motion Picture and Television Engineers (SMPTE) in 1957, Vladimir K. Zworykin Award of the Institute of Radio Engineers (1958), Valdemar Poulsen Gold Medal from the Danish Academy of Technical Sciences (1960), Howard N. Potts Medal from the Franklin Institute (1969), Citation from the 6th International Symposium (1969), Master Designer Award from Product Engineering Magazine (1969), John Scott Award from the City of Philadelphia Board of Directors of Trusts, Video Achievement Award from the former International Tape/Disc Association (1975), and Citation from the International Television Symposium of Montreux (1975). In 1990 he was inducted into the National Inventors Hall of Fame, where he was credited with leading "one of the most significant technological

advances to affect broadcasting and program production since the beginning of television itself.''

He served as a member of many video magnetic recording standardization committees, including those of the Society of Motion Picture and Television Engineers, the Acoustical Society of America, and international standardization groups. He served the Society of Motion Picture and Television Engineers as chairman of its Study Group on Digital Television. This group was charged with determining the technical and economic feasibility of the transition to a completely digital operation throughout all of the facilities in a television broadcasting plant, up to the input to the transmitter.

Ginsburg has a number of publications to his credit, including "A New Magnetic Video Recording System," in Journal of SMPTE, May 1956, and "Comprehensive Description of the Ampex Video Tape Recorder," in that same journal in April 1957. He received seven U.S. patents and thirty-two foreign patents.

He was a fellow of the Society of Motion Picture and Television Engineers and of the Institute of Electrical and Electronics Engineers. In 1971 he was made a life fellow member of the Franklin Institute of the State of Pennsylvania.

VTR team member Alex Maxey recalls Charles Ginsburg: "Everyone should have the opportunity in life to work for someone like Charlie Ginsburg …. Moreover, they should have such a dear friend … 'warts and all'."

Fred Pfost remembers him this way: "Charlie Ginsburg was a very fortunate person and we were all fortunate to know him and to benefit from his wisdom.

"… [It was] not his technical skills but his innate personality characteristics that allowed him to extract the finest from those who were associated with him. He also could smooth the troubled waters that occasionally deluge progress, and he could promote peace in a tribe of prima donnas. We who experienced the early rushes of success in video recording still recall the excitement and pleasure of the achievement and the closeness of our group with Charlie at the helm. May these memories remain with us forever."

Ray Dolby, whose own breakthroughs in sound technology have since made his name a household word, had this to say of Ginsburg. "Charlie Ginsburg was a people person. I think that was his secret of success in leading the Ampex VTR development team. I met Charlie in the spring of 1952 and was immediately drawn to him. With a ready grin, always a new story and a chuckle, he was irresistible… .

"An aspect of Charlie's interest in and preoccupation with people was that throughout the several years I worked with him, from 1952 to 1957, he tended to see engineering in political terms and struggle. Life was always a competition between the good guys and the bad guys. Like a mother hen, he was always ready to defend his team against the unbelievers and the detractors. Throughout the project, Charlie was brilliant in persuading or cajoling management to provide his team with the wherewithal to do the work. He fought our political battles, and got us the space, the time, and the money. For these things, and for the personal interest he took in all his people, Charlie accumulated a team that was fanatically loyal to him….

"… by [the] sheer force of personality and caring, Charlie earned the affection of everyone who worked for him.

"I will miss Charlie Ginsburg. He was the best boss I ever had."

Next: Edward L. Glaser »
Memorial Tributes: Volume 7 Get This Book
× 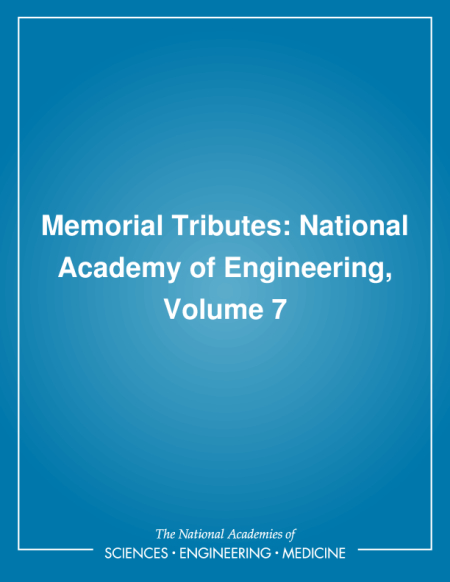