Chapter:4 A Strategy for the Future

Get This Book
Visit NAP.edu/10766 to get more information about this book, to buy it in print, or to download it as a free PDF.
« Previous: 3 Future Directions
Page 75 Share Cite
Suggested Citation:"4 A Strategy for the Future." National Research Council. 1995. Airborne Geophysics and Precise Positioning: Scientific Issues and Future Directions. Washington, DC: The National Academies Press. doi: 10.17226/4807.
×

4
A Strategy for the Future

The previous chapters focused on the scientific directions in airborne geophysics that are possible with precise positioning and on the technological developments required to pursue them. To fulfill these research objectives, certain requirements must also be met. There needs to be

As a result of deliberations based on the input it received, the Committee on Geodesy offers the following recommendations for meeting these requirements:

Recommendation 1. The new capabilities in precise positioning and accurate navigation should be made more accessible to the user community. An initiative to increase access should include both the establishment of an airborne earth science facility and a coordinated effort at educating its potential users.

A facility dedicated to airborne earth sciences would consist of instrumented aircraft that are made available to researchers for fixed periods of time. Such a facility must provide a broad range of services to meet the needs of the basic and applied research communities. In particular, it must promote the use of discovery, process-oriented, and development platforms. These platforms would give researchers the

capability of conducting broad regional surveys with one or two sensors, or high-resolution surveys with a broad spectrum of sensors. Technical development platforms allow new technologies to be evaluated and modified in order to develop accurate operational measurements. Access to each of these systems would provide fertile ground for scientific and technological advances.

Management of the facility, evaluation of proposals for the use of its aircraft, and efforts to educate the potential user community about its capabilities could be coordinated through a variety of management structures, including the following:

Models for each of these approaches exist throughout the government and academic community. For example, an interagency working group of nine federal agencies is pooling data, technology, and resources to create a data and information system for the U.S. Global Change Research Program. In the seismology community, Incorporated Research Institutions for Seismology (IRIS), a university consortium funded by government agencies, is responsible for distributing research funds and coordinating the installation of seismograph stations. DOE's Domestic Energy Initiative is an example of a university/government/private-sector partnership. Finally, a nonprofit coordinating committee, the Joint Oceanographic Community, coordinates the operations of the drilling ship the Joides Resolution for the National Science Foundation. Each of these cooperative ventures was driven by the need to access technology that is too complex, expensive, or logistically difficult to be managed by an individual investigator or agency. Airborne geophysical technology presents similar difficulties and will require the establishment of a central facility to ensure its broader use.

Existing capabilities at NASA, NSF, USGS, or the Navy could form the basis for such a government-operated facility and any number of airborne geophysical companies could provide aircraft from the private sector. As with ocean surveys, no single method of cooperation is likely

To ensure maximum use of these platforms, it is necessary to educate the potential and established user communities. Educational efforts should begin with the encouragement of collaborative projects between scientists and the federal and commercial developers of airborne geophysical technology and precise positioning. In addition, conferences that attempt to merge the small airborne geophysical community with the broader science community should be convened regularly. An appropriate forum might be a three-day Chapman Conference, sponsored by the American Geophysical Union, which would provide ample time for informal interaction and initiation of collaborative research.

Recommendation 2. Airborne geophysical measurements should be coordinated across disciplines, programs, and funding agencies to promote interdisciplinary research and to optimize use of the aircraft.

Programs in airborne geophysics are currently concentrated in a few agencies, corporations, and university departments. This segregation of effort limits both the effective use of expensive aircraft and the development of innovative research. For example, integration of gravity and magnetic measurements with major photogrammetric missions could produce significantly more data at a relatively small incremental cost. Such coordinated missions would be beneficial to both the funding agencies, which save money, and to the broader scientific community, which gains data and the opportunity to do interdisciplinary research.

Recommendation 3. To ensure uniform coverage that is sufficiently accurate to resolve both long-and short-wavelength geologic features, technological developments should aim at integrating GPS with a broad spectrum of well-calibrated measurement systems.

Uniform, accurate measurements are needed for both long-wavelength regional studies and short-wavelength process-oriented studies. Future technological developments must address both needs to ensure that airborne geophysical methods become routine tools for the scientific, resource, and environmental industries. Currently, only a limited number of accurate operational systems are routinely available. These include high-resolution airborne magnetics and photogrammetry, which are commercially available, and airborne gravity, which is available through

government, industry, and academia. Topographic mapping systems are still largely in the developmental stage and are not available for routine scientific operations.

Other technological advances should focus on the design and implementation of experiments that require multiple measurement systems on a single platform. These applications require well-calibrated, integrated operational systems. The design process should look beyond the proof-of-concept and developmental stages to the practical considerations of an aircraft survey. Integrated operational systems will place specific restrictions on equipment size, power requirements, and survey design.

Recommendation 4. In light of the serious impact on airborne geophysics, particularly for emerging industrial applications, the continuous operation of the Antispoofing system should be carefully evaluated.

The applications and technological advances discussed in previous chapters depend on access to GPS signals that make it possible to locate the aircraft's antenna to better than 1 m. When AS is on, these applications can be accomplished only if other parts of the positioning system are improved. Such improvements include replacing all but one manufacturer's existing GPS receivers with models that use a different encoded signal for positioning; installing additional ground tracking systems so that aircraft are never more than tens of kilometers away from a ground station; or coupling the GPS receiver to the inertial guidance system in the aircraft to account for the dynamics of the aircraft. Even when AS is off, very high resolution applications will require improved navigation and postmission processing. The implementation of the AS system, however, would seriously hamper improvements in these technologies. The continued use of AS must be evaluated in light of these very real civilian consequences.

Next: Appendix A: Effects of Selective Availibility (SA) and Antispoofing (AS) »
Airborne Geophysics and Precise Positioning: Scientific Issues and Future Directions Get This Book
× 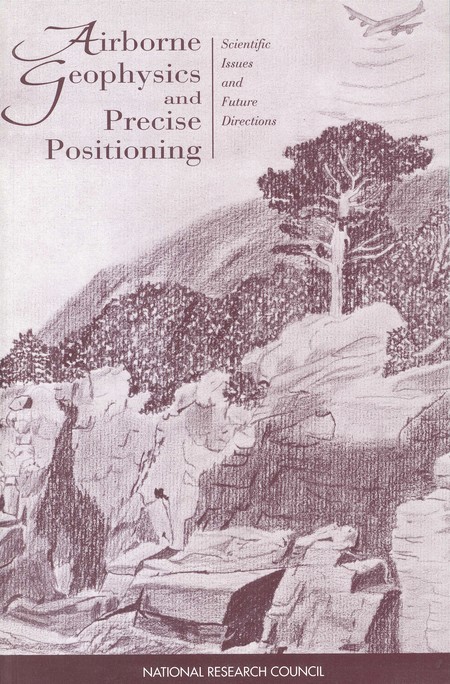 The Global Positioning System, with its capability for both precisely positioning and navigating an aircraft, has created new scientific opportunities for studying the earth. This book examines the state of the art in airborne geophysics as integrated with new precise positioning systems, and it outlines the scientific goals of focused effort in airborne geophysics, including advances in our understanding of solid earth processes, global climate change, the environment, and resources.