Rights and Responsibilities of Participants in Networked Communities (1994)

Get This Book
Visit NAP.edu/10766 to get more information about this book, to buy it in print, or to download it as a free PDF.
Page i Share Cite
Suggested Citation:"FRONT MATTER." National Research Council. 1994. Rights and Responsibilities of Participants in Networked Communities. Washington, DC: The National Academies Press. doi: 10.17226/4814.
×

Rights and Responsibilities of Participants in Networked Communities

Steering Committee on Rights and Responsibilities of Participants in Networked Communities

Computer Science and Telecommunications Board

STEERING COMMITTEE ON RIGHTS AND RESPONSIBILITIES OF PARTICIPANTS IN NETWORKED COMMUNITIES

COMPUTER SCIENCE AND TELECOMMUNICATIONS BOARD

American Association for the Advancement of Science,

In 1990, the Computer Science and Telecommunications Board (CSTB) decided to conduct a strategic forum on the rights and responsibilities of participants in networked communities. The board was motivated by the observation that participation in electronically networked communities was, even then, growing by leaps and bounds, in environments including the Internet, commercial network service providers, local bulletin boards, and company- and/or office-based networks.

In November 1992, a small invitation-only workshop was held in Washington, D.C., for prominent researchers and policy analysts to explore some of the issues that have arisen in this area; much of the background information in this report is drawn from that workshop. Participants in the workshop examined user, provider, and other perspectives on different types of networked communities, including those on the Internet, on commercial information services such as PRODIGY and America OnLine, and on grass-roots networks (e.g., those based on home electronic bulletin boards). Addressed were such questions as:

The forum, held in February 1993, had a somewhat different structure and aim. Although many of these same issues were addressed, the forum was organized around a set of hypothetical scenarios designed to illuminate how issues related to and associated with free speech, electronic vandalism, the protection of intellectual property interests, and privacy might emerge. The intent was to focus primarily on the concerns that policymakers in government and the private sector might have. As a result, much of the forum discussion involved questions of law and how the current legal regime helps to define the boundaries of what is or is not acceptable conduct on electronic networks.

The themes of the forum were heralded in a keynote speech by Congressman Edward Markey, chairman of the House Subcommittee on Telecommunications and Finance of the House Committee on Energy and Commerce. He noted the technological convergence of computer, communications, and entertainment technologies and pointed out that historical approaches based on differentiating these technologies may create problems for policymakers in the future. He underscored the importance of fundamental human values even in the new electronic medium of networks, and he argued strongly that policymakers have to address the negative as well as the positive aspects of the new medium.

This report is based on material drawn from the November 1992 workshop, the February 1993 forum, deliberations of the steering committee, and other material and events that have appeared in the interim. The workshop of the American Association for the Advancement of Science and the American Bar Association, "Legal, Ethical, and Technological Aspects of Computer and Network Use and Abuse," held on December 17-19, 1993, was particularly germane. The 1993 forum provided some background material on technology, legal underpinnings, and the then-current policy environment, much of which is incorporated into Chapters 1 through 3. Chapters 4 through 7 are devoted primarily to discussions of the scenarios. Chapter 8 focuses on the deliberations of the steering committee, although comments from other speakers and participants are liberally included. The five

appendixes provide information about network technology (Appendix A), the agendas for the workshop and forum (Appendixes B and C), Mr. Markey's keynote speech (Appendix D), and biographies of the steering committee (Appendix E).

As the report of a workshop/forum event, this report does not attempt to draw conclusions, find definitive answers, or make specific recommendations; rather, its purpose is to illuminate, to question, and to articulate thorny and problematic issues that arise in this domain, thus helping to lay a foundation for more informed public debate and discussion. Where possible, CSTB has checked with individuals quoted in this report to ensure that their quotes are used in context. The steering committee and editors are responsible for the synthesis and analysis contained in this report. In addition, Chapter 1 and Appendix A are based in part on remarks made by Mitchell Kapor at the February forum, while Chapter 3 draws heavily on Anne Branscomb's presentation to the forum and her subsequent work. Finally, Laura Ost, an independent writer, developed the initial drafts of Chapters 4 through 7, and James Mallory of the CSTB staff contributed to Appendix A. The comments and criticisms of reviewers of early drafts of this report and of its anonymous reviewers are gratefully acknowledged.

The CSTB will be glad to receive comments on this report as well as any suggestions for further work in this area. Please send them via e-mail to CSTB@NAS.EDU, or via regular mail to CSTB, National Research Council, 2101 Constitution Avenue NW, Washington, DC 20418.

Next: EXECUTIVE SUMMARY »
Rights and Responsibilities of Participants in Networked Communities Get This Book
× 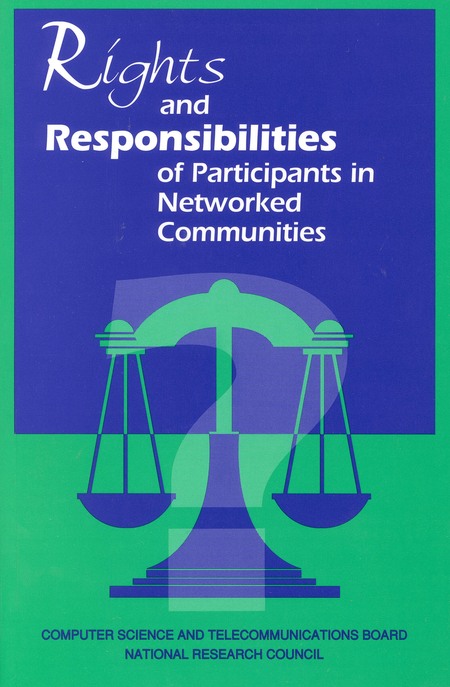 This book describes a number of social and legal issues as they relate to various members of electronically networked communities. After a brief introduction to relevant legal precedents and to the manner in which societies develop norms for social behavior, the book explores right and responsibilities related to free speech, vandalism, property interests, and privacy.