Get This Book
Visit NAP.edu/10766 to get more information about this book, to buy it in print, or to download it as a free PDF.
Page i Share Cite
Suggested Citation:"Front Matter." National Research Council. 1994. Assigning Economic Value to Natural Resources. Washington, DC: The National Academies Press. doi: 10.17226/4844.
×

The National Research Council was organized by the National Academy of Sciences in 1916 to associate the broad community of science and technology with the Academy's purposes of furthering knowledge and advising the federal government. Functioning in accordance with general policies determined by the Academy, the Council has become the principal operating agency of both the National Academy of Sciences and the National Academy of Engineering in providing services to the government, the public, and the scientific and engineering communities. The Council is administered jointly by both Academies and the Institute of Medicine. Dr. Bruce M. Alberts and Dr. Robert M. White are chairman and vice chairman, respectively, of the National Research Council.

Cover art by Terry Parmelee. The artist expresses emotion with movement, symbol, and geometric form to create a poetic and imaginative version of nature. Parmelee is represented by the Jane Haslem Gallery in Washington, D.C.

COMMISSION ON GEOSCIENCES, ENVIRONMENT, AND RESOURCES

COMMISSION ON BEHAVIORAL AND SOCIAL SCIENCES AND EDUCATION

On July 1-3, 1993, the National Research Council's (NRC's) Commission on Geosciences, Environment, and Resources (CGER) and Commission on Behavioral and Social Sciences and Education (CBASSE) convened a retreat at the J. Erik Jonsson Study Center in Woods Hole, Massachusetts. This workshop on "Valuing Natural Capital in Planning for Sustainable Development" investigated the prospects for, and problems of, incorporating natural resource and environmental assets into economic frameworks, particularly into the national income accounts (such as gross national product or gross domestic product). Within this context, the specific goals of the workshop were to identify crucial technical and conceptual issues, uncover points of consensus and controversy, chart directions for future research and action, and select areas for high priority attention.

The workshop assembled individuals with a wide spectrum of views on environmental, scientific, public policy, and economic issues (see Appendix). Attendees included prominent researchers in environmental and natural resource economics, behavioral, social, and decision sciences, and biologic and earth sciences. Commissioned papers and background articles were distributed in advance to the workshop participants. Together with the presentations, these materials were designed to establish a common basic level of understanding. On this basis, the workshop organizers hoped to increase the sensitivity of different disciplines to the concerns and perspectives of those in other fields, foster common understanding, and summarize some of the major issues of environmental accounting for scholars and policymakers unfamiliar with the debate. At the workshop, basic theoretical issues including the implications of the different concepts of "sustainability" were outlined, work in progress that applied economic techniques to valuing natural resources was presented, and procedures for representing environmental and natural resource issues in an economic framework were suggested. There was considerable disagreement about the definitions and implications of many of the concepts discussed, and no consensus emerged as to immediate remedies for the perceived weaknesses in the present system of accounting.

One major theme dominates this volume: the rationale for, and the problems faced in expanding conventional measures of economic activity to encompass changes in natural capital—that is, in the stock of renewable and nonrenewable natural resources and in the quality of the environment. Short-hand and somewhat casual references to such conceptual and staffs

tical reform ideas have sometimes employed the term "greening the GDP." Without wishing to be pedantic, we have chosen to avoid the "green" characterization. For one thing, the word suggests only the environmental part of our dichotomous concern. (Depletion of, say, copper ore is not viewed as primarily an environmental issue.) Moreover, in a number of countries, "green" frequently describes political institutions or platforms that go beyond both environmental and natural resource problems. In this overview, we therefore adopt the term ''natural resource and environmental accounting'' when discussing the problem of integrating these two elements into the prevailing system of economic measurement.

This volume includes both an overview of major issues in valuing natural capital and more technical background papers contributed by individual authors. The material presented reflects the wide variety of views and opinions expressed, at times contentiously, by those participating in the event. The overview section draws on the proceedings of the retreat, on the background papers, and on selected scholarly literature listed in the bibliography. It attempts to show the reader the lay of the land without claiming to have discovered a road map for traversing it.

The CGER and the CBASSE gratefully acknowledge the generous contributions of time and expertise by the retreat participants. Special thanks are extended to those who made formal presentations and acted as session chairs, to Alice Killian who served as reporter at the workshop and drafted the overview section with oversight from the committee, and to Morgan Gopnik and Angela Brubaker who produced this volume. It is hoped that the material presented here will help to stimulate new ideas, research, and policy formulation, and perhaps encourage further inquiry into such issues by units of the NRC.

Commission on Geosciences, Environment and Resources

Next: Overview »
Assigning Economic Value to Natural Resources Get This Book
× 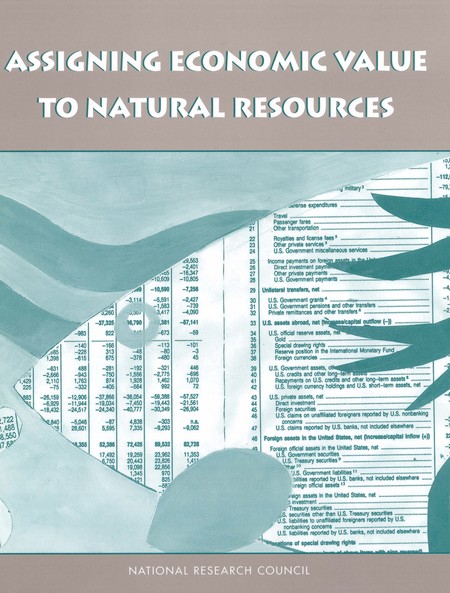 There has been a lot of discussion among policymakers, particularly within the Clinton Administration, about how to make U.S. economic indicators, such as GNP, more accurately reflect the state of the environment. This book explores the major issues and controversies involved in incorporating natural resources and the environment into economic accounts. The first section of the volume, based largely on a three-day workshop of experts in the field, explains the possibilities and pitfalls in so-called "green" accounting. This is followed by a selection of nine individually authored papers, including one by Nobel prize winner Robert Solow, that probe scientific aspects of this issues in greater depth.