Finding the Forest in the Trees: The Challenge of Combining Diverse Environmental Data (1995)

Get This Book
Visit NAP.edu/10766 to get more information about this book, to buy it in print, or to download it as a free PDF.
« Previous: 5 The Carbon Dioxide Information Analysis Center
Page 66 Share Cite
Suggested Citation:"6 The First ISLSCP Field Experiment." National Research Council. 1995. Finding the Forest in the Trees: The Challenge of Combining Diverse Environmental Data. Washington, DC: The National Academies Press. doi: 10.17226/4896.
×

The overall goal of the International Satellite Land Surface Climatology Project (ISLSCP) is to improve our understanding of satellite measurements relating particularly to the fluxes of momentum, heat, water vapor, and carbon dioxide from land surfaces. The First ISLSCP Field Experiment (FIFE), which was a pilot study for further ISLSCP investigations, had the following specific goals (Sellers et al., 1988):

FIFE was carried out over a 15 km x 15 km site in Kansas in 1987 and 1989. The site was the northwest portion of the Long-term Ecological Research (LTER) Konza Prairie Research Natural Area, a 3,400-ha tract of unploughed native tallgrass vegetation (LTER, 1991). The long-term monitoring program collected data through the entire 3-year period, complemented by four field campaigns in 1987 and a fifth campaign in 1989.

The lead agency for FIFE was NASA, with contributions from NSF, NOAA, the Department of the Interior, the Army Corps of Engineers, and the National Research Council of Canada. Ninety scientific proposals to

participate were peer reviewed, and 29 groups were selected to undertake the field studies. The investigators then met twice yearly to agree on the experimental design and on follow-ups. The cost was about $100,000 per investigator per year. Operation of the FIFE data management system consumed about 10 percent of the budget. One of the indirect benefits of FIFE was the interactions that were generated between scientists working at the very small scale (ecologists, micrometeorologists) with those working at the pixel and larger scales.

A general description of FIFE was given by Sellers et al. (1988), while accounts of FIFE information systems have been published by Strebel et al. (1989, 1990a,b). The main scientific findings of FIFE were published in the Journal of Geophysical Research (Sellars et al., 1992), but individual research results are to be found in various other journals, for example, Hall et al. (1989, 1992), American Meteorological Society (1990), and Brutsaert and Sugita (1992).

VARIABLES MEASURED AND SOURCES OF DATA

The principal investigators had varying levels of experience to guide them in the operational design of FIFE, particularly with respect to the coordinated collection of data obtained from satellites, aircraft, and ground sensors (and by 29 different research groups). A major challenge that they faced was how data collected on various spatial scales could be combined to achieve the primary research and operational goals of FIFE. Furthermore, the actual relationships among most of the observed parameters

and processes and their dependencies on scale were largely unknown (Strebel et al., 1992).

A typical example of the configuration of platforms with meteorological instruments used during FIFE included the NOAA-9 polar orbiting satellite, two aircraft, and a helicopter. At the same time, a network of ground-based stations was recording standard weather information, as well as fast-response heat flux, evapotranspiration, and momentum data (Sellers et al., 1988).

The FIFE data archive contains about 100 different types of data sets. These include satellite, aircraft, and ground-based (atmospheric boundary layer, vegetation, surface, and subsoil) observations. Totaling about 120 gigabytes, the volume of data collected by FIFE is much larger than usually encountered in typical single-investigator research. Also, while the volume of data is not large in comparison to some data archives (e.g., EROS Data Center), the diversity of data types presented some formidable management challenges. Also, data were received in both digital and analog form and in various formats, including hard copy floppy disks, and high-density magnetic tapes. During the initial planning phase of FIFE, considerable thought was given to the question of how best to organize the data archive, the net result being the FIFE Information System (Strebel et al., 1990b).

As described by Strebel et al. (1990a), the FIFE Information System "was an integrated 'organism' composed of people, hardware, and software," which, when working together, "were to facilitate the flow of data from multiple sources to multiple users." The system was driven by users' needs; that is, it had to "adaptively respond to a fluctuating mix of input data and output demands" (Strebel et al., 1990b). The initial users were the principal investigators, their graduate students, postdoctoral fellows, and technicians. There were a number of challenges to the smooth functioning of the system. Some users were highly computer literate, while others were "exposed during the experiment to a range, volume, and complexity of data and analysis capabilities an order of magnitude beyond their previous experience" (Strebel et al., 1992). Also, users' needs sometimes changed unpredictably during the course of the study. For instance, some principal investigators changed institutions, and others (or their graduate students) changed their focus in response to broadening perspectives, perhaps seeking to test hypotheses suggested in discussions with other scientists at users' meetings. Another challenge was that measurement designs were readily changed in the field, in contrast to the

Recognizing at the outset that users' needs could change, the managers of the FIFE Information System emphasized flexibility; that is, the system was designed so that it could be used to answer a whole range of interdisciplinary questions, not just the largely single-discipline ones posed by individual principal investigators. Other desired attributes of the data management system were identified as follows (Strebel et al., 1990a):

One of the operational goals of FIFE was to provide integrated analyses, and this goal was achieved. During the course of FIFE, the Information System was shown to be an effective integrator of the sometimes disparate data collection programs—satellite, aircraft, and ground-based. Some principal investigators were unaccustomed to meeting deadlines for delivery of quality-controlled data, but they came to recognize the value of rapid exchanges of data among all project scientists. In fact, the FIFE Information System was one of the most important reasons for the success of FIFE.

The entire FIFE data archive is being put on CD-ROMs (Landis et al., 1992). This data set collection includes almost all of the ground measurements and selected aircraft and satellite imagery. The FIFE CD-ROM series will make the data available to individual scientists on their desktop computers and is a cost-effective alternative to maintaining on-line archival storage. One disadvantage of a CD-ROM system (Landis et al., 1992), however, is that finding files is the slowest function of a CD-ROM drive. Although rapid advances in CD-ROM technology are eliminating this problem, speed and ease of access were gained on the FIFE prototype CD-ROM by storing the 6,000 point-data files in a highly structured directory tree that uses more than 2,000 directories.

The designers of the data management system were clearly aware of the importance of adequate documentation, or metadata. Quoting Landis et al. (1992).

In most cases the documentation must stand on its own, with nothing else to explain the instruments used, the collection methods, problems encountered, or any peculiarities of the data themselves. These files

may be the only help available to some poor graduate student given the task of using a data set. Therefore the FIFE project has standardized its documentation format around a 15-section outline, with subsections for related items. Thus analogous information can be found under the same headings in all the documents.

The evidence to date is that the metadata system is working well, making it possible, for example, for scientists not involved in FIFE to use the CD-ROMs. For example, scientists interested in comparing heat and water vapor fluxes obtained from low-flying aircraft with values estimated from ground-based instrumentation are fully satisfied with the metadata packages.

In retrospect, one failure in the design of FIFE has been recognized, namely, the decision at an early stage not to include modeling studies as a component of the field experiments. Although monitoring and modeling are iterative processes, it was decided to fund modeling studies only after the data had been collected. Strebel et al. (1992) pointed out that the result in the case of FIFE was that some important parameters were not identified and observed; there was no method of undertaking integrated data quality assurance; there was only rudimentary ability to use "quick-look" data to identify important or interesting events happening in the field in order to redirect data collection efforts; and there was no framework to set overall data integration guidelines for data system design.

Several major lessons were learned based on the views of the staff of the FIFE Information System:

From a more general perspective, quoting Strebel et al. (1992), "If there is a single lesson that we have learned in building the FIFE Information System, it is that classical data base engineering technologies will never meet the needs of large-scale interdisciplinary scientific investigations."

Despite these reservations, the FIFE Information System must be considered a success. According to Strebel et al. (1992), the FIFE data set is "a baseline study that could be revisited, for many purposes, by global change researchers and others for decades." Indeed, new users are still coming forward. For example, FIFE has provided test data for the development of a satellite processing algorithm—well beyond the original scope of the experiment. There are several reasons for considering FIFE to be a success:

Several follow-up field experiments (e.g., BOREAS) are planned for the 1990s, each with increased numbers of investigators and disciplines, increased funding, and increased volumes of data. As pointed out by Strebel et al. (1989), the FIFE experience points the way to handling a database of 500 to 1,000 gigabytes, the technology now being available "off the shelf." Strebel et al. (1989) conceive of future investigators "with high powered workstations supporting a suite of interactive database tools like those developed for FIFE. The principal investigators' workstations then become individual elements of the complete data system as distinct from a 'window' to a massive central facility."

Another important lesson to be learned from FIFE is that information scientists—that is, researchers who maintain scientific oversight for an information system—should play an essential role in the integration of data needed to carry out large interdisciplinary field experiments successfully. Finally, significant funding (10 to 20 percent of the total budget) should be dedicated to the data management activities.

Next: 7 The California Cooperative Oceanic Fisheries Investigation »
Finding the Forest in the Trees: The Challenge of Combining Diverse Environmental Data Get This Book
× 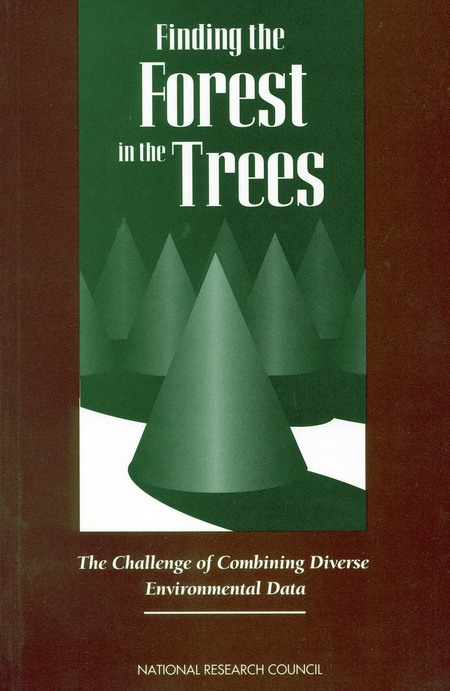 During the last few decades of the 20th century, the development of an array of technologies has made it possible to observe the Earth, collect large quantities of data related to components and processes of the Earth system, and store, analyze, and retrieve these data at will. Over the past ten years, in particular, the observational, computational, and communications technologies have enabled the scientific community to undertake a broad range of interdisciplinary environmental research and assessment programs. Sound practice in database management are required to deal with the problems of complexity in such programs and a great deal of attention and resources has been devoted to this area in recent years. However, little guidance has been provided on overcoming the barriers frequently encountered in the interfacing of disparate data sets. This book attempts to remedy that problem by providing analytical and functional guidelines to help researchers and technicians to better plan and implement their supporting data management activities.